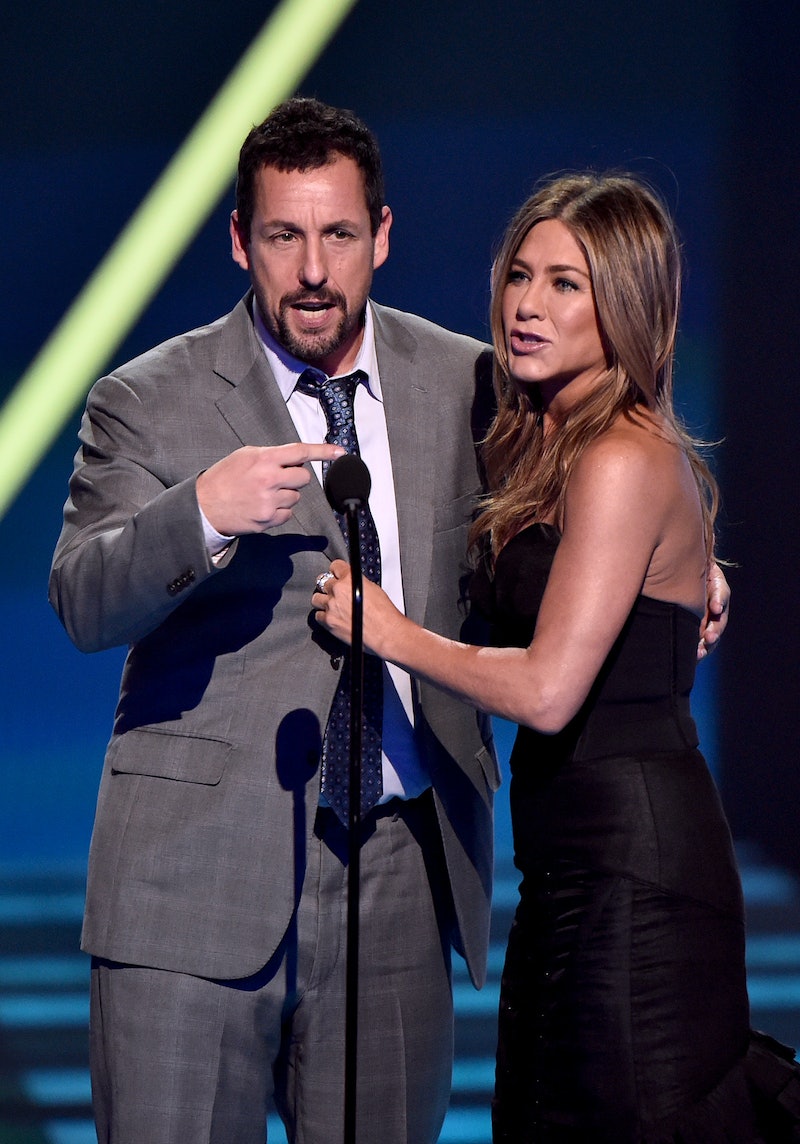 It seems Brad Pitt wasn't the only one glued to a TV during Jennifer Aniston's 2020 SAG Awards acceptance speech. Following the Sunday, Jan. 19 awards show, her Just Go With It and Murder Mystery costar Adam Sandler responded to Aniston's SAGs shoutout on Twitter. While collecting her Actor statuette for Best Actress in a Drama Series, The Morning Show star had seemingly addressed Sandler's Uncut Gems 2020 awards season snubs, saying: "Adam Sandler. Your performance is extraordinary and your magic is real, buddy. I love you."

Sandler, who was not present at the awards show, kept the love fest going from afar. "Congrats to the great Jen Aniston for her SAG award and her just being the best," he tweeted, along with a photo of her on stage Los Angeles' Shrine Auditorium. After all, it was quite the accomplishment: It was Aniston's first SAG Award in nearly 25 years. (She'd previously won with the Friends cast in 1996.)

Also getting an acknowledgement in Aniston's SAGs acceptance speech was her "partner in crime" and Morning Show costar Reese Witherspoon. "I love you, girl. It took 20 years, but we did it," gushed Aniston. For her part, the actor, who plays Bradley Jackson on the Apple TV+ series, also responded to Aniston on Twitter, writing, "You are incredible!!! 💫🙌🏼 My partner, sister, friend... there are not enough words to describe my admiration. So deserving!!"

Aniston's friendship with Sandler actually goes back further than those 20 years. During a May 2019 appearance on ABC's Jimmy Kimmel Live!, Sandler explained they first met over breakfast at Jerry's Deli around 1990 or 1991 when she was dating one of his friends. "We were friends before Friends," Aniston quipped of their longtime "love" for each other. "We must have been real family in another life."

Sandler agreed during the interview with Kimmel, explaining that they're "so comfortable with each other" and have spent time with the each other's biological families, too.

So it comes as little surprise that Aniston would be so supportive of her pal, after his widely praised Uncut Gems performance as Howard Ratner was shut out from the Golden Globes, SAG Awards, and Oscars. Sandler seemed to take the perceived slight in stride, however. "Bad news: Sandman gets no love from the Academy. Good news: Sandman can stop wearing suits," he tweeted on Jan. 13 after the 2020 Oscar nominations were announced.

The actor also sent congrats to "all my friends who got nominated, especially Mama," aka Kathy Bates, who played the overprotective mother of his character, Bobby Boucher, in the 1998 comedy The Waterboy. "You was robbed!! But Mama loves you!!!" Bates — who received an Oscar nod for her role in Richard Jewell — tweeted back, in character, on Jan. 13. "I learned a new urban slang word for you! You da GOAT!! Not the one we eat at home, Son. ❤️😎🐐"

Aniston clearly wasn't Sandler's only former costar incensed by his omission. As she exhibited at the SAG awards, however, she will always be there for her friends — and Sandler is so here for it.