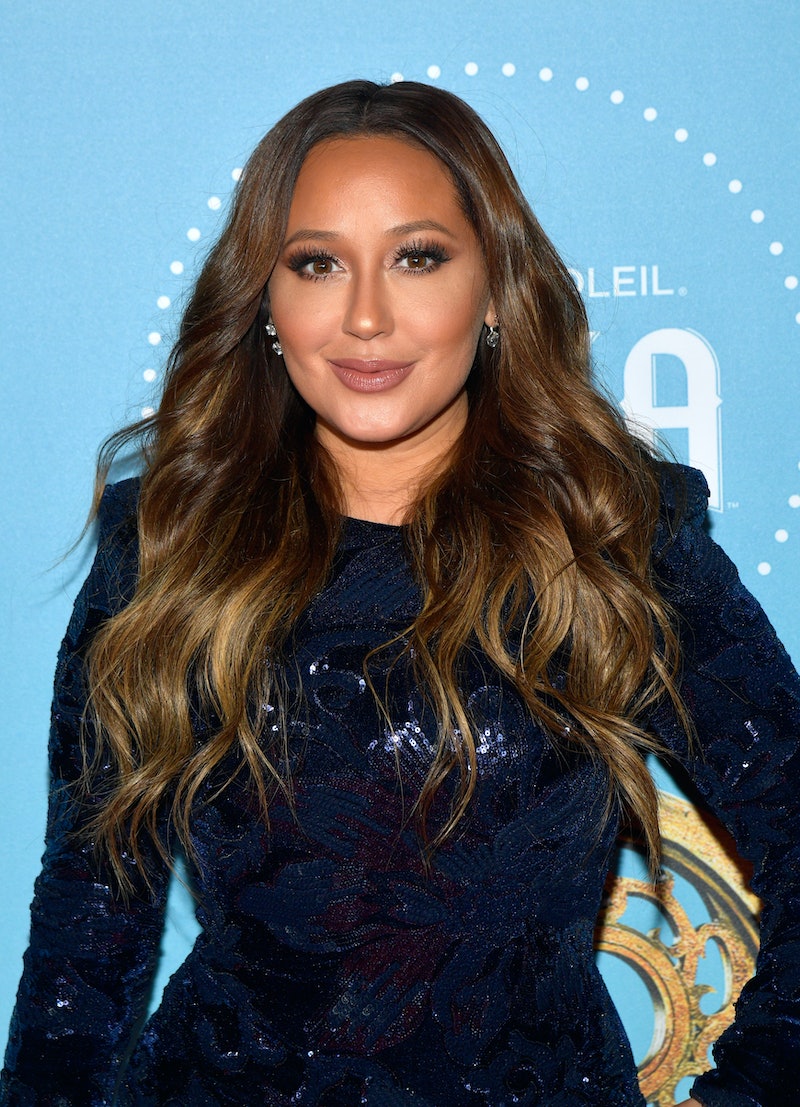 During Wednesday's episode of The Real, talk show host Adrienne Bailon confirmed the Khloé Kardashian and Tristan Thompson split rumors are true — or so she claims. As pointed out by Elite Daily, Bailon told the audience she received confirmation firsthand from an apparent trusted source that the cheating allegations involving Thompson and Jordyn Woods, Kylie Jenner's best friend, are fact not fiction. Kardashian and Thompson's split hasn't been officially addressed by the couple. That said, Us Weekly and E! News confirmed Kardashian and the professional basketball player have recently split. Woods and Thompson also haven't commented on the cheating rumors.

At this time, Bailon's "confirmation" is only secondhand knowledge. (Bustle previously reached out to reps for Thompson, Kardashian, and Woods, but did not receive an immediate response.) While discussing the breakup and cheating rumors that first made headlines on Feb. 19 from TMZ and Hollywood Unlocked, Bailon said,

Again, the former Cheetah Girls star didn't divulge her source, but for those unaware, Bailon has a close connection to the Kardashian-Jenner family, as she dated Rob Kardashian from 2007 to 2009. Bailon made several appearances on Keeping Up With the Kardashians. She also stayed friends with Kim Kardashian and Kourtney Kardashian.

"I just have a hard time understanding this. If I'm honest, I think that blame should be obviously put on both parties. But at this point, it looks like Tristan just has a problem. There's something wrong. There's a deeper issue here."

Bailon's cohost, Loni Love, disagreed with her and said about Thompson, "It's called, 'I got money, I got b*tches, that's what I want.' That's what it's called."

All the way back in April 2018, Thompson first made headlines for reportedly cheating on Kardashian in October 2017 while she was pregnant with their first child, True, who was born last April. Later on, the two also seemed to reconcile. (Kardashian appeared to previously reference these particular cheating allegations, but Thompson never did.)

Per E! News' report from Feb. 19, Thompson responded to TMZ's cheating claim by tweeting and deleting a message that read, "FAKE NEWS." As for Kardashian, she hasn't directly commented on either the breakup or cheating rumors. That said, she posted emojis on an Instagram post from Hollywood Unlocked, which alleged Woods and Thompson spent time together at a party recently.

Furthermore, on Feb. 21, Kardashian shared several posts on her Instagram Story referencing the breakup. She posted three quotes, with one reading, "Somebody needs to hear this...That betrayal was your blessing!!!" Another one read, "If they ask you about me, tell them: 'She was the only person that loved me with honesty, and I broke her.'"

If Bailon's source is correct, the rumors may be true after all. And either way, there's no denying that Kardashian is dealing with a truly unfortunate situation right now, having all of this play out in the public eye.