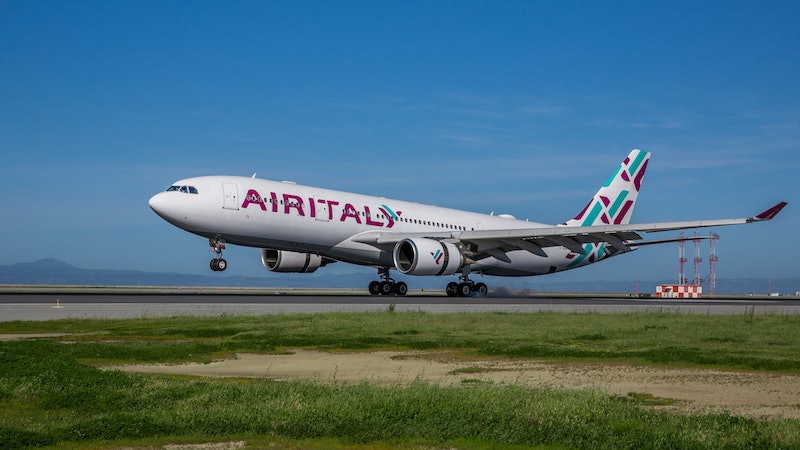 This is a huge step for non-binary gender representation: According to a press release, Air Italy revealed it's the first European airline to offer a non-binary gender option for customers who are booking flights through its website. While we still have a long way to go when it comes to non-binary acceptance, this is still a big deal when it comes to normalizing the idea that gender is fluid, and not always restricted to just one male and one female option. Hopefully, more airlines follow Air Italy's suit.

Beginning in June 2019, customers flying Air Italy will have three choices when they're choosing their gender while booking a flight on the airline's website: M (male), F (female), or X (other). There will also be a "Mx" title option when people input their names, instead of just "Mr." or "Ms." This is the first time a European airline has introduced non-binary gender options on its site, despite the fact that the International Air Transport Association approved the inclusion of non-binary gender options in booking processes in 2018.

In a press release, Air Italy Chief Operating Officer Rossen Dimitrov said, "Air Italy is determined to lead the industry in inclusivity, and we are so proud to be the first European airline to offer these inclusive booking options for our customers."

Dimitrov added, "Air Italy’s brand tagline is — Imagine the world differently. Within this is a vision that embraces every manifestation of freedom, inclusion, the acceptance of diversity and striving for progress. Our introduction of non-binary options on our website is therefore another demonstration of these important values."

Again, though, this is far from appropriate representation for people who identify as non-binary. Though the gender options now exist on Air Italy and United's sites, customers who select it will still have to ensure it corresponds with the gender on their passport — or, they could run the risk of being unable to fly with the ticket they purchased. While more and more states are starting to offer non-binary birth certificates and IDs, this, unfortunately, doesn't take into account those who identify as genderfluid, and would not identify themselves as having a fixed gender.

In order to fully represent those who identify as non-binary, a lot more work needs to be done to take into account the nuances of what it means to be non-binary — including the idea of identifying as genderfluid. However, Air Italy's introduction of the new gender option is still a good step in the right direction — and, hopefully one that other airlines will follow in the footsteps of soon.