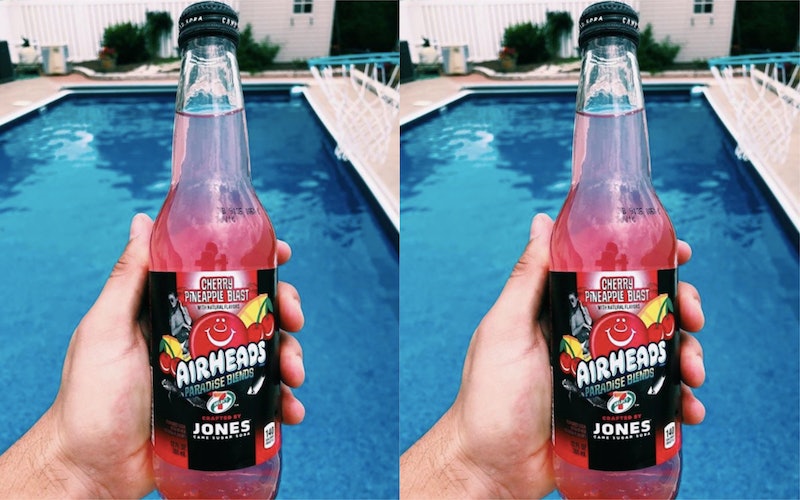 Strap in for some sugary nostalgia — because there's a whole lot of both coming your way. In fact, in my opinion, it may be a little too much of both. But if you were a big fan of Airheads, the confusing taffy-like candy that managed to taste like everything but also nothing, then you're going to love the fact that Airheads-flavored soda is now a real thing. And it's at participating locations of 7-Eleven — of course it is, where else would it be?

Jones Soda Co. is a company that specializes in eclectic soda flavors — everything from bubblegum to crushed melon to... bacon. Yes, they really made a bacon-flavored soda once. The company has joined forces with 7-Eleven to bring you Airheads Paradise Blends, a range of sodas based off of Airheads and, as the name suggests, with a blended twist. So far the Cherry Pineapple Blast flavor has made an appearance, but I'm holding out for a White Mystery flavor (my favorite as the very wise child that I was) and also the blue one... I have no idea what flavor it was ever meant to be, but I remember it very fondly because of the blue stains that still stick to my tongue.

Airheads were definitely a bit of a love 'em or hate 'em candy in their heyday, so it will be interesting to see how fans respond to their new soda form. Some people are already proclaiming their love on social media — so it looks like we may have a trend on our hands.

Keep an eye on the #7SELECTxJONES hashtag to see if any other Airheads flavors appear — or just to see the weird and wonderful things they get up to. They've had Sour Patch sodas and other delights available at 7-Eleven in the past, so it's worth keeping tabs on their new offerings — especially if you have a sweet tooth.

Luckily, if you're a '90s kid at heart who just can't get enough of all of that sweet, sweet '90s nostalgia — or candy — there are a lot of options that address both your sweet tooth and memory lane in one swoop. We've seen an explosion of '90s candy reimagined recently, from Sour Patch Ice Pops, which are definitely the most extreme popsicle experience you can imagine, to the appearance of Ring Pop Gummy Gems, which are a big twist on a total blast from the past.

Some options are a little more mainstream — like Kit Kat Drumsticks, which are an incredible ice cream combination that will make you remember yesteryear but also work as a perfect treat on a hot summer day. Even Dessert Toppers, mini-candies to top your ice cream at home, cashed in on the '90s trend, featuring Nerds, Butterfinger, and little Crunch bits. Basically, food companies have realized that our need for the '90s is strong — and they are more than happy to deliver.

When it comes to soda, there are some purists who like to stay to a few tried-and-true combinations — but there are definitely others who are happy to try new things and love the flavor experiments. If you're happy to think outside the box, keep an eye out at 7-Eleven for Airheads Paradise Blends — a mouthful of '90s wonder awaits.