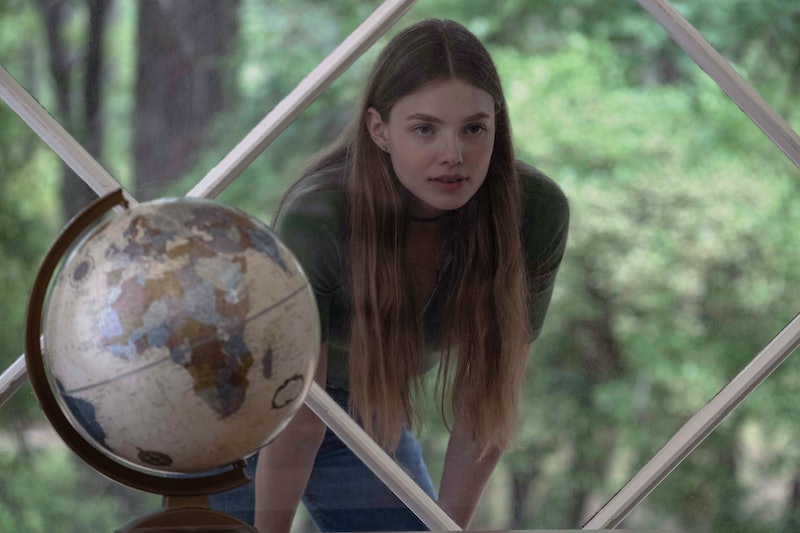 Author John Green has been vocal about the fact that his first novel, Looking for Alaska, draws heavily from his own experiences as a teen, and that the titular Alaska is based on a real person he knew at his Birmingham boarding school. However, he's also been clear that many of the details have been changed or fabricated entirely. And considering the events that unfold in the book, it's understandable that Green hasn't spoken much about the girl who inspired the character all those years ago.

Even if you haven't read the novel, the trailer for Hulu's new TV adaptation is pretty explicit about the fact that something life-altering happens to the mysterious Alaska Young. It's difficult to discuss without spoiling anything for new viewers, but suffice it to say that an event occurs that shakes up Miles' (a stand-in for Green) friend group and becomes the focus of the story. "She made us accomplices, Pudge, and we have to live with that for the rest of our lives," Miles' friend says in the trailer.

On the FAQ page for Looking for Alaska, Green was asked if Alaska was based on someone he knew, to which he responded that he "dislike[s] answering [the] question honestly." He also said some of his old classmates were "understandably upset" about the ways in which the novel reinvented real events, but that Alaska is indeed based on someone he knew at his boarding school.

Essentially, the defining event involving Alaska that happens in the book happened in real life, though obviously the particulars — the whys and hows — are different. Green also noted that his "relationship with her was nothing like Pudge's relationship with Alaska" but that his "Alaska" was someone he "liked and admired a lot," and he still doesn't "feel reconciled to what happened."

Somebody else on the FAQ asked a similar question — "Did you know an Alaska" — to which Green simply answered that "that is the rare question that is too personal."

In a March vlog, Green took the cast and crew of Hulu's Looking for Alaska to visit his old school, which Miles' and Alaska's Culver Creek Prep School pretty much mirrors. There, he reflected on why he's struggled to let go of this particular story — his first, but also his most personal.

"When you write a book, you have to let it go at some point ... but Looking for Alaska was always different for me," he said. "The truth is, I wrote the book because I wanted to go home, by which I mean the fall of 1993. Maybe through fiction, I would be allowed back into the home from which time and loss had expelled me ... but what I learned along the way is that novels do not solve problems or heal wounds."

It's clear that writing Looking for Alaska was a very personal and even painful undertaking for Green. The show adaptation is in the hands of new writers though, and Green sounds ultimately optimistic in his vlog about the retelling.

"I felt myself letting go at last," Green said, explaining that the new actors and writers perhaps even knew Alaska better than he does now. "It's their story now."

More like this
Nicola Coughlan Shared A Lady Whistledown Excerpt From ‘Bridgerton’ Season 3
By Grace Wehniainen, Alyssa Lapid and Sam Ramsden
An 'Everything Everywhere All At Once' Star Just Joined The 'Loki' Season 2 Cast
By Grace Wehniainen
Alicent's Green Dress In 'House Of The Dragon' May Be An Act Of War
By Kadin Burnett
The New Bachelor Will Be Announced Next Week & Here Are The Top Contenders
By Grace Wehniainen
Get Even More From Bustle — Sign Up For The Newsletter