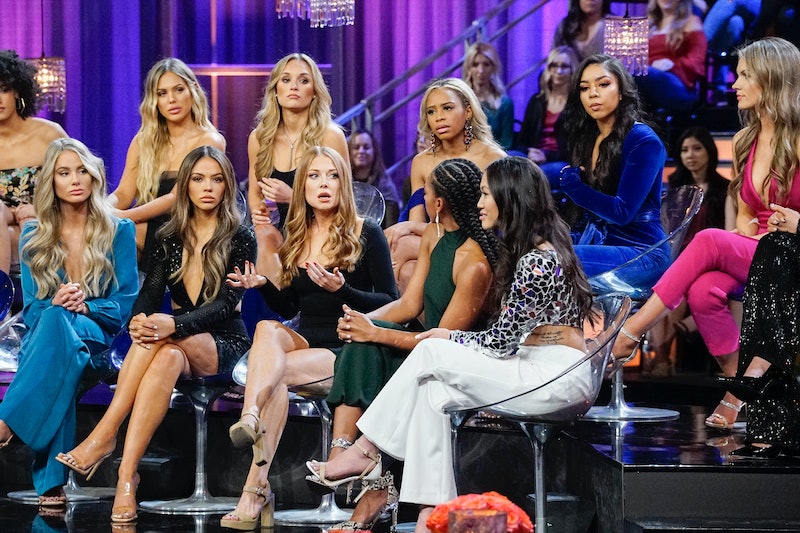 In a Bachelor season full of villains, Alayah and Tammy were standouts. And yet, now that it's over, both want you to know that no matter what they say when the cameras are on, they have each other's backs. Both Alayah and Tammy's Instagrams about their fellow Bachelor contestants, shared just before the Women Tell All on March 2, were all about the love and respect that the women have for one another.

People like Victoria P. and Sydney may never be besties with Alayah. And there's certainly no love lost between Kelsey and Mykenna when it comes to Tammy. Yet, both Tammy and Alayah are insisting that their relationships with the other women aren't as bad as depicted on The Bachelor, or even on the Women Tell All.

"Yes, we may have disagreements but that's the beauty of this kind of friendship," Tammy wrote in part, likening their relationship to a sisterhood. "We're here to challenge each other, check each other, and support each other." Tammy had previously apologized for hurting her fellow contestants — although she notably said she didn't need to say sorry to Mykenna on Women Tell All. But this time, she made sure to say that this post was intended for "EVERYONE involved."

Alayah also posted some photos of the women hanging out at the Women Tell All afterparty and had a similar message to share. "Do we argue a lot? Yes. Do we each have opinions and want to be heard? Yes. Do we sometimes let things get out of hand? Yes. Do we hate each other? No," Alayah wrote. She pointed to the shared experience of being on The Bachelor, and said while they won't always see eye-to-eye, "We always have each others [sic] backs."

Meanwhile, Victoria P., who entered into the fray when she seemed to deny knowing Alayah in their pageant past, shared a post focused on the women's unity. She claimed that she is "a better 'me' because of each of them and their unique stories." And Lexi, who had called out Alayah's "fake" side during Women Tell All, also shared in her Instagram story how the women fight like sisters but also defend each other like sisters.

And, if photos of the Women Tell All afterparty are any indication, the women did have fun together following the taping.

Not everyone believes the sincerity of the captions in these Bachelor "villains" posts. The morning after the Women Tell All, Tammy took to Twitter to vent about the hate she had received after the episode. "The hate messages I'm still getting makes me sick to my stomach to even touch my phone," she wrote. "I hope you're happy. Thanks." So, unfortunately, while the women of Peter's Bachelor season are preaching love and support after their dramatic season, some viewers aren't following that message.