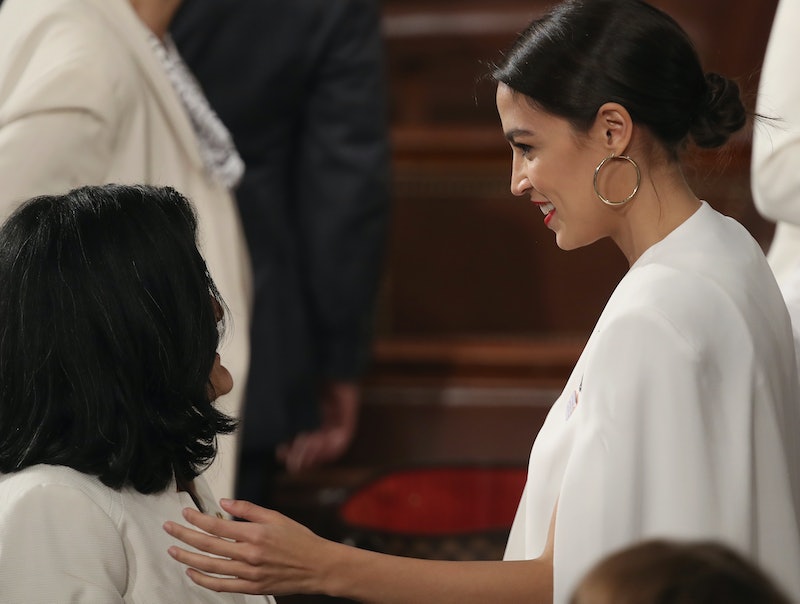 As President Donald Trump addressed the nation on Tuesday night, some members of Congress looked more enthusiastic than others. Rep. Alexandria Ocasio-Cortez's State of the Union reactions were particularly somber — and that bothered some pundits.

"AOC had a rare bad night, looking not spirited, warm and original as usual but sullen, teenaged and at a loss," Wall Street Journal commentator Peggy Noonan tweeted. Ocasio-Cortez was quick to respond. "Why should I be 'spirited and warm' for this embarrassment of a #SOTU?" she fired back. "Tonight was an unsettling night for our country. The president failed to offer any plan, any vision at all, for our future. We're flying without a pilot. And I'm not here to comfort anyone about that fact."

Ocasio-Cortez's underwhelmed reactions to the speech went viral on Tuesday. The State of the Union is always heavy on optics: Members of Congress conspicuously stand and clap when they agree with the president's words, and remain silent when they don't. But even during parts of the speech that had most of her Democratic colleagues on their feet, Ocasio-Cortez was seen sitting motionless. As The New Yorker's Vinson Cunningham described it, "At most points during the night, she looked sincerely forlorn."

After one moment in particular — when Trump called on Congress to "reject the politics of revenge, resistance, and retribution, and embrace the boundless potential of cooperation, compromise, and the common good" — Ocasio-Cortez's stony-faced response sparked a GIF that went viral.

Like many female members of Congress, Ocasio-Cortez dressed in white to draw attention to women's issues on Tuesday. The choice was inspired by suffragettes who wore white while advocating for women's right to vote in the early 20th century. The Washington Post reports that the color has been used as a statement for female politicians ever since. Shirley Chisholm donned a white blazer for posters advertising her groundbreaking presidential bid in 1972, for example. And Hillary Clinton wore white when she accepted the Democratic nomination for president, debated Trump for the third time, and attended his inauguration.

Ocasio-Cortez also used the high-profile event on Tuesday to make several other political statements. For one, she wore a pin with a photo of Jakelin Caal, the 7-year-old Guatemalan girl who died while in the custody of Border Control in December. And as for her guest (members of Congress are permitted to bring someone to the event, often chosen to highlight a specific issue), she picked Ana Maria Archila, one of the women who confronted Jeff Flake in an elevator during Brett Kavanaugh's confirmation process.

But you didn't have to watch the conversation with MSNBC to know how she felt. It was written all over her face.