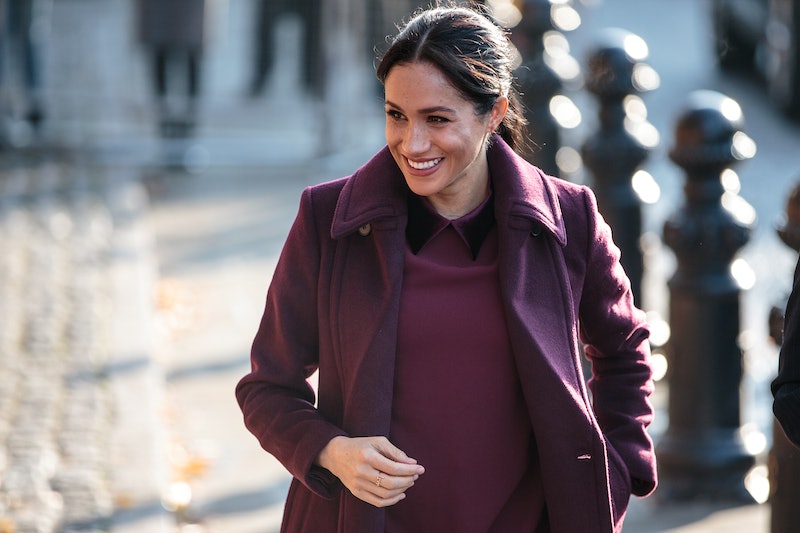 From monochromatic looks to daring nail polish colors, Meghan Markle's holiday-inspired outfits have been major. The Duchess of Sussex has basically been a fashion favorite since the announcement of her engagement to Prince Harry early last year, and her holiday looks are definitely solidifying her place as one of the most watched members of the royal family. With a seemingly bolder style than royal fashion watchers have seen before and what seems to be a serious eye for fashion, it's not really a surprise that her holiday ensembles have been bangers.

While Markle's Australian tour may have had the most diversity when it comes to fashion, none of it was holiday attire. After all, seasons are opposite on the other side of the world which meant fans saw Markle in everything from a thigh-high split maxi dress to espadrilles. The ensembles were certainly exciting and presented another opportunity to see the duchess's style choices, her holiday outfits are what are going to have you running to your nearest mall.

Through out the holidays, Markle has had several formal events that called for some serious glamour as well as glamorous gowns to modern looks and of course, perfect coats, basically everything she's worn you'll want in your Christmas closet.

Markle's holiday looks kick off in mid-November when she attended a church service for the UK's Remembrance Sunday. The day is dedicated to military members who have given their lives in service. For the more somber occasion, Markle wore a navy two-piece ensemble featuring a belted, double breasted jacket and pencil skirt complete with a beret.

You're definitely thinking about adding a beret to your wardrobe now, right?

For Prince Charles's birthday celebration, Clarence House released photos of the royal family. While it's hard to take your eyes off just how adorable the royal kiddos are, Markle's Givenchy dress is exactly the kind of frock you need for the office during the holidays — just definitely not at the same price tag.

One of Markle's most glam looks during the holiday months is definitely this Safiyaa gown (offers sizes 2-14). The gorgeous black and white printed bodice and belt are everything, and the full length skirt is perfect.

When it comes to festive attire, Markle's Club Monaco look (offers sizes 00-12) when she visited the Hub Community Kitchen may just take the cake. the burgundy tones, the velvet details, it's basically screaming holiday.

5. Givenchy At The British Fashion Awards

Markle's most recent holiday ensemble is a black-tie dream. The one-shoulder Givenchy gown featured a somewhat daring slit, and basically everyone lost it over Markle's dark nail polish. Basically, not only will this dress inspire you to rock a one-shoulder look for the holidays, but it'll encourage you to get a manicure, too.

Thankfully, the holiday season isn't over quite yet which means that there's still time for Markle to debut new holiday outfits. With Christmas on the way and the royal family's traditional Christmas Mass coming as well, there's sure to be more looks from the Duchess of Sussex.