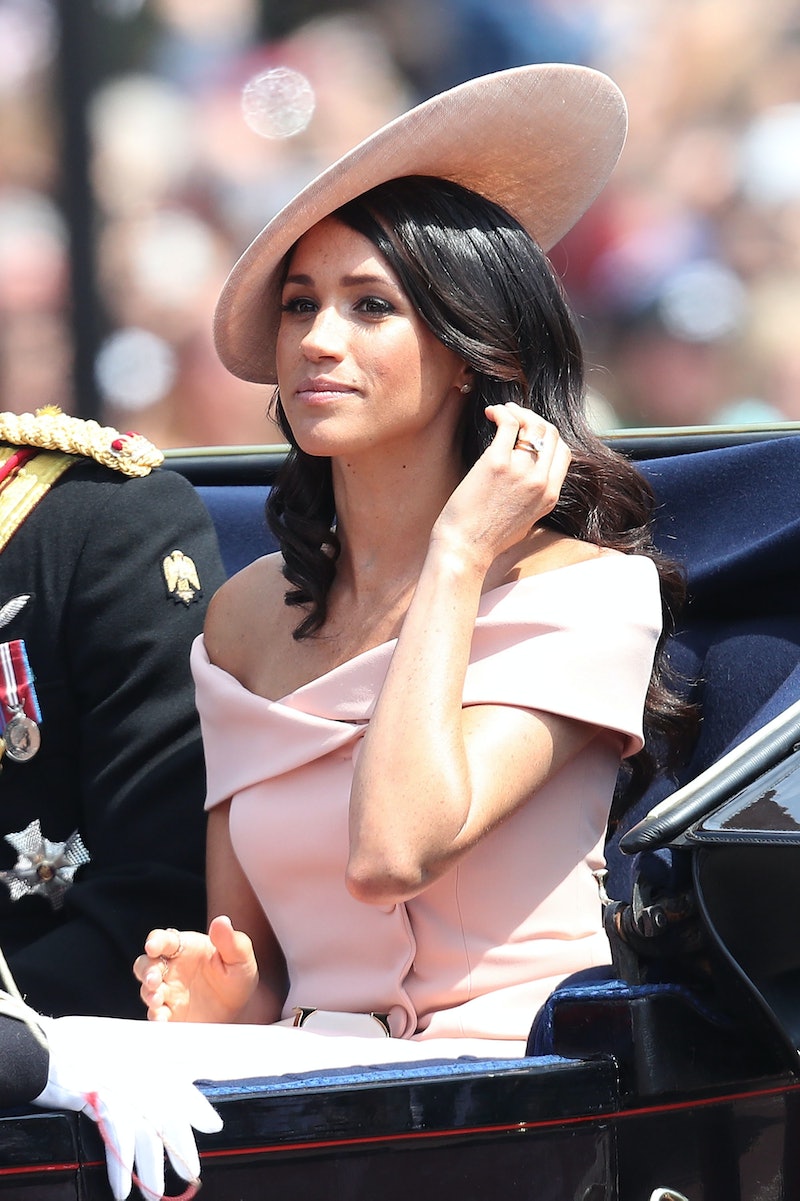 Meghan Markle is a royal rebel. That's because she breaks some of the rules — many of which are implied, unwritten, unspoken, and unconfirmed — every now and again. Meghan Markle has broken royal protocol several times since *officially* becoming a duchess in May. Markle broke protocol before she and Harry swapped vows, too.

But it's always done in measured doses. It's not like she's going out and getting full sleeves of tattoos. She often adheres to palace preferences all the while retaining her own fashion flair. She sometimes eschews long-held and not-always-set-in-stone protocol in the most sophisticated ways. Her breaks with protocol never feel ostentatious or flashy and she never veers too far from her chic and classic style.

Basically, Markle is more of a rule bender than an out-and-out rule breaker. Some of her moves might seem super minor and blink-and-you'll-miss-them. Others are more noticeable and obvious. But all are classy.

While Markle's role as a royal means she has to follow a whole host of rules and regulations that would blow most of our minds, she navigates them with her signature grace.

Markle has broken with Buckingham Palace's traditions on both the fashion and beauty fronts.

Whether it's showing off a body part or utilizing a beauty product that isn't typical of royals, Markle has shown a predilection for doing her own thing.

Below are all the times Meghan Markle has broken royal protocol since becoming the Duchess of Sussex.

Markle wore a black Givenchy dress while attending the 2018 British Fashion Awards. Royals don't do black very often, according to InStyle's interview with UK etiquette experts The English Manor. So this was a surprise hue. The dress also exposed a shoulder, which is widely reported as something the Queen frowns upon according to The Sun.

At the same event, Markle paired her black dress with a matching mani. That's something we've all done at least a dozen times, right? Dark polish is normally a "no no" at royal engagements, as light, non-flashy colors are reportedly preferred by the palace. Royal correspondent Omid Scobie told Harper's Bazaar why Markle's choice of nail polish was a bending of, rather than breaking with, protocol. "There's no actual protocol about dark nail polish," Scobie said. "It's simply about being appropriate — we'd never see this at a royal engagement. But tonight's event is a celebration of fashion and there's a lot more flexibility on what one can wear."

At the Trooping the Colour ceremony in the spring, which was her second official engagement, the Duchess stunned in a bespoke 'n' blush, Carolina Herrera ensemble. The off-the-shoulder shape went against the unwritten rule that royals cannot reveal their shoulders, as widely reported by The Sun. Her elegant Givenchy wedding gown had a similar construction. But she technically wore that infamous frock before she married into the family. So it wasn't a true break with protocol...

... but it kinda was. While she was marrying into the family, it was ultimately her "Big Day" and she still did her thing. The boat neck showed off a good portion of her collar bone and the tops of her shoulders. She made breaking protocol look so darn stunning.

Markle's Reformation dress, which she wore during a beach outing on her and Harry's October 2018 tour of Australia, pushed protocol, too. The thigh-high slit was daring by conservative royal standards — even if it seemed rather tame and barely registered a blip for the rest of us.

Markle Sparkle is a real and actual thing. Royals don't typically wear highlighter. It's essentially an unwritten rule but you rarely see Kate Middleton contouring, strobing, or gleaming out her features a la a KarJenner. But the Duchess added sparkle and shimmer to her visage this past summer. She added a dose of dewy, rose gold glow to her cheeks. She looked gorj — because of course she did.

Markle has been rocking her signature messy bun on the reg — pretty much ever since her engagement to Prince Harry.

While PEOPLE notes that the royals prefer a sleek, polished 'do and Middleton has worn hair nets to keep her coif in place, Markle loves loose, face-framing pieces. It's definitive and darling.

Markle has often ditched the supposed regulation nylons and/or tights in favor of bare legs. She showed off legs for days in a sexy, tuxedo-style LBD with black heels — minus the pantyhose— at a Hamilton screening. Harper's Bazaar reports that it's believed that royals are expected to wear hosiery when out in public since both the Queen and Middleton do just that. Allegedly, there's no official pantyhose protocol, though. "There are no rules for royal women regarding pantyhose. While most women (royal or commoner) wear pantyhouse with suits or gowns for a good slim line, it is not required by any decree from the Queen," royal expert Marlene Koenig told Harper's Bazaar.

The Duchess looked amazing in this brown, striped maxi dress paired with espadrilles. However,Vanity Fair reported on Kate Middleton's preference for high heels back in 2015. A source told the mag that "the Queen isn't a fan of wedged shoes. She really doesn’t like them and it’s well known among the women in the family." So this footwear appears to be another way Markle sidestepped unspoken protocol.

Markle continues to bob and weave when it comes to royal protocol. She often sticks to palace preferences — light nail polish, sleek hair, and hosiery. But she also does the total opposite.

She's a sartorial rebel through and through.