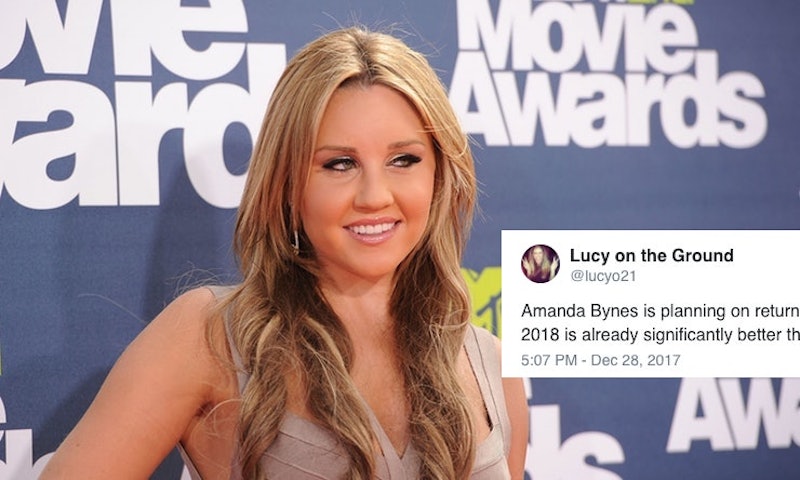 Coming in just before the New Year's celebrations commence, good news about Amanda Bynes is hitting the airwaves. According to PageS ix, Amanda Bynes may be making a comeback in 2018, including plans to return to acting. And, of course, fans can't help but to be excited about the potential return.

As you may recall, Bynes took a break from the public eye altogether in October 2014, after reportedly being placed on a 72-hour psychiatric hold. The hold came not long after Bynes began making headlines for erratic and unusual behavior, both in public and online. From totally changing her appearance to apparently look more like Blac Chyna, to writing some disturbing tweets including asking Drake to "murder" her "vagina" and calling the Obamas ugly, Bynes definitely left her diehard fans both confused and worried about her mental health. It turned out to be a much-needed hiatus, however, because Bynes has been able to work on both her sobriety and career aspirations.

According to a June 2017 interview, in which Bynes spoke exclusively with Diana Madison of Hollyscoop, the actor has been sober for three years, and has devoted a lot of her time to finishing a fashion degree at FIDM. In the interview, Bynes raved about her the Los Angeles-based school, saying, "I love it. I've learned how to sew, I've made patterns, and I want to start a clothing line in the future." And along with concentrating on fashion, Bynes said that she also enjoys spending time outdoors. Well, Page Six also reported that Bynes is still on the right path, and even on track to finish up her fashion degree in the new year.

Along with ripping the runway in the near future, Bynes' lawyer also announced that the Nickelodeon star could also be "dipping her toe back into acting." Her attorney continued to Page Six, saying, "She has had several offers but is waiting for the right one to come along for a comeback."

One of those offers was for the 31-year-old to make a return to the 1999-2002 hit The Amanda Show. According to Page Six, Nickelodeon execs had been trying to reach Bynes for a potential revival recently, but it's unclear whether or not they were successful in doing so. Who knows, maybe returning to the Nickelodeon show wasn't on Bynes' radar at the time. But it's nice to hear that she hasn't totally decided to step away from the industry.

Bynes' last role on the big screen took place in 2010's Easy A, in which the actor played the God-fearing high schooler Marianne, opposite Emma Stone. So knowing that Bynes is actively considering a comeback, after taking eight years off, is music to a lot of her fan's ears. Upon hearing about Bynes' progress and intentions to head back to acting, folks took to Twitter to rejoice.

Seriously, with all of the negative energy taking over the airwaves lately, it's nice to have something good to look forward to. Bynes is a total talent, and not having her around definitely left a void in the comedy train — whether some will admit it or not.

A full revival of The Amanda Show may not be on the horizon, but Bynes did also mention in the Hollyscoop interview that making cameos on some of her favorite programming could be a possibility. That goes to show that the actor plans on taking things slow, while prioritizing her passion for fashion. And seriously, who can blame her?

It's unclear what drove Bynes to taking a hiatus, but one could only imagine that industry pressures could have played a part. Either way, it's amazing to hear that Bynes is ready to get back to her craft, even if it's just by "dipping her toe" in the pool of opportunities. The year 2017 hasn't even ended yet, but 2018 is looking oh, so bright.