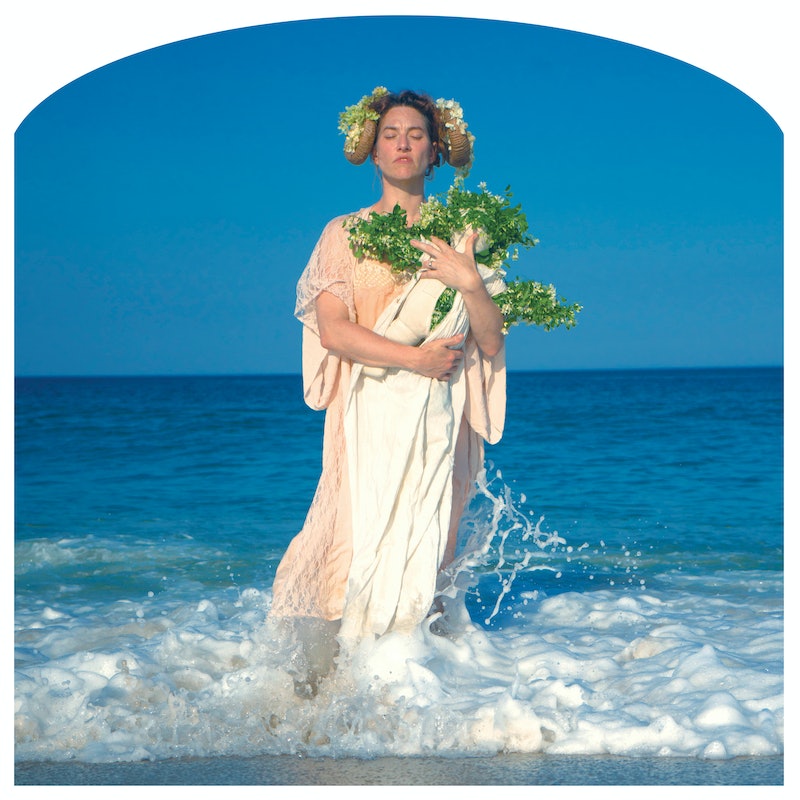 When I wake up in Woodstock, New York on a March morning, it's to the sound of Amanda Palmer’s new album, There Will Be No Intermission. Just a few rooms away, the musician is playing the full record for the first time for her husband of nearly eight years, author Neil Gaiman. When Palmer and I convene later in her writing studio, she tells me that she and Gaiman lay on the floor together that morning, taking turns weeping to the new music. This album, she says as we sit by the fire, is a retrospective of the past seven years of her life. And that includes the two abortions she had during that time, experiences that are chronicled on the album with a kind of honesty rarely heard in pop culture.

When writing the record, out March 8, Palmer knew she wanted to discuss those two abortions as well as the one she had as a teenager. Somewhere, she says, there’s a notebook from the writing period that holds a to-do list: “Abortion song. Amanda, you have to. You can’t really quite call this album complete unless you tackle these subjects and include them.”

One particular song, “Voicemail for Jill”, draws from Palmer’s experience of getting her first abortion at 17. In the time since the single was released on Feb. 20, the artist has been avidly reading listener comments. There are some from people who tell her the song helped them heal from their own abortions; others are from those who say that due to the song, they now have a sense of empathy they didn’t have in the past.

On a pragmatic, non-artistic level, that feels like the song’s greatest accomplishment — if it [can] un-silence somebody else.

“Perhaps the most moving comments that I’ve seen have been from women and men who experienced going through the abortion wringer at some point in the past,” says Palmer. “They’ve written to me and commented somewhere and said, ‘I have never told anyone about what happened but I’m going to. I’m gonna tell my mom, I’m gonna tell my children, I’m gonna tell my friends.’ On a pragmatic, non-artistic level, that feels like the song’s greatest accomplishment — if it [can] un-silence somebody else.”

Palmer's hope for the song, she adds, is that it can "alleviate even a modicum of pain for women who have had this thorny experience, quietly tearing up their insides every time this topic is in their landscape." If that can happen — "if it can provide one ounce of antidote in the ocean of shame in which they have to swim on a daily basis" — then it'll have been a success.

Palmer admits that she was not ready to tackle the topic of abortion so head-on when she was just starting out in music, back in her early 20s. Sure, in her Dresden Dolls days, she wrote songs like “Mandy Goes to Med School", which takes on abortion through dark satire. But it wasn’t until Palmer was in Ireland in 2018, when the referendum to legalize abortion passed, that she knew she wanted to write a song that explored the subject more honestly. Yet "Voicemail for Jill" wasn't "written to be a political protest,” she says.

Rather, it was meant to be "something concrete that could hold somebody’s hand when they’re having this experience," she explains. "And right after I wrote it, one of my friends had a partner who was going through an abortion and I was like, right, this song is what I can give.”

There Will Be No Intermission also explores the topics of miscarriage and motherhood, two other experiences Palmer has had in the past seven years. When she was a teenager, she tells me, her CD racks were full of records by male artists like Nick Cave and the Cure. Women were making music too, of course, but Palmer says she doesn’t know how to take their art in at 17: “I didn’t have a fantasy coterie of punk-rock girlfriends stuffing Ani DiFranco bootlegs into my pockets,” she quips. Now, however, at age 42, she is taking in those songs, plus other female-focused media, and it's leaving her emboldened to tell her own story.

A few days before our interview, I saw Palmer perform at a secret New York City show during which she used both black humor and real honesty to tell the audience about her experiences. She reminded them, with no false pretense, that she is a friend who will listen, empathize, and never give up on them. Now, back at home, the musician tells me that she hopes to one day be that same presence for her 3-year-old son and his friends, should they ever need it. Ash is years away from being able to understand that his mother has made an album about the difficult and beautiful truths of the years around his birth; right now he's just a toddler running around the house doing Steve Martin SNL impressions and unsurprisingly singing “Frère Jacques (Are You Sleeping?)” perfectly on pitch. But Palmer hopes to eventually be able to talk to him and instill in him a deep sense of empathy. “I think if you lead with the compassionate truth, you’re never really far off base,” she says.

Any and every time you encounter something to do with abortion, that experience rattles around inside you...

Because for all that Palmer has been through since her last album, 2012's Theatre Is Evil — two abortions, her miscarriage, Ash’s birth, plus the onslaught of online criticism that naturally comes with being an outspoken artist — she holds onto that common thread of compassion. She’s seen the in-fighting that so commonly happens among feminists, especially surrounding topics like abortion, and she views “radical empathy” as the only way forward. With the release of this new album, Palmer hopes to provide just that to listeners who might be in need.

As such, this album, and “Voicemail for Jill,” have one very important purpose. “[Those billboards] are built to hurt,” says Palmer. "They’re built to shame. So, I’ve constructed my billboard. This song is like my personal billboard on the opposite side of the highway.”

More like this
Tristan Thompson Plays Drake’s Best Man In A Music Video Wedding With 23 Brides
By Grace Wehniainen
Zooey Deschanel Can't Be Anyone But Herself
By Samantha Leach
Adele’s All-Female Lineup Includes Kacey Musgraves, Mahalia, & Self Esteem
By Shahed Ezaydi
Hannah Khalique-Brown Has Her Sights Set On 'Strictly'
By Frances Stewart
Get Even More From Bustle — Sign Up For The Newsletter