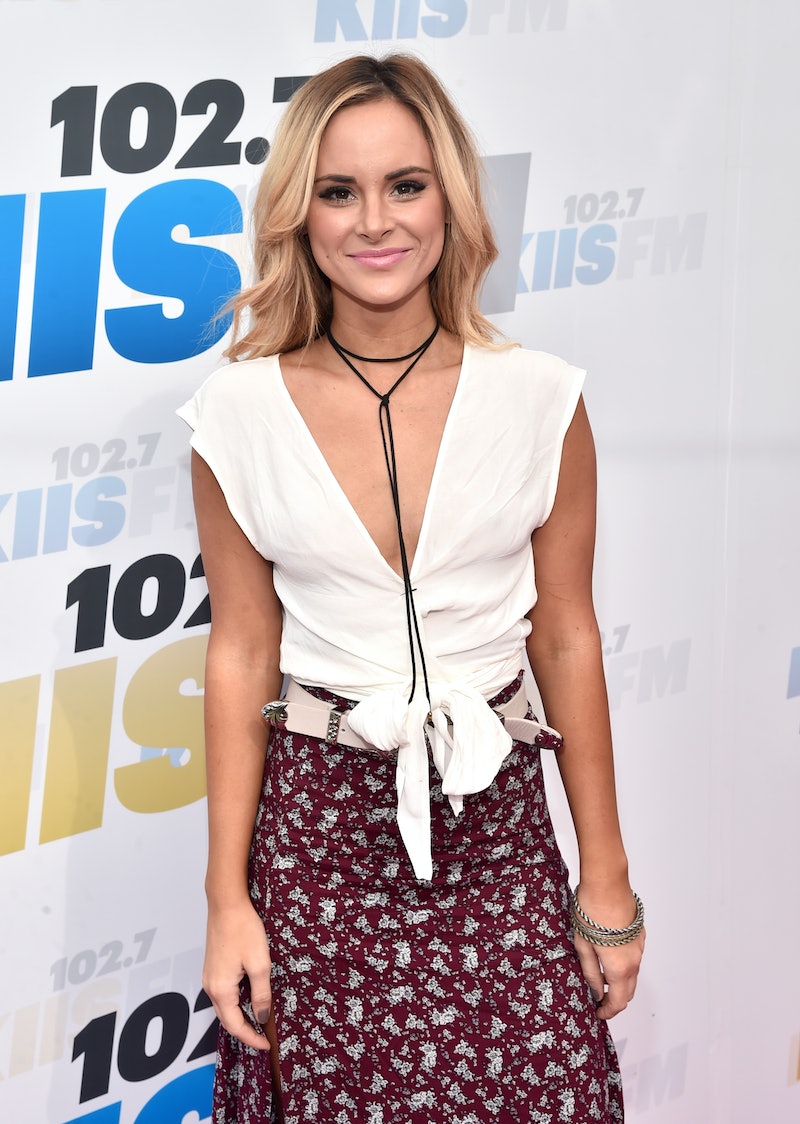 Like a Ferris wheel, the kid-friendly Coachella party theme keeps going round and round. Over the weekend, The Bachelor star Amanda Stanton threw a Kidchella birthday party for her daughters Charlie and Kinsley. The former Bachelor in Paradise contestant shared some photos she took during her daughters' joint birthday celebration on Instagram Stories on Thursday, March 29, and yeah, the whole thing looked really cute. Amanda's children aren't old enough to enjoy the real Coachella (Charlie turned 4 back in January, and Kinsley will turn 6 in April), but Kidchella was literally made for them.

"Had the best day celebrating Kins & Char's combined birthday!" Amanda wrote on Instagram. "My feet hurt from dancing all day on this amazing KidChella stage from @teakandlace. Thank you to everyone that came & made it so special!"

Unlike the real Coachella, there weren’t any EDM tents, Heineken beer gardens, or inescapable dust storms at this particular gathering, but you know what this soirée over Strawberry Farms Golf Club in Irvine did offer? A table where partygoers could get their hair braided, an old VW bus that’d been converted into a photo booth, a flower crown assembly bar, and a bouncy castle. Oh, and cake. Lots and lots of cake.

Ready to see what Amanda's Kidchella was all about? Here are some of her Instagram Stories.

There Was A Stage

The stage at Kidchella Valley Music and Arts Festival also worked as a perfect backdrop for any and all photos.

Did You Accidentally Leave Your Flower Crown At Home?

And if cake wasn't your thing? There were cupcakes. All of the bases were covered.

The Table Setup Is Adorable & All But...

...If this was the real Coachella, there wouldn't be comfortable poufs to post up on. Instead, everyone would have to use their backpacks or sweatshirts or festival maps as makeshift chairs. It's, uh, just something to keep in mind. You know, in case you decide to plan a Kidchella one day.

There Was A Very Unique Photo Booth

It's as the old saying goes: Pics in a bus photo booth or it didn't happen.

There Was A Princess-Themed Bouncy Castle

At first, you may wonder how an inflatable castle that kids can jump on is on theme. Here is a theory for you: This bouncy house may just be the Kidchella version of one of the pieces from Coachella's art exhibition.

And Yes, There Was A Ferris Wheel

The Bachelor in Paradise contestant was not the first reality TV personality to be inspired by annual music festival when planning their offspring's birthday party. Earlier this month, Kyle Richards of The Real Housewives of Beverly Hills celebrated her daughter Portia’s 10th birthday with a Coachella-themed bash at Sky Zone trampoline park. And, of course, when North turned one back in 2014, Kim Kardashian and Kanye West hosted a Kidchella in Kourtney Kardashian’s backyard.

And now, Amanda of Bachelor Nation is a member of the esteemed group of reality stars who have put together a kids' party based on the Coachella Valley Music and Arts Festival. It's a tradition that'll warm your heart before you can say "meet me over by the Gobi tent."