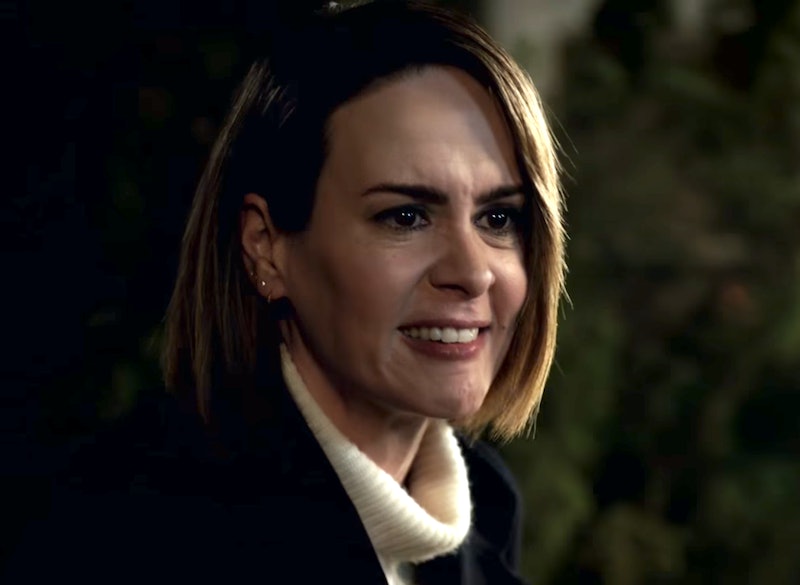 Few television series are as delightfully mercurial as FX's American Horror Story (director: Gwyneth Horder-Payton), and it doesn't sound like the show is ready to give up its crown just yet. According to Entertainment Weekly, series creator Ryan Murphy revealed that American Horror Story Season 8 is set in the future. This marks a major departure for the series, which so far, has found inspiration in the past and present. Might the show add a dash a sci-fi to its horror DNA? Murphy isn't telling, but he does appear to be excited about taking AHS somewhere it's never gone before.

Murphy announced the news at the Television Critics Association press tour on Friday, Jan. 5. As reported by EW, he said,

"All I'll say about it is I want to go to the future — still topical, but the future, which I've never done."

A fan in the audience reportedly asked if this meant outer space, according to EW. However, Murphy clarified that’s not the case. Either way, let the theorizing begin, because "the future" could still mean almost anything. It's possible that the series is wading further into the political realm. After all, Season 7's AHS: Cult stripped away all of the show's supernatural trappings and offered up a truly terrifying dose of political commentary in its place. But it's far more likely that for Season 8 "topical" will mean something entirely different. After all, AHS rarely ever does the same thing twice.

Murphy also revealed that he only recently pitched the idea to FX chief John Landgraf, so there's no news on casting just yet. However, the Feud creator is hopeful that AHS favorite Evan Peters will be back, even though he's currently working on Murphy's latest new show Pose (also for FX). While Sarah Paulson's name wasn't mentioned, it would be shocking if the reigning AHS queen didn't appear in Season 8 — because while the theme may change each year, Paulson's ability to take on any role Murphy throws at her stays the same.

While there's no doubt that Season 8 going boldly forward into the future is exciting, fans of American Horror Story (writer: Crystal Liu) are going to be even more psyched about Season 9. Murphy is reportedly much further along in planning Season 9 than he is Season 8, because, if all goes as planned, Season 9 will be the long-rumored Murder House/Coven crossover. The only reason why it's not up first is because Murphy wants all of his stars back, and there were scheduling conflicts that made it impossible for this season.

According to EW, Murphy said,

"I want all of them. I want Dylan [McDermott], and Connie [Britton] and Jessica [Lange]. They've all said — Kathy Bates, too — everybody who is involved in the show has always said, 'Yeah, that sounds like fun, let's get the band back together again.' So that is one of the reasons why the writing process of that season is taking longer because it's literally 25 people's schedules. But I'm hopeful they will all be back."

If Murphy can truly pull off nabbing all of his heaviest hitters for Season 9, then fans will likely be in for something spectacular. How could a season of television featuring Lange, Bates, Britton, Paulson, Frances Conroy, and Angela Bassett not be must-see TV?

That's Season 9 though; first up is the mysterious Season 8. Even though Murphy nixed the idea that the show would be going to space — that may be a bit too sci-fi for AHS — he must have a compelling reason to set the series in the future. Whether the show is exploring the supernatural theories around the lost colony of Roanoke or delving into the real-life horror of cults, it tends to find inspiration in urban legends and history.

Perhaps, Murphy is ready to try his hand at a dystopian tale, or maybe AHS will see if there's a place for supernatural horror in a world where technology reigns supreme. Whatever lies ahead, AHS fans will almost certainly be tuning in — even if they have to wait until the credits roll on the first episode before they find out what madness they're in for with Season 8.