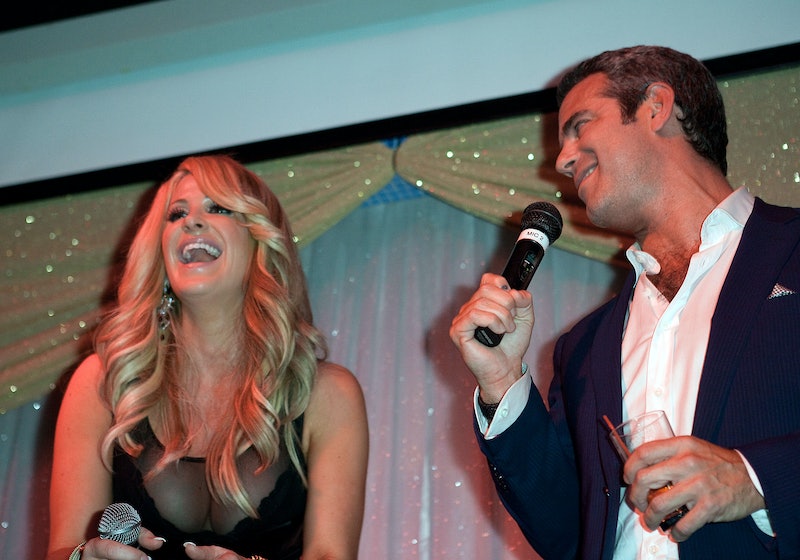 Like so many of us, the star of Don’t Be Tardy wishes she was invited to the instantly iconic Bravo extravaganza that took over The Palm Beverly Hills on Jan. 26. But unlike so many of us, Kim Zolciak-Biermann actually asked Andy Cohen about her nonexistent invite to his baby shower and really get to the bottom things. (Say what you will about being a Bravolebrity, but it sure has its perks!) When the former Real Housewives of Atlanta cast member appeared on Watch What Happens Live with Andy Cohen on Sunday, Feb. 17, she made darn well sure to bring up being excluded from Cohen’s baby shower. And he darn well made sure to set the record straight.

Less than two weeks before Cohen welcomed his first child via surrogate, his Bravo family threw a bash fit for a king. A lot of legendary Real Housewives were present and accounted for at the baby shower, but not every legendary Real Housewife was there. The long and short of it: the reins to the party were not entirely in the guest of honor's hands. "Here is why you weren't invited," Cohen began. "It was all current Housewives were invited, and it was thrown by, like, the five current Housewives."

Kim wasn't the only Real Housewives alum Cohen would've liked to see at his baby shower. The WWHL host explained,

"Then that day [of the baby shower], I was thinking, 'God, man, it would've been so great if Kim was there.' That's why I texted you and I go, 'I just want you to know that I’m thinking of you and I wish you were here.' But it's funny because I heard from Jill Zarin the other day and she was like, 'I would’ve loved to have been at your shower.' And I go, 'You know what, Jill? I would've loved for you to have been at my shower, too.' The problem is that then— Look, I would've loved Caroline Manzo to be there, too. You know?"

Kim said she understood, and then praised Cohen for keeping his relationships with the Real Housewives balanced.

But hey, thank goodness Lisa Rinna was there. I shudder at the thought of a universe where she didn't get up on a table at the baby shower and let it rip.