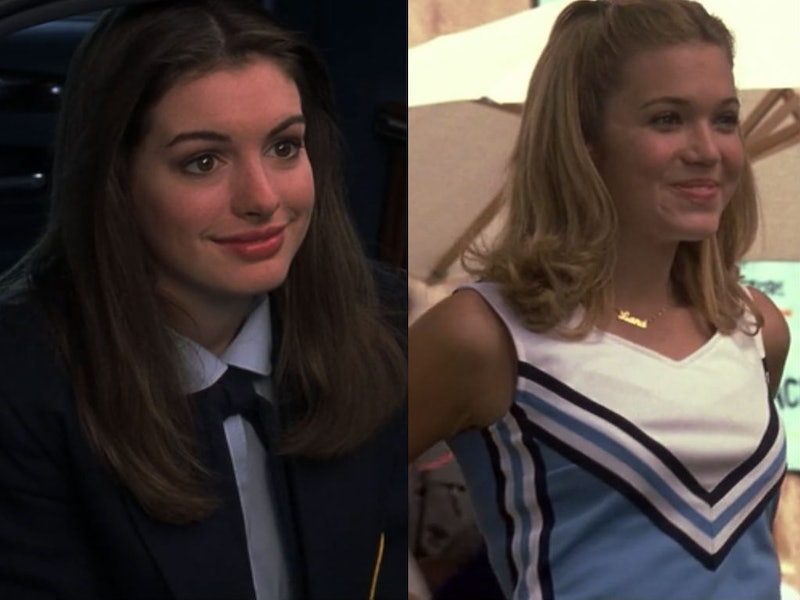 Mia and Lana from The Princess Diaries actually do get along. On Thursday, Mandy Moore and Anne Hathaway had a Princess Diaries exchange on Instagram that will make fans ridiculously happy. Moore shared a throwback photo of herself and Hathaway from the premiere of the 2001 Disney movie that is still a hit to this day. Like her fans, Moore's picture and caption caught Hathway's eye, which led to the best conversation between the two.

Moore found the photo she posted hilarious. She also couldn't believe the outfit she wore to her first movie premiere ever, especially when standing next to Hathaway, an already beloved movie star.

"I guess this film came out just over 17 years ago?? @annehathaway was already a movie star and I showed up to my first premiere in a casual denim suit. Hey, it was 2001! #tbt #theprincessdiaries."

Whether Moore thinks so or not, they both looked great back then, even if the This Is Us star was wearing a "casual denim suit." She totally owned it, just like Hathaway rocked her purple dress.

Like the talent she is, Hathaway responded to Moore in the best way. She replied,

"That's the face I make when I'm trying to not flop sweat on a terrifically famous pop star. So happy for all that you have going on! Let's get together and throw ice cream at each other soon."

First of all, Hathaway is right, Moore was a "terrifically famous pop star" at the time she filmed Princess Diaries. In 1999, Moore released her first single "Candy," which fans couldn't get enough of. Also, don't you love how Hathaway praised Moore's current success? It's no surprise she's so supportive, that's just who the Oscar-winning actor is.

As for the ice cream comment, Princess Diaries fans know Hathaway is referring to the moment in the film when her character, Mia, smashes an ice cream cone on Lana (Moore's character) and her pristine cheerleading uniform.

Even Patrick John Flueger, who played Jeremiah in the movie, appreciated Hathaway's reference. The reason Mia wasted a good ice cream cone was in defense of Jeremiah, who Lana was making fun of at the time. Lana and her fellow cheerleaders also put on their sunglasses to protect their eyes from Jeremiah's bright red hair or "Jeremiah Hair Glare." Flueger wrote,

"@mandymoore It was an honor to be defended by the cone in the first place :) @annehathway #JeremiahHairGlare."

Moore later responded to Hathaway by writing, "Hello friend! Count me in. It'd be an honor to be coned by you again!"

This entire chat is perfection. One thing that would make their exchange even much better is if Moore and Hathaway reunited. A Princess Diaries reunion is what every fan probably wants. Maybe they could finally get together if The Princess Diaries 3 ever happens? Moore said she would return as Lana, but only on one condition.

"Maybe I would make some quick cameo. I would like to see this woman evolve. If I'm going to be involved, I would be down for a cameo — maybe she could make amends with Mia and apologize for being a bully when she was younger. She was insecure, going through a difficult time in her life and [has now] reflected on why that wasn't okay."

This sounds like something Hathaway and women of all ages would also like to see. Let's keep those fingers crossed at least some type of Princess Diaries reunion happens, even if it's just Moore and Hathaway getting together and posting a photo on Instagram.