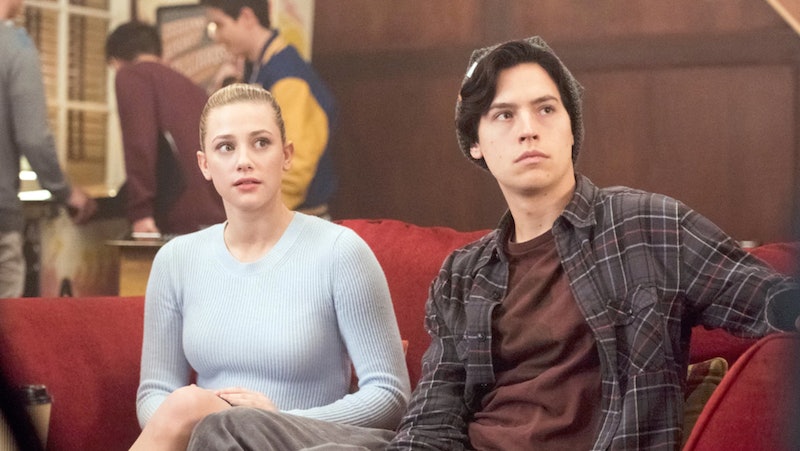 What have we here? Could this be a scoop that is about as delightful a milkshake from Pop’s Chock’lit Shoppe? It just might. On Monday, People reported that Riverdale stars Lili Reinhart and Cole Sprouse may be dating. According to People, the actors who play Betty and Jughead were allegedly seen “canoodling, holding hands, and kissing” at Entertainment Weekly’s Comic-Con party Saturday night. Just as fans speculated earlier this year, Bughead could be a real thing, y'all, but again, it's all unconfirmed. Bustle has reached out to reps for both Sprouse and Reinhart, but has yet to hear back.

The Sprouse and Reinhart rumors were off to the races when the former posted a photo of the latter on Instagram back in March. In the snapshot, Reinhart sits in a field of orange and yellow daisies, a wreath of blossoms resting atop her head. Sure, this could be nothing more than two co-stars hanging out and taking pretty pictures together in a totally platonic way, but what if it wasn't? What if the on-screen couple was a real-life couple, too? Sprouse would go on to downplay the photoshoot, telling MTV News,

"Lili and I play characters who are dating, so just about any time she and I go out into the wilderness, it's Oh my god! But truthfully, I'm a sucker for friends, fashion, and framing."

Fast-forward to 2017 San Diego Comic-Con, and the two were apparently acting like they are more than friends. Once again, neither have confirmed anything, so be respectful, be kind, act accordingly, et cetera.

Again, it's ~unconfirmed~, so protect your shipping heart.

Can't say for certain, but it really might be so wonderful.

If something is actually going on between Reinhart and Sprouse, we may never hear about it. And that's OK. May they live their truths always and forever. ...But dang, if that wouldn't be a ship-tastic IRL pairing.