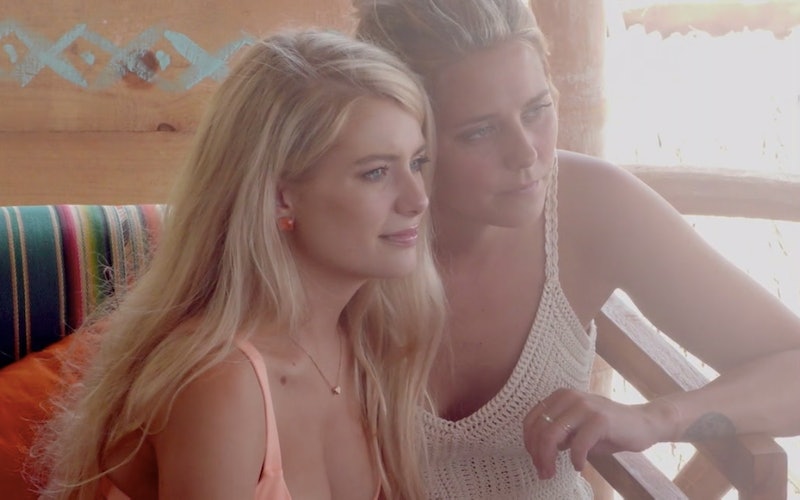 Now that the Bachelor In Paradise is coming to end, couples are being forced to face the music and decide whether they're ready to get engaged before leaving Mexico. And after Tayshia and John Paul Jones's shocking breakup last week, it's anyone's guess who makes it to the finish line — including fan favorites Demi and Kristian, whose future was briefly on the rocks last week. So are Demi and Kristian still together after BiP?

It was both a shocking and romantic turn of events when Demi's pre-show girlfriend, Kristian Haggerty, arrived on the beach so the women could explore their connection, thus forming the first same sex couple on the show. But despite their obvious connection, it hasn't all been smooth sailing for the two women. Demi struggled with the public nature of their relationship and how it was being perceived by her family and friends back home. Obviously, this was triggering for Kristian, who expressed to her girlfriend that it was all-too-familiar territory. Not to mention the fact that earlier in Episode 12, Haley asked Demi whether she was ready to get engaged, to which she responded, "I don't know, man, that terrifies me."

However, Demi was ultimately able to assuage her girlfriend's fears by saying that she was all in. "You're the only person that I've ever felt this strongly about and wanted to be with this badly," she told Kristian. "And I'm scared, so of course I'm running a little bit from it, but I want to be here for you, and I'm excited to keep on growing."

And while all will become clear tonight in the three-hour finale, it seems pretty likely that Demi and Kristian are still together (*cue Bachelor Nation letting out a collective sigh of relief*). Not only have the finale teasers been hinting at these lovebirds getting engaged, but their relationship seems too solid to have crumbled in the months since BiP was filmed.

Neither of them have been too vocal about the other in the weeks approaching the finale, but Kristian's Instagram tribute to Demi should assure fans. "I am so grateful for our story being shared," she wrote. "Learning to be comfortable with who we are is a major part of most of our journeys. Thankful for these vulnerable moments. So proud of you, Dem."

So while it's entirely possible that the two women have parted ways and that they're just incredibly supportive of each other, it seems pretty unlikely. Take this interview with E! News, where Demi hinted at the emotions they had going into tonight's finale. "We were freaking out, too," the interior designer shared. "It's just very emotional.... You feel love, you feel scared, you feel vulnerable, but I think that it's good to sort through those feelings and talk them out and get to where you need to be with the person that you want to be with."

Then there's this Sept. 16 Instagram post from Kristian's sister, Kelly, who wrote, in part, "I'm SO incredibly PROUD of my baby sister.Kristian & Demi went on National Television & spoke their truth.They decided to use the platform given to them in the most BEAUTIFUL way two human souls could.So Brave,So Honest & True,Their LOVE for each other shows so many that it’s ok to be YOU [sic]!"

So even if the two women have gone their separate ways, it's comforting to know that they've still made Bachelor Nation history — not to mention that they seem to be supporting each other, whether they're together or not.