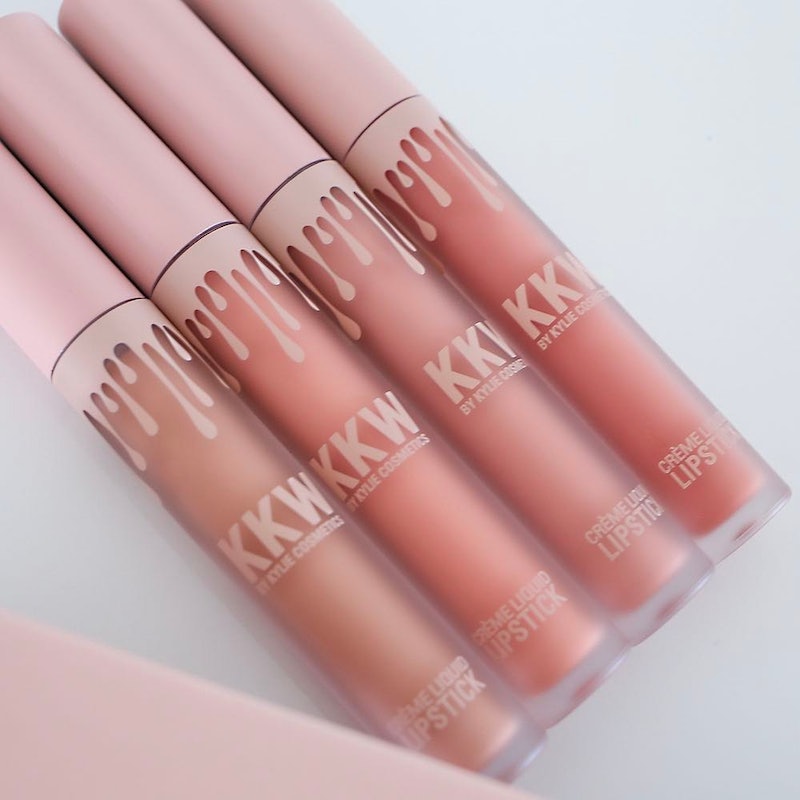 The Kardashian-Jenner family may be most well-known for their hit reality television show, but almost all of the women have branched out into their own ventures. Now, two of them may be coming together (again). A KKW x Kylie Cosmetics collaboration may be coming around for the second time based on a tease Jenner gave on her Instagram. To see the owners of two major brands like KKW Beauty and Kylie Cosmetics come together can only be a sign that this new collab is going to be a banger.

With all the new developments in the sisters' lives, you may have forgotten that they've collaborated in the past. In fact, it was back before KKW Beauty had even launched. The pair created four creme liquid lipsticks in some seriously gorgeous nude shades. Each of the liquid lips was named after Kardashian herself because she is the queen of nudes. The collection came in a four-pack bundle, and when KKW Beauty launched, the lippie collection moved over to her website for sale. They're actually still available via KKW Beauty today.

Since then, KKW Beauty has launched with complexion, lip, and eye products, and Kylie Cosmetics has continued to expand their selections and added a new collaboration with her sister Kourtney Kardashian. Now, though, it seems like KKW and Kylie Cosmetics could be getting back together, and if so, it's a beautiful day to be a Kar-Jenner fan.

On Tuesday, Jenner posted a throwback image of she and Kardashian on set when they filmed for their original collaboration. While that could seem fairly innocuous, it was her caption that led to speculation. In it, Jenner wrote, "Who wants KKW X KYLIE round 2?"

Sure, Jenner could just be musing about what she wants to do with Kylie Cosmetics next, but all of the ladies have extremely strong social media skills (Kardashian did break the internet after all) and are pretty business savvy (Kylie Cosmetics is worth $420 million), it seems unlikely that Jenner would post this without knowing all of the speculation would go along with it.

As for what would be included in a second collaboration, there's no way to know. Both Jenner and Kardashian have heavily expanded their makeup ranges. KKW Beauty and Kylie Cosmetics are home to a number of the same types of products including lipsticks, highlighters, and concealers. However, both do seem to share an affinity for lipsticks, and it is, after all, what they created last go around.

On top of their product similarities, another collaboration would make total sense for both brands who have had major success with them in the past. Kardashian's palette and lipsticks with her long time makeup artist Mario Dedivanovic have had to be restocked on her website multiple times and marked the first time her brand ever launched an eye shadow palette.

As for Jenner, collabs are kind of her thing. Not only has she worked with Kardashian in the past, but she's crafted products with nearly every single member of her family. From Khloe to Kourtney and even to mom Kris Jenner, she knows how to make a collaboration count.

Now, with both sisters owning extremely successful makeup brands, why not unite their beauty-loving fans under one KKW Beauty x Kylie Cosmetics banner?

Only time will tell if another KKW Beauty x Kylie Cosmetics collaboration is coming. With both women busy at work on their own brands, finding time to craft something together could be difficult. On the other hand, they both use one another's products (like Jenner did in her Vogue video), so why not test out new goods together. Right now, though, fans can only keep their fingers crossed and pray to the makeup gods that there's more to come.