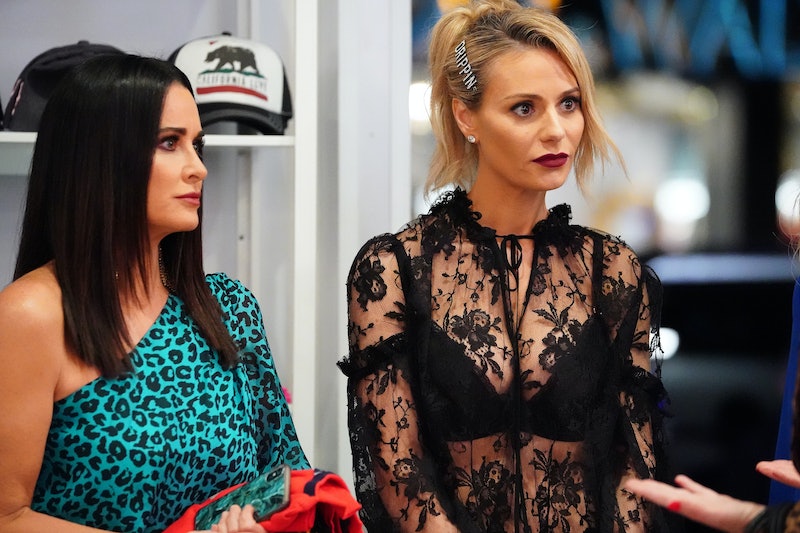 Dorit Kemsley kicked off one of the first awkward cast dinner parties of RHOBH Season 10 by telling Kyle Richards how much she missed her while she was away filming Halloween Kills. After partaking in a few too many post-dinner Fireball shots, the giggling women were the last wives standing, and it seemed the picture of a close sisterhood. As previews for the May 6 episode showed, however, Kyle and Dorit's friendship on RHOBH wouldn't exactly be smoothly sailing to the tunes of Sutton's "yacht rock" for much longer.

Despite Kyle enlisting Dorit's help with her Kyle + Shahida show at New York Fashion Week in the season premiere, the Beverly Beach creative director threw some shade at her pal in a confessional interview, suggesting she'd just put her name on someone else's designs and didn't really know what she was doing. Kyle's fashion show took place in Sept. 2019, and by the time the episode aired in April, she had some thoughts.

"I didn't just 'put my name' on the clothing line like Dorit suggested," Kyle tweeted on April 15 after watching the episode. "I worked closely with Shahida on the looks WE wanted. For a [long] time. THAT is why I pulled out the pieces that I knew nothing about and were NOT our collaboration." In a separate tweet the same day, Kyle added: "I love you @doritkemsley1 but you didn't save my show. We paid a lot of money for a production team for that #rhobh"

Dorit seemed to take the high road, however, replying to Kyle's tweet: "The show was amazing, the line fabulous and the team top-notch!"

Following the Season 10 premiere, Dorit appeared on Watch What Happens Live with Andy Cohen: @ Home, explaining she liked Kyle's designs, and, despite being "in over her head," she was confident she'd "figure it out." During the same WWHL episode, Dorit also addressed an upcoming scene from the RHOBH trailer in which Kyle "flipped out on her" saying she never stops talking.

"Kyle and I have a little back-and-forth," Dorit teased to Cohen. "She thinks I talk too much; I think she never lets me finish a thought — ever. Doesn't let me finish a sentence."

When Kyle made her own remote WWHL appearance on April 29, she admitted she was "really mad" about Dorit's fashion show comments and threw some shade of her own. "Her fashion show was in a warehouse here in L.A.," Kyle noted. "Mine was at New York Fashion Week," All in all, however, the women seem to still be on good terms now, despite their minor squabbles, and still show their support on each other's social media posts.

Kyle and Dorit have come a long way since their spat at a Boy George concert in Season 9. Kyle admitted to the Culture Club singer that she would feel "vulnerable" if she performed on stage in front of thousands of people in the audience like he just did. For some reason, Dorit's husband PK Kemsley took it upon himself to respond to that remark with "You'd have issues. You can't even get along with your best friend." PK's so-called "British humor" put Dorit in the awkward position of defending her husband while also supporting her friend.

As was the case then, the women still seem to be able to take the ups and downs of friendship in stride and keep moving forward.