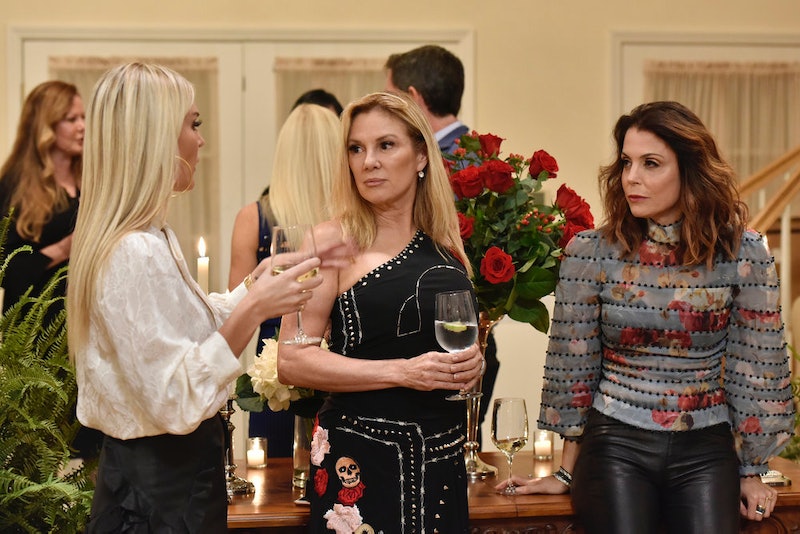 Any faithful Real Housewives Of New York viewer or tabloid reader knows about the tough year Luann has had. She fell in love with Tom D’Agostino, and they got engaged and married and less than a year. They also got divorced in less than a year, mostly because Luann didn’t feel respected in her relationship — there was evidence shown on the show that Tom had cheated on her, and it all just ended up being too much for Luann. It’s understandable. But following that, there was an incident in Palm Beach: Luann was arrested for, according to E!, allegedly drunkenly barging into somebody else’s hotel room and battery on a police officer, among other things. She went to rehab, and she recently accepted a plea deal, according to E!. (Sentencing will happen in June.)

At the time of her arrest, Luann told E! in a statement, "This was my first time in Palm Beach since my wedding, and being here brought up long-buried emotions. I want to offer my sincere apologies to anyone I might have offended with my behavior. I am committed to transformative and hopeful 2018."

So suffice it to say that Luann has had a heck of a time over the past 12 months. All of the other women from Real Housewives Of New York have rallied around her. Following Tom and Luann’s divorce, Sonja, who was friends with Tom, dropped him. He invited her to a party on the very boat he and Luann celebrated their nuptials on, and Sonja ignored it. Ramona, on the other hand, didn’t get invited — instead, she begged Tom for an invitation. Sonja’s reaction to the man that did her friend dirty? Correct. Ramona’s? Wrong, wrong, wrong.

Ramona defended herself in Wednesday's episode by saying that it was all Luann’s fault anyway, because Luann started dating Tom after Ramona dated him, and also, Ramona wasn’t invited to the wedding or something. I don’t know — I tend to black out when Ramona speaks for too long. It’s a defense mechanism to protect the brain. Most of the women agreed that it wasn’t cool for Ramona to do that. There were varying degrees of disagreement, but all in all, the opinion was that Ramona was not a great gal pal to Luann in this situation.

So are they still friends? Well, it’s hard to tell. After Luann’s rehab time, Ramona told Us Weekly, “We can all have our ups and downs, we all have our little fights and skirmishes, our little tit-for-tat, but when anything really bad happens to one of us, we all rally around and we definitely all rallied around Luann.” Interesting. She went on to say that Luann was very happy in her new lifestyle. “She’s doing yoga, she’s going to AA every day, and she’s lost weight, and she looks fabulous,” Ramona said. “I think she’s really genuinely happy, feeling really good about herself.”

If Ramona knows enough to know that Luann feels good, they’ve probably seen each other, but it’s hard to tell if she and Luann are besties or not. Looking on Instagram isn’t helpful — both women only post selfies of themselves, which makes sense. To be a Housewife, one must have a certain heightened sense of self-worth to survive. Ramona and Luann are contractually obligated to hang out, but if Ramona continues not to respect their friendship, Luann is probably going to drop her. Post rehab, Luann has a new lifestyle, and she doesn’t have time for people who don’t support her.