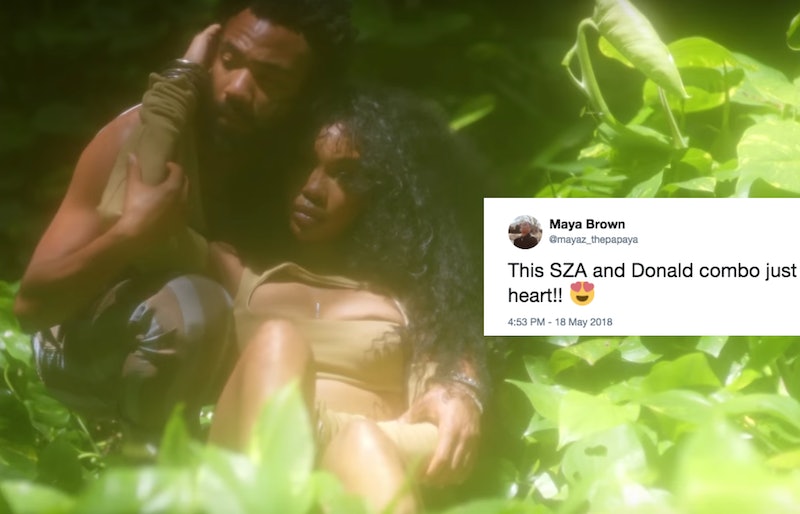 After SZA made a cameo in Donald Glover's lauded "This Is America," the pair appeared in a video together again. As a result, fans online are shipping SZA and Glover hard. The actor and musician — who performs as Childish Gambino — co-stars as the R&B crooner's love interest in her new video for "Garden (Say It Like Dat)," which dropped Friday. It makes sense if you're wondering whether SZA and Glover are friends in real life.

In the new video — which was directed by Karena Evans, who previously worked with Drake on his videos for "God's Plan" and "Nice For What" — SZA wakes up in a cave by beach, before wandering into a lush forest where she meets Glover. The two then cuddle in the greenery beneath soft sunlight as SZA sings, "You'll never love me but, I believe you when you say it like that."

In other scenes, the artist wades through a creek and dances atop some rocks high on a mountainside. As Paper reported, SZA's mother, Audrey Rowe, also makes an appearance, sitting on a throne surrounded by flowers, where toward the end of the clip SZA eventually joins her.

After seeing SZA and Glover together a second time, fans began speculating about the nature of their relationship and started shipping the pair on Twitter.

As one fan @laurenpaigeem tweeted, "Yo, so are SZA & Donald Glover together? Because that’s a power couple," while @Lalaaaa said, "SZA AND DONALD GLOVER ARE THE COUPLE GOALS I DIDNT KNOW I NEEDED IN MY LIFE."

Meanwhile, @_FrannyPack_ tweeted, "I low key (high key) wish Donald Glover and SZA were a couple. They look so magical in her Garden video," while @k_sesh wrote, "omg are sza and Donald Glover a thing ?!!? Bc [skull emoji]. Over. Everything is over all relationships are cancelled," along with a series of heart-eye emojis.

While the "This Is America" and "Garden" music videos mark their first professional collaborations, SZA — whose debut album, Ctrl earned her five Grammy nominations — has been pals with Glover for a while. In a The FADER cover story published in February, SZA told the magazine that Glover pumped her up when she found herself doubting whether hit single "Love Galore" was really any good — even after it went platinum. "I think when 'Love Galore' went platinum, Donald [Glover] texted me like, 'Do you still think it sucks?' And I was like, 'I dunno,'" she told the magazine.

SZA also documented her night at the 2018 Met Gala, taking polaroids of other guests throughout the evening, including one of Glover, according to Dazed.

Glover has had his fair share of success recently as well. "This Is America" debuted in the top spot of the Hot 100, according Billboard, and the video, rife with metaphoric imagery, has sparked a national dialogue about gun violence in the country.

Fellow artists like Erykah Badu and Jaden Smith praised the video online, which Glover made alongside longtime collaborator and Atlanta director Hiro Murai, according to Dazed. The clip was was filled with hidden meaning, and Guthrie Ramsey, a music history professor at the University of Pennsylvania, credited the singer with a unique artistic feat. He told TIME, “You’re not supposed to feel as if this is the standard fare opulence of the music industry. It’s about a counter-narrative and it really leaves you with chills.”

There's no confirmation at the moment as to whether SZA and Glover will collaborate in any other capacity, but if their last two videos are any indication, it's likely the two will work together again. As for any romance between the artists, there is no concrete evidence of that either, so for now, fans shipping the pair will have to settle for their onscreen love story.

More like this
Who Is Camila Cabello Dating? She's Getting Cozy With Lox Club CEO Austin Kevitch
By Radhika Menon
Who Is Bad Bunny Dating? Gabriela Berlingeri's Vocals Are Featured On His Song "En Casita"
By Radhika Menon
Demi Lovato's New Song "29" Hints At Their Age Gap From Ex-Boyfriend Wilmer Valderrama
By Jake Viswanath
Beyoncé & Jay-Z's Relationship Timeline Proves They're Still "Crazy In Love"
By Jake Viswanath
Get Even More From Bustle — Sign Up For The Newsletter