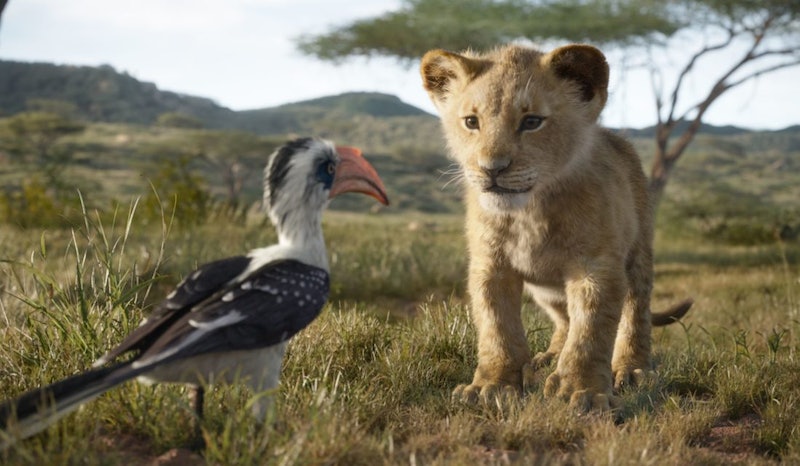 Disney's live-action remakes have been a wildly successful endeavor for the studio over the past few years. Films like Beauty and the Beast and Aladdin have put a new spin on classic films by replacing the animation with real actors, but does the latest remake, out July 19, follow the same formula? Are the animals in The Lion King real? They certainly look real, but they talk and sing and move in all sorts of ways that real animals would not do. So what's the deal? Was CGI used to augment actual animals, or was every animal in the film completely created by computer? And if that's the case, then does the film still qualify as "live-action?"

Unlike every other one of Disney's live-action remakes so far, The Lion King contains zero actual human beings. Even The Jungle Book, which featured a cast of CGI animals and a mostly CGI setting, still had Mowgli portrayed by real-life person Neel Sethi. But The Lion King foregoes humans entirely for an all-animal cast, just like the animated original. And just like the animated original, the new Lion King does not feature any actual animals. At all. Every animal you see on screen is a fully-CGI character. As for the film's African setting? That's CGI, too. And while all that is undeniably impressive, it also begs the question: How is this live-action?

Because that's what Disney wants you to call it, OK? By most standards of measure, the new Lion King is an animated feature. It was created by artists, and it was done so the old-fashioned way in the sense that no motion-capture was used for the characters, according to Vanity Fair. Instead, the actors simply provided the voices for their characters like they would in a traditional animated film. But in spite of the film's animated movie bona fides, Disney isn't classifying it as such. The studio produced it through Walt Disney Pictures rather than Disney animation; they are not expected to promote it for Best Animated film at the Oscars, according to Indie Wire; and they are considering it part of their series of live-action remakes. And as it turns out, there is one technicality that allows them to do that without being completely untruthful.

Director Jon Favreau has stated that he doesn't think it's fair to call The Lion King animated because the animation is so realistic that audiences might think it was real if they didn't know otherwise. "There’s no real animals and there’s no real cameras and there’s not even any performance that’s being captured that’s underlying data that’s real. Everything is coming through the hands of artists," Favreau told Slash Film. "But to say it’s animated I think is misleading as far as what the expectations might be." Favreau is so confident in the film's realism that he has included exactly one live-action shot in the movie, just to see if anyone notices, according to IndieWire. So technically, the move is part live-action — for a few seconds, anyway.

There are no real animals in The Lion King, but the film's effects are so lifelike you'll swear there are. The movie represents a stunning new leap in animation when it comes to replicating animals on screen, and it could signal a future where no actual animals are ever used in film production. Call it the circle of life.