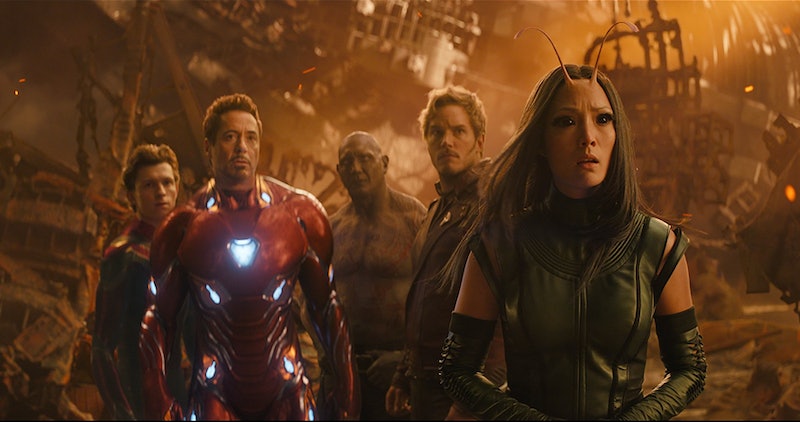 aThe ending of Avengers: Infinity War was shocking, to say the least. After collecting all six Infinity Stones and snapping his fingers, Thanos wiped out half the life in the universe. Among those who dissolved into nothingness were major heroes like Spider-Man, Doctor Strange, Black Panther, and the bulk of the Guardians of the Galaxy. But many fans are theorizing that the heroes who disappeared aren't really dead, but rather were transported to the Soul Stone. But are the Avengers in the Soul Stone, or are they actually dead for good?

They're most definitely in there. In the comics, the Soul Stone contains its own pocket dimension known as Soul World, which is capable of holding the souls of those captured by the Soul Stone; it's the main power associated with that stone. In fact, fans were already given a glimpse of Soul World in Infinity War, according to the film's directors, Joe and Anthony Russo. "At the end there, Thanos is in the Soul World, that’s where he is. It’s orange. She’s [Gamora] there. But the Soul Stone has the ability to represent the spiritual aspect of everyone," Joe tells Bustle, speaking on May 4 at New York's Four Seasons hotel.

Characters like Thanos being in the Soul World would make a lot of sense, as it's unlikely that many of the people who were killed off at the end of Infinity War are actually really dead. After all, Black Panther recently became the highest-grossing solo superhero movie ever made, and Marvel Studios head Kevin Feige has already said a sequel will be produced whenever director Ryan Coogler wants to make it. Sequels for the Guardians of the Galaxy and Spider-Man franchises, meanwhile, have also already been confirmed, with the sequel to Spider-Man: Homecoming even securing a release date of July 5, 2019. With all of these characters obviously due to return, the consensus among fans is that their deaths will be undone in Avengers 4 — because they're not really dead, just in the Soul Stone.

A main theory suggests that the heroes, along with everyone else who disintegrated, have been transferred to the inside of the Soul Stone, and whoever manages to get the Infinity Gauntlet from Thanos should be able to free them. But the Russos stress that the story may not unfold the way people expect. In other words, bringing the deceased heroes back to life may not be something as simple as releasing souls from Soul World. There may be alternate timelines or dimensions where the future of the MCU takes place, meaning the deaths experienced in the reality of the MCU we've come to know through 19 films really are permanent.

"Keep in mind for [Avengers 4], keep in mind for Guardians — anything [fans] think is coming. As unexpected as this turn of events was, there are many other unexpected turn of events," Anthony explains. "These stories can go in any direction. People become accustomed to the MCU moving in a linear timeline. There are different directions to go other than that. There are many possibilities and what I think we find exciting about the future for the MCU is that everything is open now to possibilities. That’s the one thing we always used to say, with Marvel everything is possible, which is the amazing thing. So I think there are inventive ways to find new stories that are hard to guess at."

So although the Soul World is confirmed to exist, that doesn't necessarily mean that's where all those heroes who disappeared ended up. They may really be gone in this timeline, in this reality, and the future of the MCU may take place in either an alternate dimension or in a reset timeline. It's a wild idea to wrap one's head around, and it certainly would be uncharted territory for a blockbuster franchise of this magnitude, but as Anthony Russo says, with Marvel everything is possible.