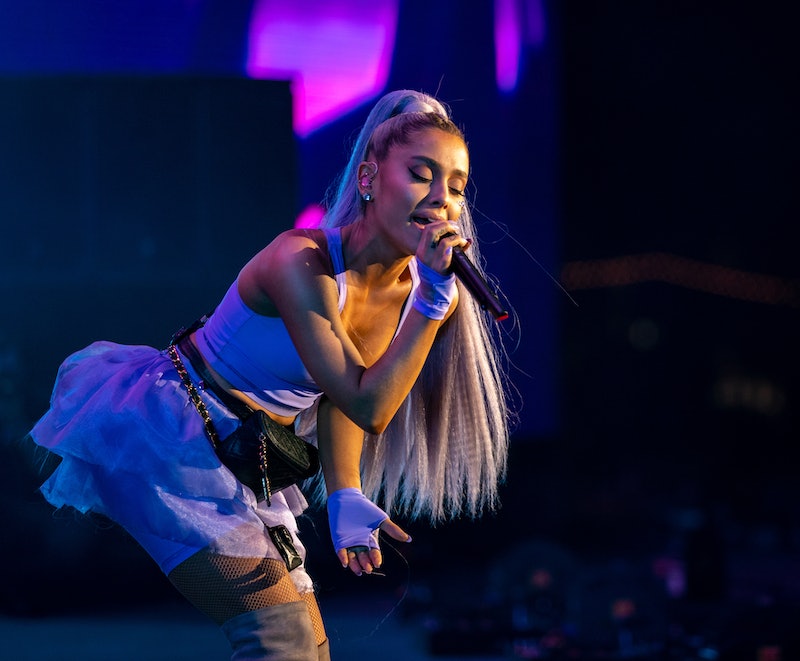 Thank u, trademark. As TMZ reported on Tuesday, April 9, Ariana Grande has taken a crucial, thigh-high boot-clad step toward trademarking “Ariana Grande Thank U, Next.” On April 2, the “Break Up With Your Girlfriend, I’m Bored” singer filed a trademark application for the phrase, which is, of course, a reference to her hit song “Thank U, Next” and her album Thank U, Next. The application indicates that Grande wants to use the phrase for bath and beauty items like perfumes, lotions, bath and shower gels, body scrubs, body powders, body soufflés, and body mists. The legacy of "Thank U, Next" may soon head to a bathroom cabinet near you.

The song "Thank U, Next" has only been around for five months (wow, hard to believe that, eh?), but it has already reached icon status. The single has generated approximately one billion memes, was paired with a very 2000-and-great music video that generated approximately one billion more memes, is the title track off of Grande's tremendous fifth album, and is Grande's first single to hit number one on the Billboard Hot 100 (hard to believe that one, too, no?). And now, it looks like the song's title is about to be trademarked for a line of bath and body products. Not bad for a song that was more or less introduced to us via a series of subtweets. Not bad at all.

This would not be Grande’s first time throwing her hat (or should we say her hair tie?) into the beauty product market ring. Thanks to the fragrances Cloud, Ari, Frankie, Moonlight, and Sweet Like Candy, the Grammy winner already has her very own perfume empire, and in 2016, she teamed up with MAC Cosmetics on a lipstick and a lip gloss.

Whew, what a time to be a Grande fan. The Nickelodeon sitcom star-turned-ponytailed powerhouse pop icon released not one, but two truly fantastic albums in the span of six months, is currently in the middle of a huge world tour, has an ever-expanding line of awesome merch, and has dropped several great music videos into our hot little hands. Oh, and let us not forget that she is dominating the charts left and right. As if she did not already have enough on her plate, she now appears to be setting the wheels in motion for her very own bath and body line. Ugh, I can't wait. Thank u in advance, "Thank U, Next" bath and body.

More like this
What Is Ariana Grande's Net Worth? When It Comes To Money, She Has No “Problem”
By Hugh McIntyre
Adele Says Postponing Her Las Vegas Residency Was “Brutal”
By Alyssa Lapid
Lizzo Proved She’s Team Jeremiah During Her ‘The Summer I Turned Pretty’ Review
By Grace Wehniainen
Drake’s Surprise Performance With The Backstreet Boys Was Fans’ Fire
By Stephanie Topacio Long
Get Even More From Bustle — Sign Up For The Newsletter