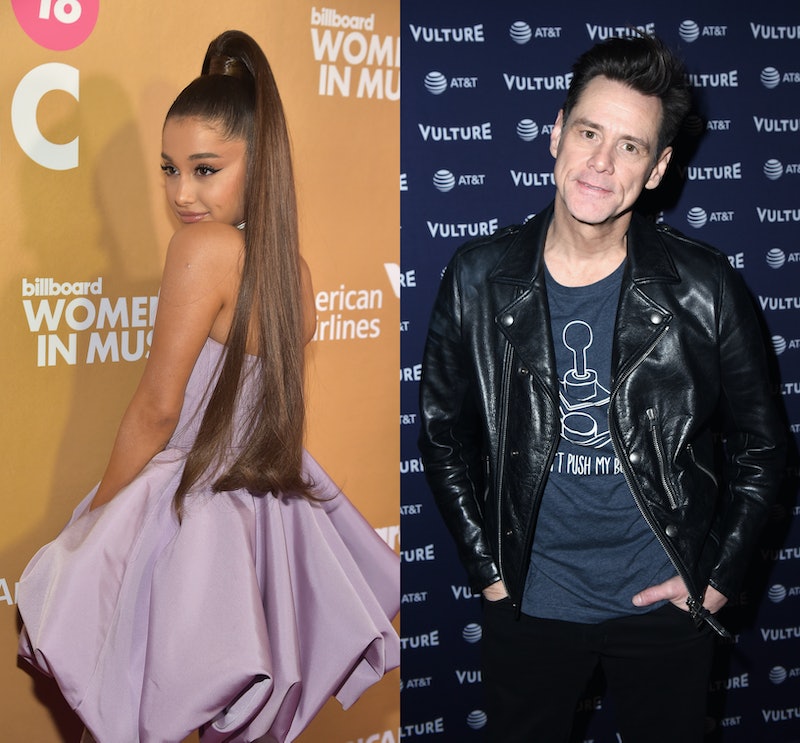 Sometimes, meeting your heroes can be a good thing after all. Jim Carrey and Ariana Grande's Twitter exchange about depression and self-care is an affecting back-and-forth between two celebrities who have been open about their mental health in the past. Oh, and there's also a nod to AOL Instant Messenger in there, too.

On Saturday, April 20, Grande posted a photo of Carrey and attributed a quote about mental health to The Truman Show actor. "Depression is your body saying, 'I don't want to be this character anymore. I don't want to hold up this avatar that you've created in the world. It's too much for me,'" the quote began. "You should think of the word 'depressed' as 'deep rest.' Your body needs to be depressed. It needs deep rest from the character that you've been trying to play."

The following day, Carrey tweeted, "@ArianaGrande I read your lovely mention of me and things I've said about depression. A brilliant teacher and friend, Jeff Foster was OG on the 'Deep Rest' concept. I admire your openness. I wish you freedom and peace. I feel blessed to have such a gifted admirer. Happy Easter!”

Grande quote-tweeted Carrey's post, writing, "i can't process this or breathe hold on." A few minutes later, she added, "thank u so much for your kindness. i don’t think u understand how much i adore u or what u mean to me. thank u for taking the time to share this w me. you are such an inspiration. i can't wait to tattoo this tweet to my forehead. sending you lots of love & all things happy.” And then, she wrote, "jimcarreyfan42 is a very grateful girl right now,” making reference to her very first AIM screen name.

Grande has been a fan of Carrey's for a long time. The two first met at the White House Easter Egg Roll in 2014, and Grande promptly started crying the second her idol introduced himself to her (and yes, this moment was caught on tape). Later that same year, they shared the stage at the MTV VMAs when Grande won Best Pop Video for "Problem" featuring Iggy Azalea — The Mask actor was one of the presenters.

Grande has been open about her mental health and the ways she's processing the trauma she has endured over the last few years. In 2017, a bombing at her concert at Manchester Arena left 22 people dead. Then her ex-boyfriend Mac Miller died on Sept. 7, 2018. Afterwards, her incredibly public relationship with Pete Davidson ended a few months after they announced their engagement. As Diddy said during her Coachella set last Sunday, "She's been through a lot, and she's still standing."

Just last week, Grande told a fan on Twitter that she doesn't believe touring has been healthy. Per Cosmopolitan, she said in a now-deleted tweet,

"I don't think it is. It's been v hard. I have sm on my mind and it's so heavy and no energy to process or work thru any of it but I'm trying hard. And I have the twins. And seeing you all is so nice. But it's hard emotionally. I wish it were a year ago. I'd give anything."

Per Entertainment Tonight, she wrote in another now-deleted post that "Making [the music] is healing. Performing it is like reliving it all over again and it is hell." While Grande is clearly processing a lot right now, her tweet exchange with Carrey is a reminder that there's power in reaching out and sharing your experiences with the world.