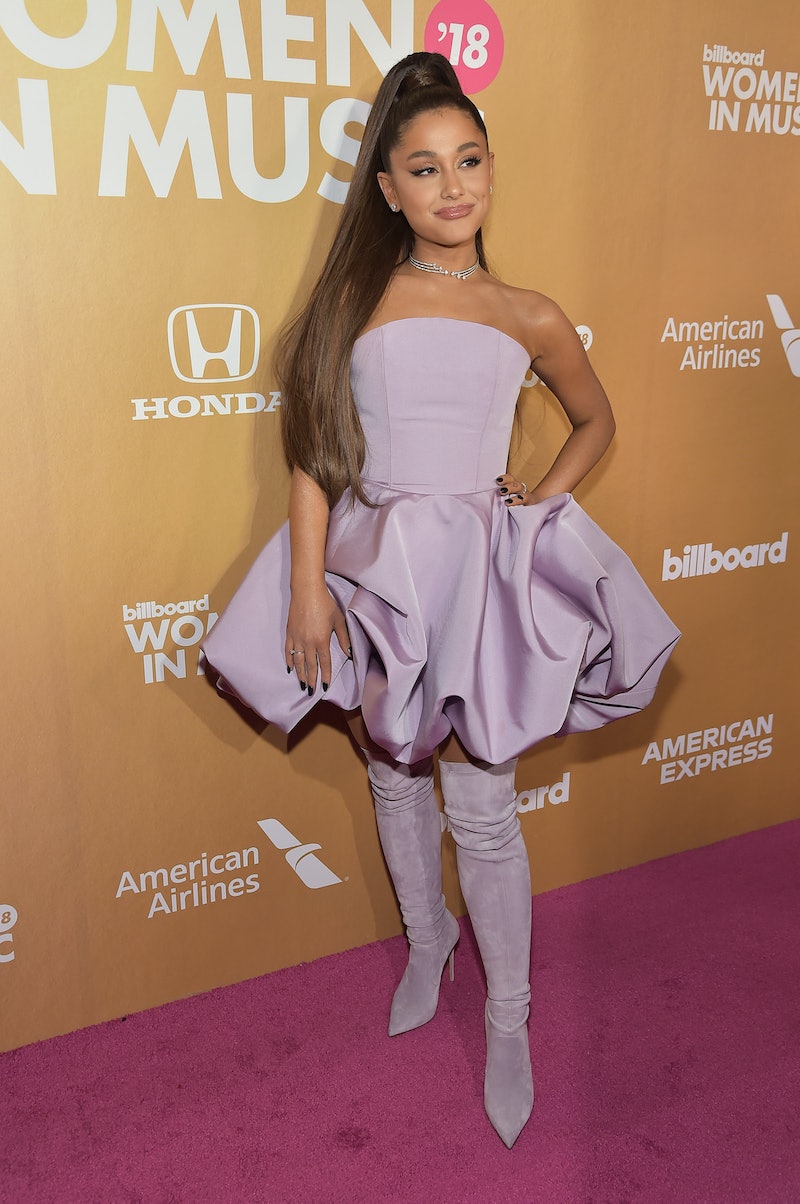 It's no secret that Ariana Grande loves Christmas — after all, this is a singer who has released two separate holiday albums — so it's no surprise that she would wish it was Christmas today. And in order to help everyone else feel the holiday spirit, Grande and Jimmy Fallon recreated an iconic Saturday Night Live sketch on a recent episode of The Tonight Show, specifically for the Christmas season.

On Tuesday, Grande joined Fallon and his former SNL cast members Horatio Sanz, Chris Kattan and Tracy Morgan, for an updated version of their famous holiday song, "I Wish It Was Christmas Today." Wearing an oversized holiday sweater that featured white embroidered snowflakes and her signature over-the-knee boots, Grande held onto Kattan's shoulders and danced between him and Morgan, who accompanied the group on maracas. Fallon, meanwhile, played the keyboard (which Kattan held up for him throughout the number) and backed up Sanz on vocals.

And while it might seem odd to have one of the biggest pop stars in the world neither sing nor dance during a musical performance, Grande's stone-faced bopping was a perfect fit for the group's infamously off-key holiday number. Fallon, Sanz, Kattan and Morgan first performed "I Wish It Was Christmas Today" back in 2000, and the foursome's adorable inability to sing on key or play on beat made the song an instant classic.

Though they've revived the tune many times over the years — performing it for Easter one year, and even dressing up in elaborate toy costumes in order to celebrate the season of giving — the group's stiff dance moves and dorky costumes have endured. (Grande is the first person to join the four comedians for a performance of their Christmas number, presumably because both her comedic chops and her love of the holiday are so strong.)

In addition to being "in a new band," as she joked on Instagram, Grande also performed her new single, "Imagine," for the very first time on Tuesday night's show. She shared a clip of herself singing on social media, which she captioned with a sweet message about how much music has helped her through her very difficult year. "I jus wanna sing that’s all," Grande wrote on Instagram. "@theroots @fallontonight it’s an honor every time thank u."

The singer has been incredibly open recently about the impact that the events of the past few years — which included the May 22, 2017 bombing at her Manchester concert, the sudden death of her longtime friend and ex, Mac Miller, and her whirlwind romance and breakup with Pete Davidson — has had on her upcoming album, which, according to Billboard, Grande wrote in just one week.

In her December cover story, Grande told the outlet that "This [album’s] not particularly uplifting," adding that while, "a lot of it sounds really upbeat, it’s actually a super sad chapter."

And while Grande hasn't been able to assure fans of when, exactly, they can expect her new album — though she did note on Twitter that "it's looking like I won't be able to" release it until the new year — she has shared a lot about the album's influences and inspiration on social media. In addition to admitting to one fan that the album is "terrifyingly" personal, "like I want to take things off. but my friends tell me not to," Grande has also shared that it's her most "honest" work yet.

"Thank u for encouraging my honesty & inspiring me to be a braver writer. 🌱 i feel so dreamy and grateful rn," Grande wrote in early December in a tweet to songwriter Savan Kotecha, who himself praised the album as "an example of a once in a generation talent at the peak of her powers both as a vocalist and a writer."

Just before releasing "Imagine," Grande also noted that her new songs will have a balance between being "super self assured / commanding" and feeling "vulnerable / unsure." She explained, "i wanted to mix up the energy a lil bit as both of those themes are equally prevalent on the album / in my life rn."

Regardless of how unsure she feels at the moment, it's clear that getting to celebrate Christmas with Fallon and some legendary comedians was a great way for Grande to kick off the holiday season — and it was the perfect gift for all of her fans, as well.