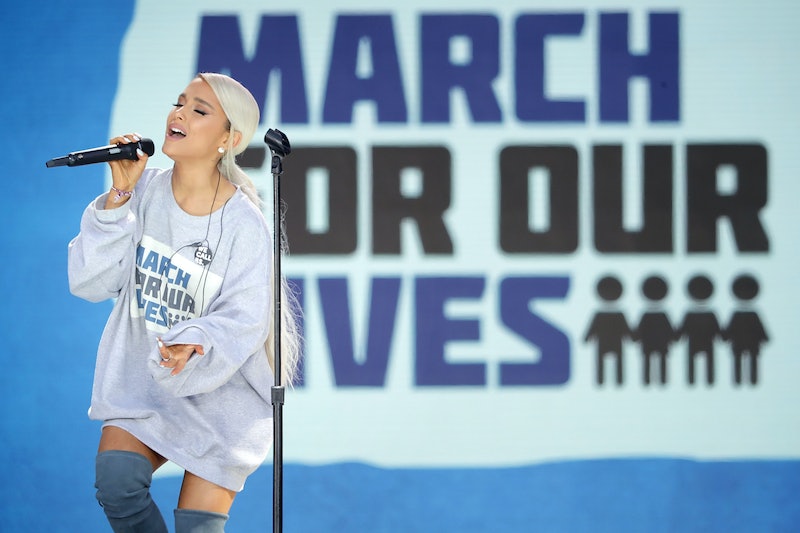 Ariana Grande's signature look is her ponytail. That's not exactly news to anyone. However, she's also got a few staple fashion pieces as well, and she's taking a jab at it herself because of them. Ariana Grande trolled her hoodies and no pants look in the perfect video posted to her Instagram.

When it comes to discussing Grande's style, her ever-present pony always comes up, and even when she wears her hair down or curly, her locks almost always seem to be the main story. However, the "Don't Call Me Angel" singer has an equally iconic look in her decision to wear boots, hoodies, and well, no pants — at least no pants that can be seen.

Apparently, the internet has taken notice of her sartorial choices. On Oct. 3, Grande posted a montage video by TikTok user Daniel Jensen showing herself in a variety of hoodies that she'd paired with boots. The piece starts out as if it's a fan edit, but brace yourself for the end. A song playing over the photos with the lyrics, "let me show you what your missing," comes on and is quickly interrupted by Jensen popping onto the screen, holding up a pair of jeans, and screaming, "A pair of f***ing pants!"

Yes, Grande really went there, and the result was hilarious. The full video was posted to her Instagram, but she has since removed it. However, if you want to see it, the video is still floating around Twitter.

Grande left no caption on the post, but several people, including celebrities, chimed in on the self-troll at the time. Justin Bieber commented, "haha wtf," while hairstylist and wig makeup César DeLeön Ramirêz simply added, "Crying!" While the singer didn't add anything herself, she likely found the troll funny, or she wouldn't have posted it.

After all, Grande is no stranger to trolling herself. She's shown several times that she's got a sense of humor about her style. In August, the singer used her Instagram account to prove that her ponytail has always been her look and took a bit of a light-hearted jab at herself.

In the photo, you seen Grande as a kid with a high pony atop her head. Her locks may be shorter than her extensions are now, but the look is still the same. In her caption, she wrote, "If anything .... she’s consistent."

Other celebrities have also made light of just how iconic Grande's look is — in a non-shady way, of course. During the 2018 European Music Awards, Camila Cabello decided to rock a pony a la Grande's, tweeting at her about how painful the look is.

Grande, not one to miss a joke, replied to Cabello that because the "Havana" singer still had hair, it probably didn't hurt as much. She didn't stop there, though. After Cabello had to remove the pony because of the pain, Grande continued to joke with her fellow singer that it must be nice to still feel thing because she no longer does.

While Grande is quick to clap back at a real troll on social media, she's also someone who knows how to not just take a joke but also make one herself. This time, it just happened to be about her lack of pants.