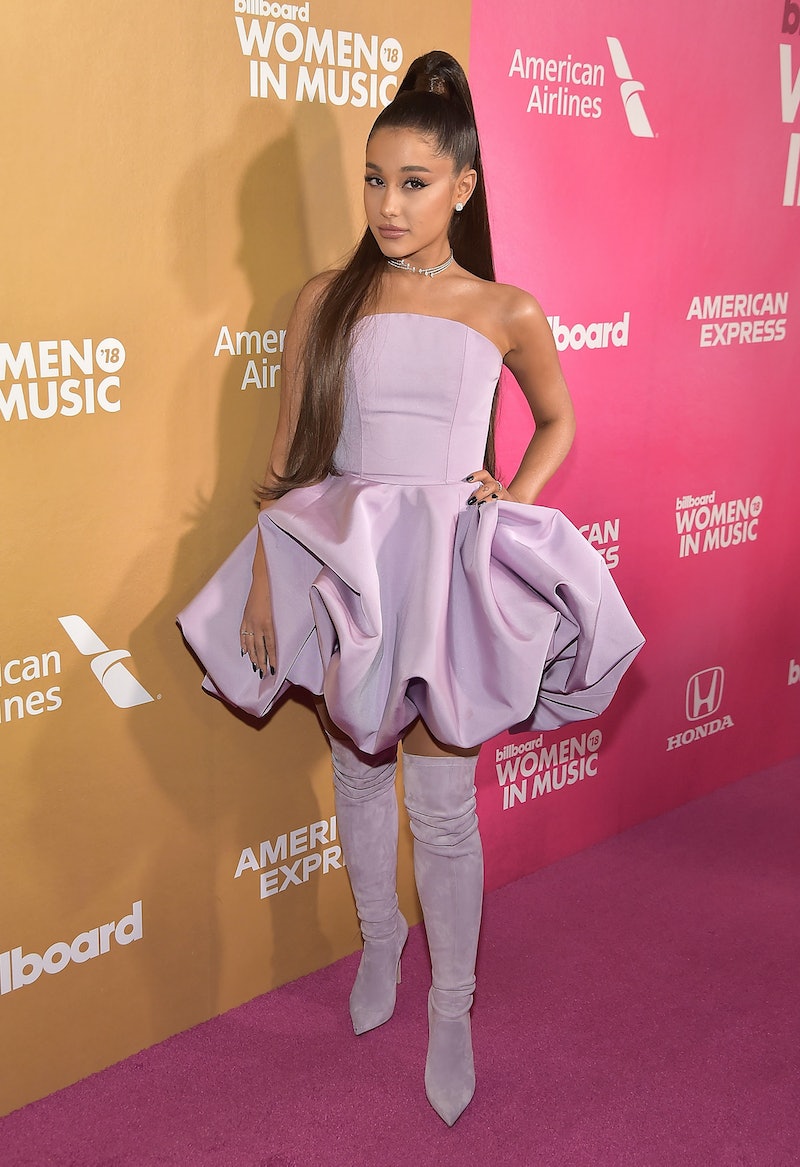 Sure, all of the Grammy nominees are in the headlines lately, but Ariana Grande may just take the cake when it comes to news. From her kanji tattoo debacle to the success of her single "7 Rings," she's on everyone's mind. Unfortunately, Ariana Grande's 2019 Grammy red carpet dress didn't actually make the red carpet this year. That doesn't mean she didn't wear it though. Turns out, Grande doesn't let a good dress go to waste.

Grande was scheduled to not only walk the red carpet tonight thanks to her smash hit "God Is A Woman" and her equally as popular album Sweetner, but she was also slated to perform. Unfortunately, Grande did not attend the show as a result of what appears to be a disagreement with producers regarding her song choices, according to Billboard. While neither party have fully addressed what happened, both have made comments, Grande on her Twitter and Grammy producer Ken Ehrlich in an interview with Rolling Stone.

While Grande isn't walking the carpet tonight, it's important to remember that while her latest ventures of "Thank U, Next" and "7 Rings," are mega hits right now, you can't forget that 2018 was a major year for the singer. In fact, despite the fact that she just dropped a new album, tonight was supposed to be all about Sweetner which was a banger. According to her latest Instagram post, she would have looked incredible while celebrating the album.

Grande took to her social media to post images of the Grammys 2019 dress. Of course, in the photos she posted, the artist is rocking her signature look including her ultra-long ponytail and winged liner. After all, it wouldn't really be an Ariana Grande look without them (hello, she even wore them to the Met Gala last year).

As for her dress, it's custom Zac Posen, according to her Instagram and features a massive ball gown silhouette in a pale blue.

While people didn't get to see the dress on the red carpet, it certainly didn't go to waste. Grande's adoptive dog Myron certainly seemed to have a good time with the gown.

Grande's appearance on the red carpet would have marked her first public appearance since making headlines for her mistranslated kanji tattoo. The singer attempted to get the kanji for seven rings on her palm, but unfortunately, ended up with something that meant BBQ grill instead.

Then, when she tried to fix the mistake, Grande went to her Japanese tutor who explained that she could get a new kanji placed above and between the existing ones to remedy the meaning. (Here's where the second oops comes in.) Grande placed the kanji below the existing tattoo resulting in the ink meaning, well, nothing really. It looks like fans would have gotten to see the tattoo up close night because Grande is sans gloves in her photos.

While Grande may have popped into headlines in the past few weeks for a reason that's, you know, not so great, her decision to wear her dress while at home tonight is proof that Grande knows that you should never let a good dress go to waste.