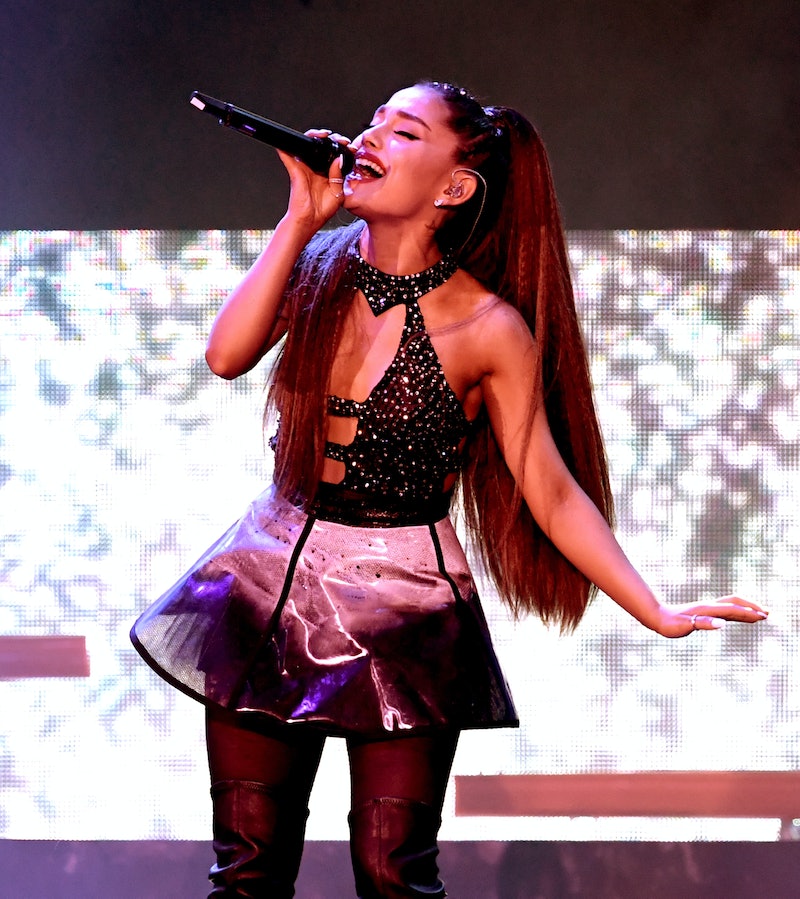 For fans of Ariana Grande, these last few days have given way to a whole roster of questions, and comparatively fewer answers, about the state of the singer's personal life and professional endeavors. Again, still not many answers on those fronts. That said, audiences wondering if Ariana Grande was going to cancel her upcoming Wicked performance in light of recent events can probably let out a collective sigh of relief. Choosing not to perform would have been completely understandable, but per Grande's first tweet following rumors of a breakup between her and Pete Davidson, it doesn't sound like that's the case.

In the tweet, Grande assured her exceedingly loyal following that, when it comes to the singer's "favorite musical of all time," there's almost nothing that could keep her away. Alongside a snapshot of what looks like an adapted version of the Wicked score — but with Grande's name printed where the character's ordinarily might be — she wrote,

Appropriately, given the context, Grande finished up her Monday morning tweet with a hashtag celebrating the musical and its widely praised Broadway legacy: "#wicked15."

Back in September, pop music fans and musical theater aficionados alike were pleased to learn that plans for a televised Wicked anniversary concert (celebrating 15 years of fantastical, foot-tapping goodness on the Broadway stage) were well underway at NBC. Aptly titled, A Very Wicked Halloween: Celebrating 15 Years on Broadway, the show will feature a string of Wicked-y performances from former cast members as well as additional musicians, like Grande. NBC's anniversary concert program is set to air the weekend before All Hallow's Eve, on Oct. 29.

Judging by Grande's tweet, it seems pretty safe to say she's doing everything she can to make sure this particular performance (which seems to hold special import to her) comes to fruition the way she intends it to. Plus, judging by the tweet's accompanying photo, it looks like Grande might've offered fans a little pre-show teaser ahead of NBC's actual Wicked concert to amp up the excitement. What's that? Well, nothing's been confirmed, but the script pictured in Grande's tweet does seem to suggest pretty strongly that she's going to perform "The Wizard and I" — Elphaba's iconic opening song in the musical — at the upcoming anniversary show.

OK, so the question of whether or not Grande is planning to cancel her Wicked appearance seems to be, more or less, taken care of. But, alas, a medley of additional ones still remain. Like, did Grande and Pete Davidson break up? When is she returning to the stage for good? Is Grande OK?

Over the weekend, the singer's fans were concerned when she cancelled her performance at a F--k Cancer fundraiser, after having taken some time off professionally in the aftermath of her ex and close friend Mac Miller's untimely death in September.

Then, hardly a day later, reports surfaced that Grande and Davidson split up. As fans of the couple know, Grande and Davidson first started dating around five months ago, around May 2018. By mid-June, the pair had announced their engagement via Instagram. And while neither Grande nor Davidson has commented on the recent wave of breakup rumors, according to an unidentified source who spoke to People, "[The relationship] was way too much too soon. It's not shocking to anyone."

Again, it seems important to reiterate that neither Grande nor Davidson has commented publicly on the breakup rumors just yet, so it still feels possible that the rumors are just that. However, if those reports do turn out to be true, then let's hope that Grande is focusing her energy on what's most important: Taking care of her physical, mental, and emotional health. If she's able to croon her way through a Wicked banger on national TV in the process, far be it for her fans to complain.