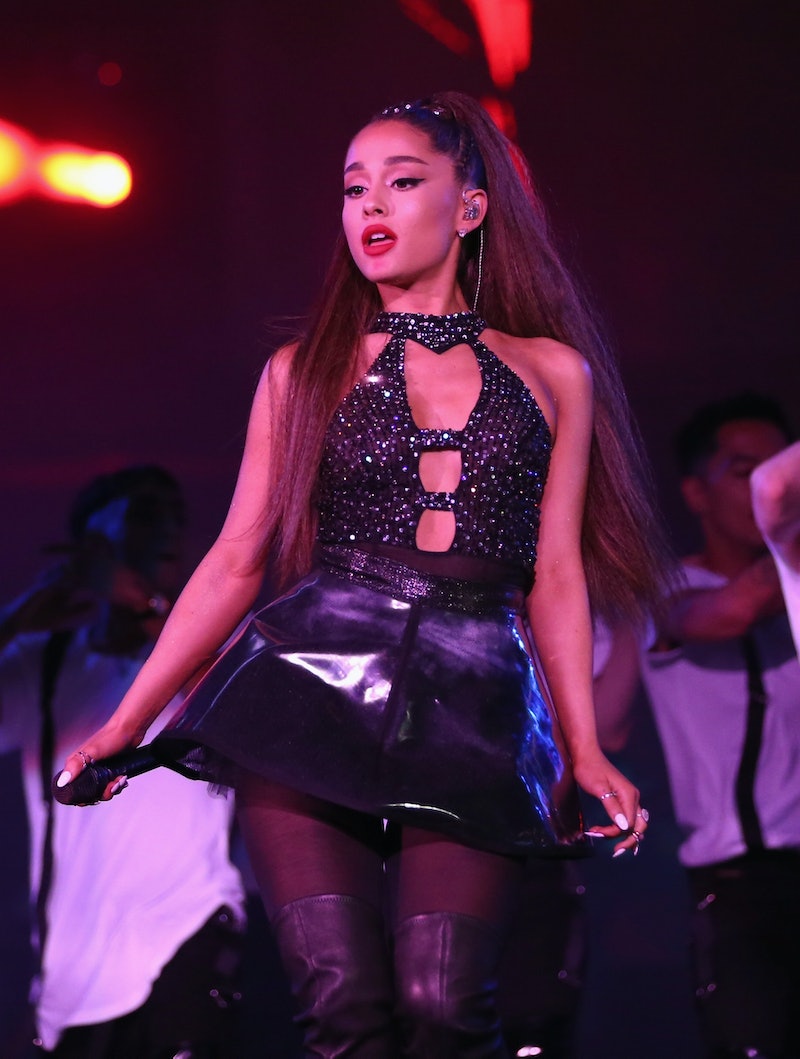 Ariana Grande has been slowly releasing new music for months now, but it looks like fans might have one more extra surprise on the way. On Friday, Dec. 11, Ariana Grande teased "7 Rings" with a photo on Instagram that sure looked like a potential music video. And she did it just a few hours after announcing that the song would be released the following week, on Jan. 18.

In the snap, Grande — wearing a lacy pink bralette and a pink faux fur coat — posed alongside songwriter Victoria Monet and her longtime best friend, Alexa Luria, both of whom also appeared in the music video for "Thank U, Next." The trio showed off their glamorous, coordinated outfits in front of an ornate mirror, where some production equipment can be seen far in the background. It sure looked like it could have been taken on the set of a music video. "💍💍💍 of 7," the singer captioned the photo, which she also posted in her Instagram story, along with a countdown to the "7 Rings" release date.

In November, Grande explained the story that inspired "7 Rings," which will help fans understand the significance of her Instagram caption. "'Twas a pretty rough day in nyc," Grande told a fan on Twitter about the adventure that inspired her to write an ode to her squad. "My friends took me to tiffany's. we had too much champagne. i bought us all rings. it was very insane and funny. & on the way back to the [studio] njomza was like 'b*tch, this gotta be a song lol.' so we wrote it that afternoon."

In another tweet, the singer revealed who the song's titular rings belong to: aside from one for herself, and two others for Monet and Luria, Grande also shares matching rings with her frequent collaborator Njomza, Courtney Chipolone — who played Gretchen Weiners in "Thank U, Next" — along with friends named Tayla and Kaydence.

"And my mom and nonna so technically nine but they got theirs after song was done," Grande explained to fans. (She also noted in January that her friend and video director Hannah Lux Davis also has one, bringing the total to 10 rings.)

Grande has been dropping hints about "7 Rings" for months now, with the song title first popping up in the "Thank U, Next" video, on the license plate of the convertible that the singer drives in the Legally Blonde segment. And in early December, Grande also confirmed to fans on Twitter that they can hear a short snippet of the track at the very start of the music video.

The singer has been teasing new music for months now, with titles of her upcoming tracks first appearing in the "Breathin'" music video back in November. On the Departures board in the train station, fans spotted the titles, "NEEDY," "ANNE," "REMEMBER," and "IMAGINE," which matched up with a leaked Thank U Next tracklist that blew up social media a few days prior. (Nobody from Grande's camp ever confirmed the track list, but Grande has confirmed that there is a song called "Needy" on her album.)

Then, in the "Thank U, Next" video, Grande once again hinted at songs called "Needy" and "Imagine," with the former title appearing on a shirt that she wore as Regina George. She released "Imagine," in the middle of December, after telling fans on Twitter that she couldn't wait for them to hear it.

And while Grande still doesn't have a confirmed release date for her upcoming fifth studio album, Arianators can expect that she will continue to drop songs whenever she feels like it. "My dream has always been to be — obviously not a rapper, but, like, to put out music in the way that a rapper does," she told Billboard in December.

"I feel like there are certain standards that pop women are held to that men aren't. We have to do the teaser before the single, then do the single, and wait to do the preorder, and radio has to impact before the video, and we have to do the discount on this day, and all this sh*t," she continued. "It’s just like, 'Bruh, I just want to f*cking talk to my fans and sing and write music and drop it the way these boys do. Why do they get to make records like that and I don’t?’ So I do and I did and I am, and I will continue to."

Will that same philosophy apply to music videos as well as singles? We'll probably have to wait until "7 Rings" drops next week, but we wouldn't be shocked if Grande decided to continue her streak of surprise releases with a brand new, fashion-forward music video as well.