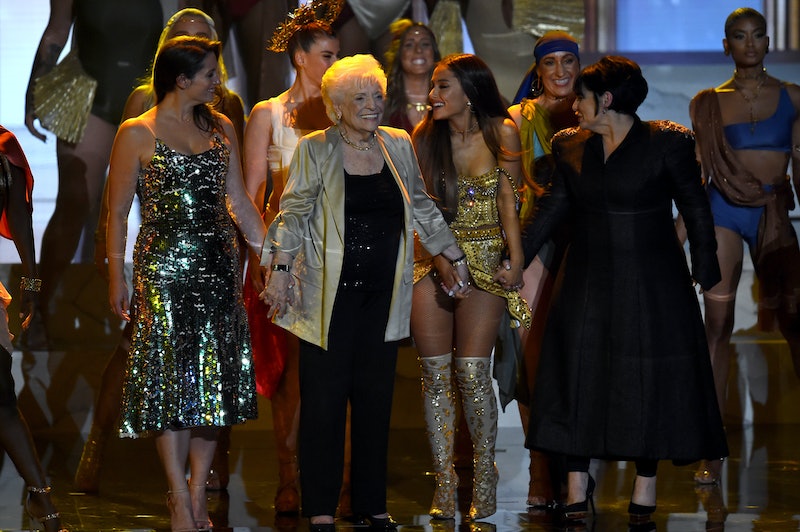 In a totally unsurprising turn of events, Marjorie Grande continues to be one of the greatest Arianators of them all. In a new photo that went on up on Instagram on Wednesday, July 24, Ariana Grande’s grandmother, Nonna, reads Ari’s Vogue issue as she gets her hair done. It truly is a perfect image. If Ari were to put this picture of Nonna posing with her granddaughter's very first Vogue US cover on an oversized sweatshirt and sell it on her website and/or at her tour merch counters, she could not take my money fast enough.

If you are an Arianator, you know this already, but for posterity's sake: Nonna is everything. You want examples? OK, give that arm a twist. There was the time Nonna sat next to her granddaughter at the 2015 American Music Awards and basically won the whole dang evening. Or how about when Ari appeared on the Zach Sang Show and revealed that the intro to "Bloodline" is actually a recording of her grandmother's thoughts on hearing aids? Or what about when Nonna appeared onstage at the end of Ari's 2018 Video Music Awards performance and, once again, basically won the whole dang evening? Or how about when she and Ari celebrated Billboard's 2018 Woman of the Year award by getting tattoos together? Or when she said she needed to figure out what she was going to wear before she was going to meet the host of The Tonight Show Starring Jimmy Fallon in 2016 because, as she told Ari, "You never know, I'm very naughty"? And do not forget about the time she said Ari inherited her "outstanding knees."

And when she sits down in the salon chair to get her hair done, she chooses her reading material wisely. Only the best for Nonna.

Nonna knows outstanding knees when she sees 'em, and she knows a star in the making when she sees one. When Grande appeared on Today back in 2014, Nonna was there in the studio to cheer on her granddaughter and talk about the local theater production of Annie that basically set the wheels in motion. She said,

“[I knew Ariana was a star] when she was about 6, 7, 8 years old. I made her audition for Annie. I was on the board of the Little Palm Theater in Florida, in Boca Raton, and I said, ‘You know, Ariana can do that.’ So she said, ‘OK, I’ll do it.’ She said, ‘Even if I get a little part.’ She became the star. She auditioned, and she became Annie.”

From that moment on, Ari's star was on the ascent. As the "God Is A Woman" singer told Complex in 2013, "I was 8 years old when I started. I played Annie, it was my first role, and then I just never stopped." Thank u, Nonna.

The Nonna content (the co-Nonna-tent?) is forever and always a gift. May everyone be so lucky to one day be told they have "outstanding knees."