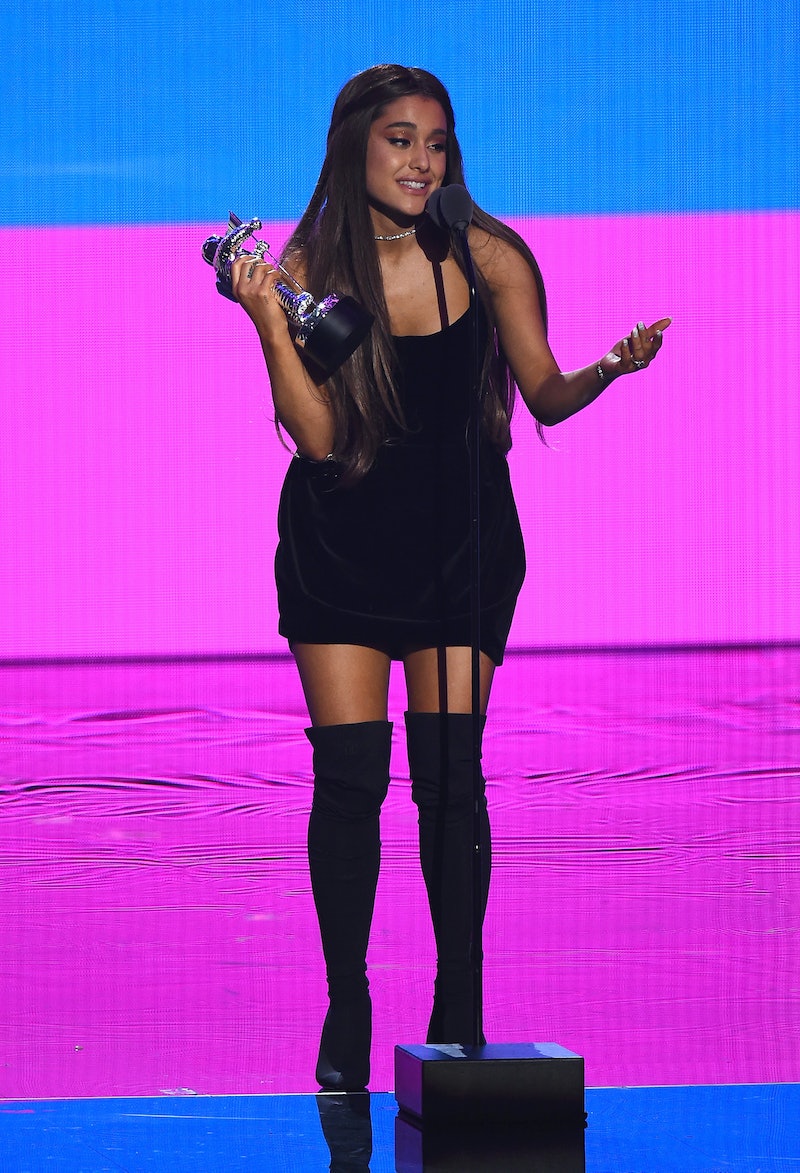 Ariana Grande may be going through a breakup right now, but she's still thriving — and so are all of her pets. Grande shared Piggy Smallz's first Instagram photo on Tuesday night, and it looks like the pig is getting quite used to her life in the spotlight. The first photo on Piggy Smallz's account is a blurry close-up of the animal, but she's just as cute as ever.

Of course, the new picture is far from the first time Piggy Smallz has been seen on Instagram. Grande has shared plenty of images and videos of the pig in her Instagram Stories over the past few weeks. Ever since Grande and her ex-fiancé, Pete Davidson, brought Piggy Smallz home in September, the "No Tears Left To Cry" singer has been sharing cute footage of the pet with her fans.

Piggy Smallz seems to have adjusted to life in Grande's New York City apartment quite nicely, too. The singer often shares footage of the pig making herself at home in her bed, often cuddling with the star. It's not clear exactly how the pig gets along with Grande's dogs, but it sounds like they're all just one big happy family. (Plus, the apartment has five bedrooms, so there's plenty of space for all of the pets to roam around.)

In the first photo posted on Piggy Smallz's account, Grande went with a simple caption, writing "h" alongside the blurry photo. If you look closely, you can make out one of the pig's eyes and a part of her snout in the picture.

Aside from featuring Piggy Smallz on her Instagram Stories, Grande also gave the pet a place of prominence in her music video for "breathin." The video shows Piggy Smallz walking around on what appears to be Grande's bed — and yes, it's adorable. And considering the fact that the song's lyrics are about Grande's struggle with anxiety, featuring her emotional support animal in the video makes total sense.

It definitely looks like Grande has full custody over Piggy Smallz after her reported breakup with Davidson. (Bustle previously reached out to reps for Davidson and Grande about the split, but did not hear back.) Still, the Saturday Night Live star will always have a part of the animal with him, in a way: Davidson has a Piggy Smallz tattoo.

Honestly, it would be a shame if he covered that one up, too. As seen in an Instagram photo shared by tattoo artist Mira Mariah (@girlknewyork), the line work is pretty lifelike and captures the animal's lovable fuzziness perfectly.

Either way, though, Piggy Smallz looks to be in great care under Grande's watch. She clearly has a deep connection with the sweet animal. And if Piggy Smallz is helping the singer with her anxiety, that's even better. Hopefully, Tuesday's post will be the first of many from Piggy Smallz's Instagram account — she's way too cute not to be a social media star.