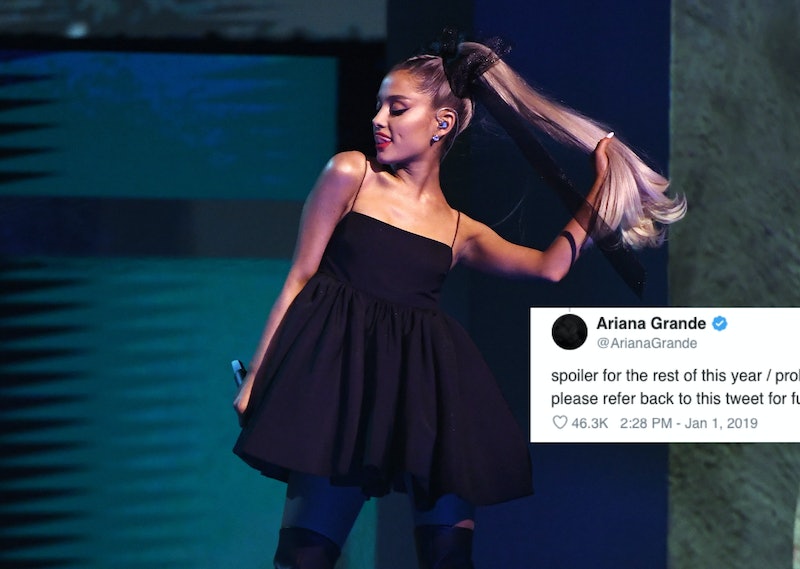 Is she reconciling with Pete Davidson? Back to Big Sean? Or is there a new mystery man romancing the chart-topping singer? After a fan on Twitter recently shared a headline that read, "Who Is Ariana Dating NOW?!?," Ariana Grande decided to respond to dating rumors directly, as E! News reported. Make no mistake, she was crystal clear about it, too — just in case there's any confusion in the future.

On Jan. 1, Twitter user @everydaysus tweeted a photo of Grande with the aforementioned headline from Elite Daily and simply captioned it, "what." Good question, right? Inquiring minds want to know.

Shortly thereafter, Grande chimed in on her fan's thread with an equally solid question, asking, "can they tell me too ?" Totally fair that she'd want to know who she's romantically involved with. Wouldn't you?

Then, when another fan replied to the "Who Is Ariana Dating" thread by jokingly saying, "spoiler. its me!", Grande replied yet again. She wrote,

"spoiler for the rest of this year / probably my life: it’s no one. please refer back to this tweet for future questions."

Guess that answers that then: Grande is planning on staying single for all of 2019 — at least. So she's basically preemptively shutting down any rumors that pop up in the next 12 months.

This technically isn't the first time she's sworn off dating lately, so there's a good chance she's for real about it now. It's hard to imagine that she'd end up staying single for the rest of her life — not that there'd be anything wrong with that, of course — but it seems like 2019 is all about self-love for Grande.

Take, for example, the empowering lyrics to her smash hit single, "Thank U, Next." After the first chorus, the 25-year-old sings:

"Spend more time with my friends / I ain't worried 'bout nothin' / Plus, I met someone else / We havin' better discussions / I know they say I move on too fast / But this one gon' last / 'Cause her name is Ari / And I'm so good with that (so good with that)"

You hear that, world? Yes, there *is* someone new in her life. Her name is Ari, aka Ariana, aka she's now in a close, personal relationship with herself.

Grande was last involved with Saturday Night Live's Pete Davidson, who she reportedly starting dating around May 2018. By June 15, the couple was engaged.

For the rest of the summer and into the fall, Grande and Davidson looked totally in love everywhere they went. On Oct. 14, though, TMZ and People both reported that they'd decided to split. "It was way too much too soon," a source told People. "It's not shocking to anyone."

While it might not have been shocking, it was definitely sad. On the other hand, it did seemingly give her the idea for "Thank U, Next," for which the world is ever-grateful. There probably won't be any more lyrical name-dropping for Grande in 2019, judging by her recent tweet about staying single. Unless she's name-dropping her new love — herself.