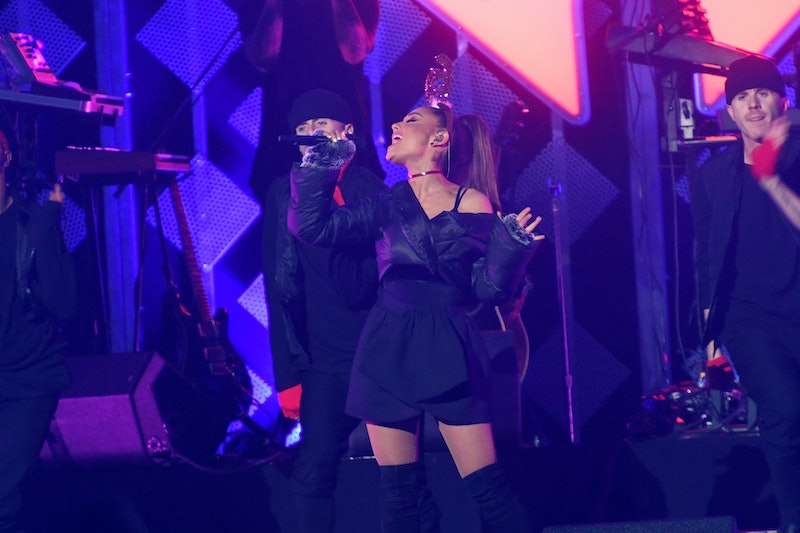 UPDATE: According to TMZ, Ariana Grade has suspended her world tour until further notice — including canceling her upcoming show at the O2 arena — while she and her team "further assess the situation and pay our proper respects to those lost." The site goes on to report that her shows have been canceled through at least June 5. In a statement to EW, Grande's management announced,

Due to the tragic events in Manchester, the Dangerous Woman Tour with Ariana Grande has been suspended until we can further assess the situation and pay our proper respects to those lost. The London O2 shows this week have been canceled as well as all shows through June 5 in Switzerland. We ask at this time that we all continue to support the city of Manchester and all those families affected by this cowardice and senseless act of violence. Our way of life has once again been threatened but we will overcome this together.

EARLIER: Although there have been reports that Ariana Grande has canceled her world tour following the terrorist attack that occurred during her Manchester, England, concert on May 22, there's a possibility that her concerts will continue. After her concert on Monday night, a suicide bombing killed 22 people and injured at least 59, per The Guardian. ISIS has claimed responsibility for this attack, according to ABC News, and rumors that the singer would not continue her tour throughout Europe after this act of terrorism understandably followed. But, according to statements made by her next scheduled venue in the U.K. The O2 arena, Grande's London concerts have not been canceled as of yet. Bustle reached out to the singer's publicist for comment, but did not receive an immediate response.

Located in London, The O2 arena can seat 20,000 people, which is just shy of the Manchester Arena's 21,000 capacity. Yet, this large-scale concert has not been called off by the London arena, with the Guardian reporting that it will be up to Grande to cancel the concerts that are scheduled for May 25 and May 26.

This is based on a tweet from the Twitter account of The O2 arena, which stated, "We're still in contact with the tour promoters regarding a final decision. As yet the tour is not officially postponed or cancelled, despite media reports."

Along with the tweet, The O2 has added the following message to its event page for the Grande concert:

"Along with everyone else, we are shocked and saddened by the terrible tragedy in Manchester. Our thoughts and prayers are with those affected and their families.

Ariana is due to perform at The O2 on Thursday and Friday and we will advise as soon as we can as to the status of those shows."

After The O2, Grande is scheduled to perform in Antwerp, Belgium, at the Sportpaleis on May 28. There is currently no update on the Sportpaleis website about the status of the concert. The same goes for the next planned stop of the tour, the Atlas Arena in Lodz, Poland. Because of high demand, Grande is scheduled to do two shows there — on May 31 and June 1 — but at the time of this writing the event pages for both shows don't mention the current status of the concerts after the Manchester attack.

In addition, in a Variety report from Tuesday, an anonymous source alleged that Grande had not postponed her tour, claiming, "This is about the victims, it feels silly even to be thinking about the tour at this point. They're still assessing the situation and how she's doing."

On May 23, the Daily Mail shared photos it had obtained of Grande stepping off a private jet in her hometown of Boca Raton, Florida. With the singer presumably still in the U.S. and mourning the loss of life that occurred at her concert, there's a good chance that The O2 concerts — and the following European shows — will eventually be canceled. But, at this point, it seems like the choice on how to proceed is up to Grande.