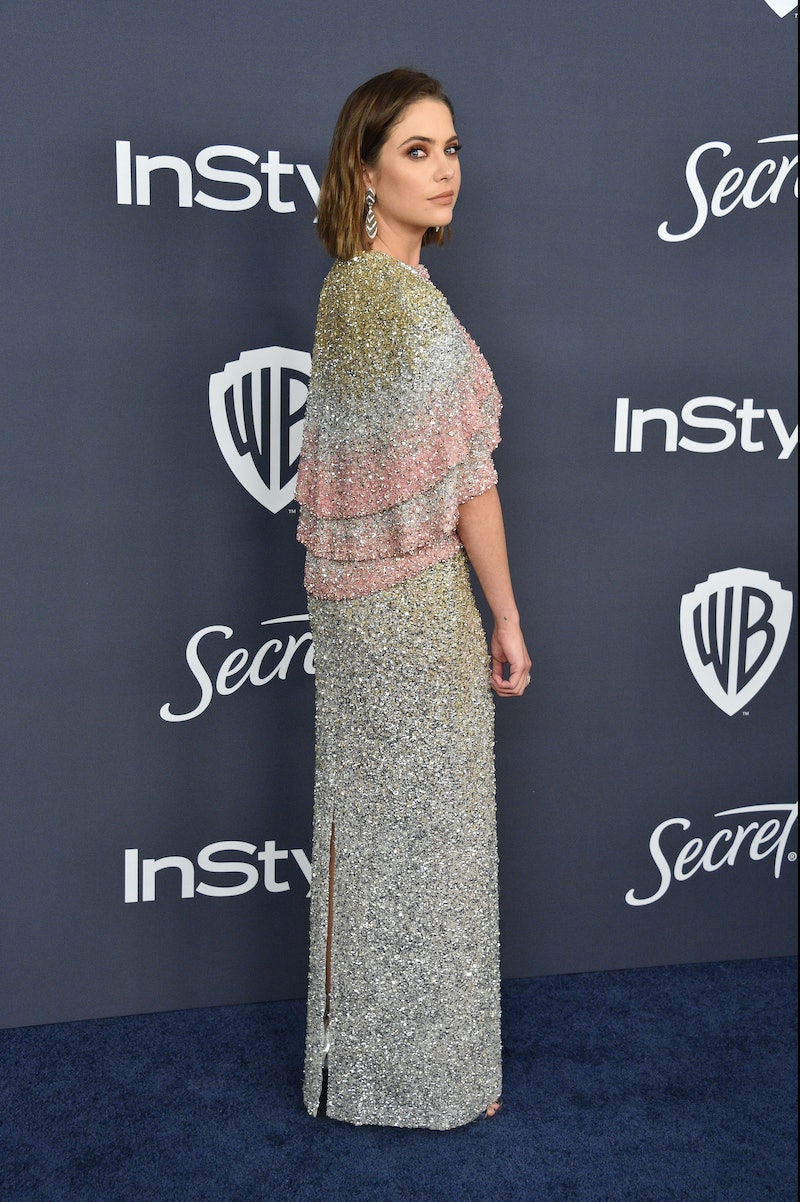 2020's award season has just kicked off, but there are already notable trends emerging. Oversized sleeves a la Beyoncé and suiting like Phoebe Waller-Bridge's Ralph & Russo ensemble were all themes that are making themselves seen. But Ashley Benson's Golden Globes cape took one of the trends from the night and flipped in a new direction.

While yes, you could hardly look in any direction without seeing a puffy sleeve during the ceremony and red carpet on Jan. 5, the suiting trend was still a standout. Many of the looks featured a naked blazer look aka a blazer with nothing underneath. Kerry Washington rocked the trend with an added harness beneath. Fleabag's Phoebe Waller-Bridge wore a more conservative (but still obvious) take on the open blazer. At the after party, Hailey Baldwin chose a tuxedo dress in the same style. While all the women who chose open blazers looked stunning, Ashley Benson wore the trend in a totally different way that may have won the evening.

While Benson did not walk the Golden Globes red carpet, she did appear at after parties for the nominees and winners. For her look, she opted not for an open blazer, but an open cape made of glittering pastel beading and scalloped layers. Sorry to open blazers because open capes are now where it's at.

According to Benson's Instagram account, the look is from Georges Hobeika's couture fall and winter 19/20 line. Benson paired the open cape with a matching fully beaded skirt that fell to the flow in a sleek and simple (well, as simple as head to toe beading can be) column silhouette. For her jewelry, Benson went for statement making drop diamond pendant earrings and a white and yellow gold cocktail ring with sapphires. Both piece were from Italian house Buccellati.

Benson wasn't the only former Pretty Little Liars star that made headlines thanks to their style at the Golden Globes, though. Troian Bellisario also made an appearance at the after parties (likely celebrate her Where'd You Go, Bernadette? costar Cate Blanchett). No, she didn't wear a blazer, but she did decide to rewear her wedding dress.

While sure, the naked blazers trend doesn't seem to be going anywhere any time soon (it's been popular to a while now) don't discount the naked cape. Ashley Benson may have just taken the well loved trend in a whole new direction.

More like this
Jennifer Lopez Wore A Naked Dress To The Shotgun Wedding Premiere
By Dominique Norman
Kendall Jenner Just Rocked A Sheer Dress & A ‘90s Rosette
By Allie Fasanella
30 Of Kendall Jenner’s Best Runway Looks To Date
By Dominique Norman
Looking Back At Kylie Jenner's Best Fashion Week Looks
By Allie Fasanella
Get Even More From Bustle — Sign Up For The Newsletter
From hair trends to relationship advice, our daily newsletter has everything you need to sound like a person who’s on TikTok, even if you aren’t.