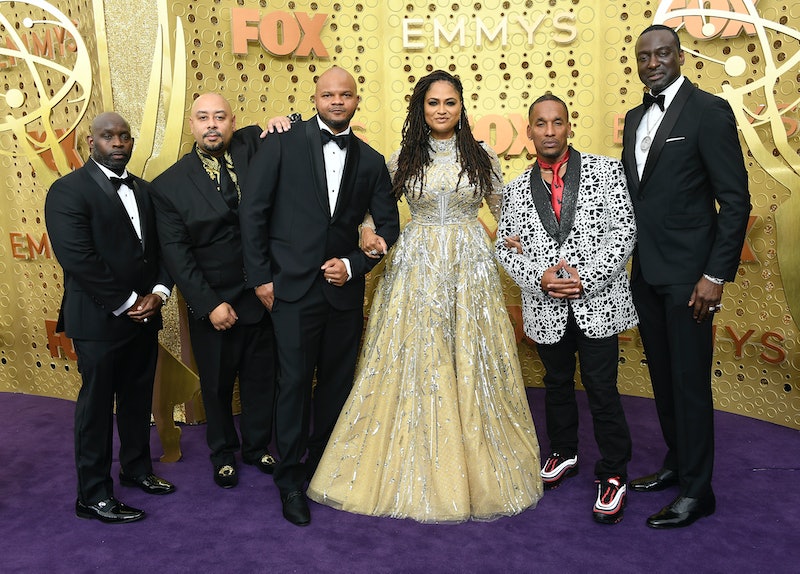 Ava DuVernay brought the story of Central Park Five — now referred to as the Exonerated Five — to Netflix with her Emmy-nominated four-part miniseries, When They See Us. That was far from the end of their relationship, though. DuVernay brought the Exonerated Five to the 2019 Emmys as her dates, just like she had promised. Antron McCray, Kevin Richardson, Yusef Salaam, Raymond Santana, and Korey Wise stood by DuVernay on the Emmys red carpet on Sept. 22. Rather than talk fashion, they shared with E!'s Giuliana Rancic how meaningful it is to them that this miniseries told the real story behind their wrongful incarceration and that it has resonated with so many people.

Following the announcement that When They See Us was nominated for 16 Emmys, The Hollywood Reporter announced that director and writer DuVernay would be bringing the Exonerated Five to the awards show with her. She was, of course, true to her word. On the carpet, DuVernay shared with Rancic how she'd been inspired to tell the true story of these five men who were sentenced to prison as teenagers for a rape in Central Park that they hadn't committed after Santana had reached out to her on Twitter.

In her interview with Rancic, DuVernay shared how she felt a connection to their story as she was a teenager in Compton at the time that McCray, Richardson, Salaam, Santana, and Wise had their childhoods in Harlem put to an abrupt end. And, as the positive reviews, viewers' response, and Emmy noms indicate, their harrowing tale connected with audience members as well.

Meanwhile, Wise said the making of and response to When They See Us is "a blessing, it was all a dream to become a reality." And Salaam brought up how the series was important for the Exonerated Five to see as well, since the men hadn't shared their unique experiences with one another before. "We never spoke about what our experiences were like," Salaam said. "This was really the first time after almost a decade, I believe, for us to have seen each other's stories and to really vibrate with it on a different level. And now the whole world got an opportunity to see it and it's just an honor."

When They See Us showed how some people always believed and supported the Exonerated Five. But from 1989 to 2002, they were considered guilty of a heinous and violent sexual assault by the justice system. Salaam said that it was "an honor" that the dramatized series was able "to humanize us in such a magnificent way."

Rancic brought up how among all the celebrities, many attendees of the Emmys wanted to meet the real men of the Exonerated Five. The reaction they received during Jharrel Jerome's acceptance speech for Outstanding Lead Actor in a Limited Series or Movie (for portraying Wise) certainly demonstrated that.

DuVernay's When They See Us helped to put the injustice these five men faced in a deeply personal perspective. And by attending the 2019 Emmys, McCray, Richardson, Salaam, Santana, and Wise continue to be able to shed light on their story and advocate for themselves and others.