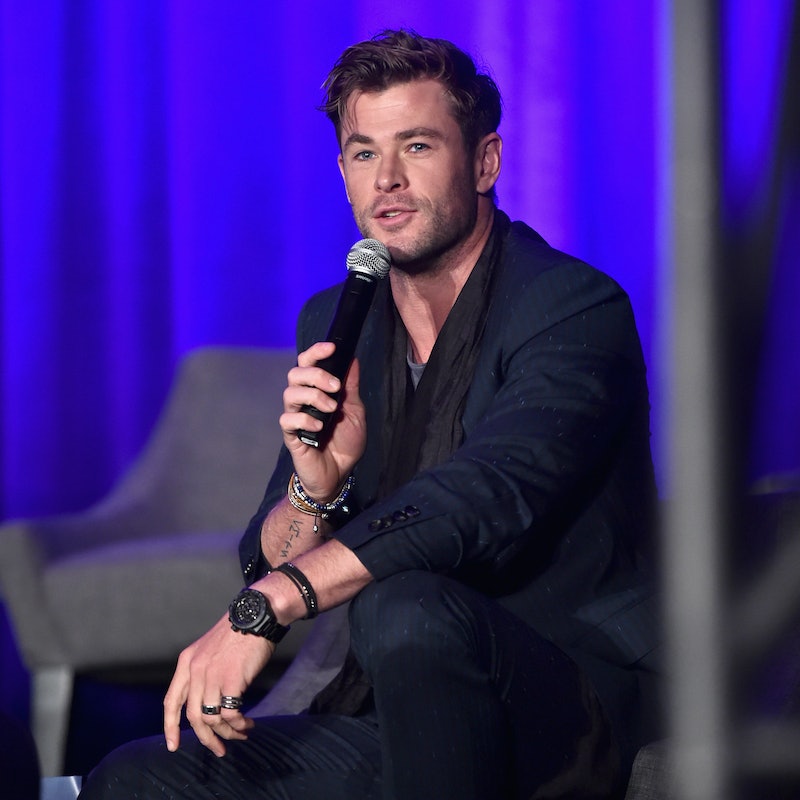 Spoiler seekers, be warned: Thor won't be stealing Marvel's thunder. The reason? Even Chris Hemsworth hasn't seen Avengers: Endgame. We've been doing the press tour, and everyone's like, 'tell us about the movie.' And we're like, we can't," the actor behind the MCU god said during the April 9 episode of The Ellen DeGeneres Show. "I have a rough idea of what happens, but, no, I have not seen the film and I do not know really how it ends."

Adding to Hemsworth's confusion, he shot both last year's Avengers: Infinity War and Endgame within eight months of one another, and, at times, the overlap made his head spin.

"[Endgame] was being written while we were shooting, and the other one was being edited and so on," he also shared with DeGeneres. "And so by the end of that period ... I was just like, whatever I'm saying today, this is cool. And I'll trust the directors have us in the right place."

Now, in a sense, he feels he's in the same boat as moviegoers who will be flocking to their local theaters when Endgame premieres on April 26. He added: "I feel like a fan of this whole thing and much as anyone else and interested to see if I live or die or what happens to me."

If Thor should live to see Endgames's conclusion, however, DeGeneres was eager to know if Hemsworth would be down to keep playing the character in possible future movies. As Hemsworth, who noted there's never been "anything in cinematic history that's ever been building to a film like this," revealed to the daytime talk show host:

"This is sort of Marvel's phase three wrapping up a culmination of all this journey. Whether or not they go off and then shoot other things or do prequels or sequels or whatever they can do... I mean, Loki, my brother's come back nine times every time he dies. He just keeps appearing. So who knows what's in store for anyone. Me, personally, it's the best fun I've ever had, and I'd be happy to do more if they wanted me, but... More than happy."

Of course, he's not the only Avenger to claim he or she hasn't seen Endgame. Joined by co-stars Robert Downey Jr. (Iron Man), Scarlett Johansson (Black Widow) and Paul Rudd (Ant-Man) on April 8's Jimmy Kimmel Live, Hemsworth joked that he was the only one in the group who had seen the film.

Downey Jr. also chimed in to tell Kimmel that, though they're "not supposed to see it," he'll be playing Endgame "on a loop" during an Easter screening at his Malibu home. There will be one major caveat, however, he joked: "We have to sign NDAs or do gag orders or something."

Clearly this tight-lipped group is adept at keeping secrets — though the same may not exactly be said of their castmate Tom Holland (AKA Spider-Man). Earlier this month, the film's co-director Joe Russo revealed that, after a series of purported spoiler slips, Holland never even got an Endgame script. according to IndieWire.

“Tom Holland gets his lines and that’s it," Russo said during an April 1 Avengers: Endgame Indian Anthem event, per IndieWire. "He doesn’t even know who he’s acting opposite of. We’ll just, we use like very vague terms to describe to him what is happening in the scene, because he has a very difficult time keeping his mouth shut.”

With all these safeguards in place, fans will likely just have to wait and see Endgame for themselves to find out how Marvel will wrap up this epic Avengers chapter.