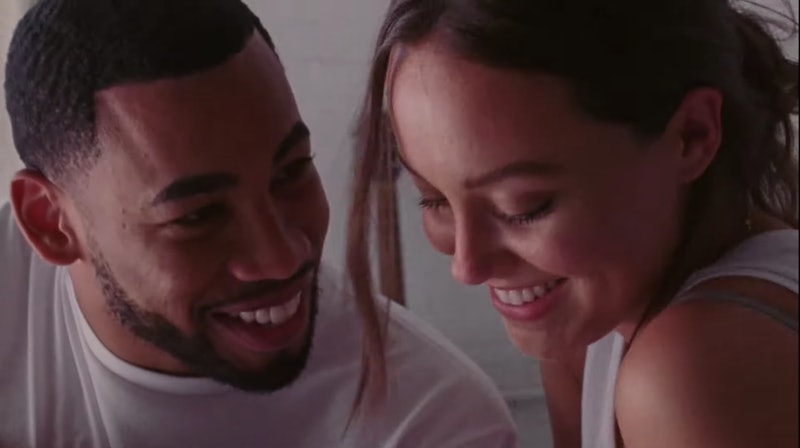 He might not have been chosen to be the new Bachelor, but he's still the object of affection thanks to his newest gig as music video boyfriend. Bachelorette and Bachelor in Paradise alumnus Mike Johnson is making his music video debut in Bailey Bryan's "Where We Started." In the video, he plays the country-pop singer's boyfriend as they go through the ups and downs of a relationship. In an interview with People, Bryan confessed that she thought of Johnson when it came time to film the video because, "his vibe is exactly what was needed" to bring the story of the song to life.

The video opens with Johnson and Bryan still in the Honeymoon phase of their relationship, filming each other on an old-fashioned video camera, before shots of them looking distant and upset appear. The clip intersperses the couple's happiest moments — holding hands on the subway, cuddling in bed, enjoying a romantic picnic — with the hard times they're experiencing, with an emotional Bryan singing directly at the camera. "'Where We Started' is a song that is both hopeful and heart-wrenching at the same time," Bryan told People.

"I grew up enamored with all things rom-com and Taylor Swift music videos, and the concept for the video was basically a romantic montage with a really cute boy that puts you all the way in your feels when you watch it," she continued. As for this particular "cute boy," Bryan gushed that Johnson "couldn’t have been easier or more fun to work with," on his first ever music video shoot.

For his part, Johnson confessed to the outlet that he was "unsure of how everything would go" when it came to filming his music video debut, but Bryan instantly put him at ease. “I just felt honored to even be in her video," he said. "Then I saw her talent in person … that woman is going places!"

Of course, Bryan's music video is far from Johnson's first flirtation with the music industry — the Air Force veteran has been linked to singer Demi Lovato following his time on The Bachelorette. In July, after Johnson tweeted a request to know where his "future wife" was hiding, the singer responded with, "IM RIGHT HERE MIKE I'M RIGHT HERE BOO MY MOM ALREADY LOVES YOU TOO." According to Us Weekly, when Lovato's posts were mentioned to Johnson at the Men Tell All taping a few weeks later, the former Bachelorette contender said he was "flirting with her too" and "would definitely take her out for an initial date."

In September, after weeks of flirting on social media, Johnson confirmed to Entertainment Weekly that he and Lovato had indeed gone on that date. "Demi Lovato and I went on a date," he told the outlet, though he declined to offer any further details about their night out. "The woman is quite astounding and amazing. And that's all I'll say on that."

A few weeks later, Johnson admitted that things had progressed in their romance, telling fellow Bachelor alums Ben Higgins and Ashley Iaconetti on their podcast that they had "gone on more than one date." The fan favorite continued, "I like her tattoos. We both have a lot of tattoos and she kisses really well." He also clarified that he was hoping to get to know Lovato as "regular individuals" away from all of the cameras. "I am very private with my relationships straight up," Johnson said.

They may be keeping their relationship private for now, but perhaps the next time Johnson stars in a music video, it will be with Lovato by his side instead.