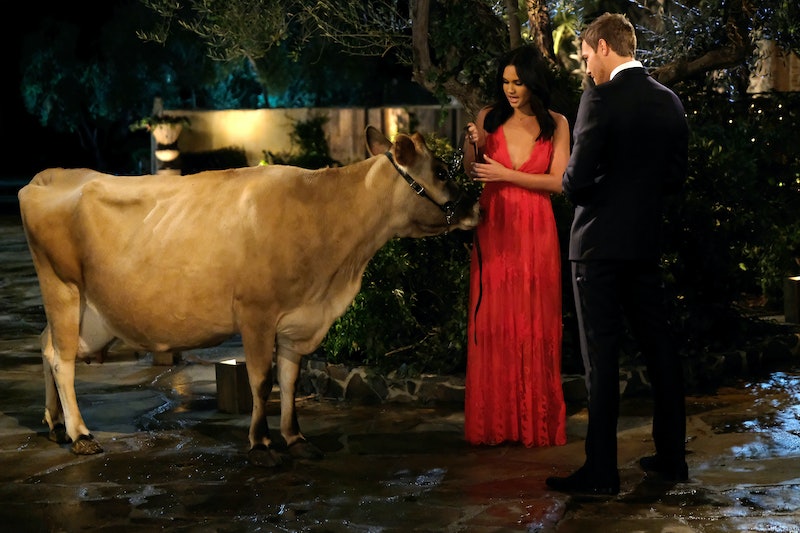 It's still far too early to predict who will win Peter's final rose, but based on all the tweets about Ashley P., it looks like Bachelor fans have already decided who they want their next Bachelorette to be. However, unlike the other contestants on the show, Ashley P. isn't a person — she's an "emotional support cow" who Jenna brought on the show as part of her grand entrance.

While most of the women opted for entrances that referenced Peter's job as a pilot or his now-infamous windmill date with Hannah Brown in Greece, nursing student Jenna decided to take a more eccentric approach. "I figured you might be nervous tonight, so this is my emotional support cow, and you can borrow her," the 22-year-old told Peter, leading the cow up the driveway towards the Bachelor Mansion. Though Ashley P. didn't tell Peter much about Ashley P., she still managed to win over the hearts of viewers everywhere with her very limited screen time.

Ashley P. — described simply as a "vegetarian" by the Bachelor producers — made such a big impression, in fact, that Twitter was immediately flooded with requests to make this small-town cow the next face of the Bachelor franchise.

It was hard not to notice the instant chemistry between Peter and Ashley P., although the cow quickly disappeared offscreen, leaving viewers wondering what happened to her and whether or not she earned a rose that night. Unfortunately, Jenna, the contestant who introduced her to Peter — and the world — was eliminated after the first rose ceremony, but that didn't stop Bachelor Nation from hoping that Ashley P. made it through without her.

Of course, if the producers could decide to go the more traditional route and cast a human being as the next Bachelorette, there's still a chance for Ashley P. to return to the small screen in another way: namely, by joining the upcoming season of Bachelor in Paradise, where she will likely become the most charismatic cow to ever hit the beaches of Mexico.

Bachelor Nation will have to wait nearly three months to find out who ends up with Peter's final rose, but right now, it seems like the issue of the next Bachelorette has already been solved, one episode into the new season.

More like this
10 Photos Of The Wildest Limo Arrivals From 'The Bachelor' Premiere
By Brad Witter
A Guide To All Of Zach Shallcross' 'Bachelor' Filming Locations
By Brad Witter
Zach Swears He Didn’t Look Up Contestants Before The Bachelor Began Filming
By Brad Witter
'Bachelorette' Vet Clare Crawley Unveiled 2 Special Wedding Day Accessories
By Stephanie Topacio Long
Get Even More From Bustle — Sign Up For The Newsletter
From hair trends to relationship advice, our daily newsletter has everything you need to sound like a person who’s on TikTok, even if you aren’t.