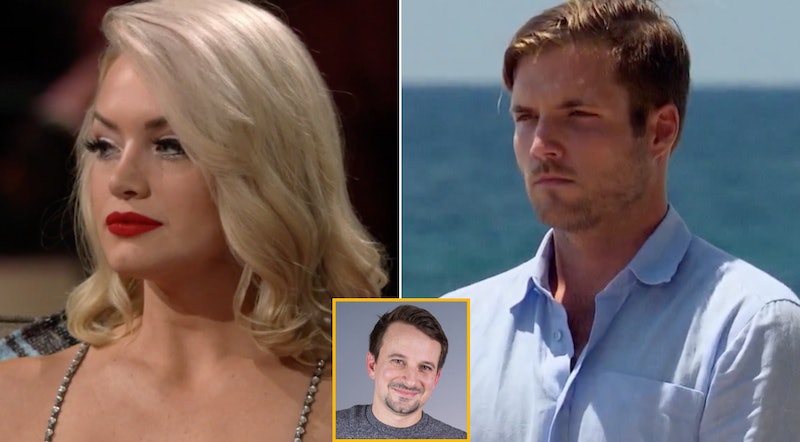 Bachelor in Paradise Season 3 star Evan Bass knows Bachelor franchise love: He married Carly Waddell after meeting her in Paradise, and they now have a daughter, Bella. Read what Evan has to say about the Jordan & Jenna fiasco and the rest of Bachelor in Paradise's remaining relationships.

Another season of Bachelor and Paradise has come and gone, leaving a Monday and Tuesday void where we may be forced to actually interact with our family until The Bachelor returns in January. The final week of Paradise showcased the best and worst of what this show embodies. It can be powerfully redemptive for people like Chris and Glittery Krystal, but it can also reveal the true colors of someone like Kamil, who blithely left Annaliese hanging with an empty Airbnb for a week.

The big drama, though, is Jordan and Jenna, after it was revealed that Jenna may have been playing Jordan — and all of us — for fools, and may not have been in love with Jordan at all. (Ed note: Jenna has denied the claims that she sent text messages to another man she was allegedly having an affair with telling him she was using Jordan for her career and didn't care about him; Jenna and Jordan have since broken up.) I am firmly Team Jordan and am deeply committed to supporting either his return to Paradise next year, or a bid for Bachelor. He truly gave himself to the process, and while it's unclear what is true or not about Jenna, we know that Jordan is amazing and deserves love as much as any of us castoffs.

It’s sad to think a few bad decisions overshadowed how much love and advertising revenue was found on Paradise. Let's not forget that so much good came out of this season, too, like Kendall and Joe and Astrid and Kevin's rekindling. The power of Paradise is rooted in the freedom for these couples to choose each other, and that’s what I admire about each new crop of Paradise campers: That despite seeing all the pitfalls others have experienced, they still come to the beach full of optimism (well, most of them do). Sure, they often they forget the mistakes of others and fall into the exact same traps, but as we saw in Chris' emotional breakdown in the finale, there are some who manage to rise above and develop a beautiful relationship, perhaps for a month or longer.

I find the bravery of subjecting yourself to reality TV and its subsequent potential hate hugely inspiring. Chris and Krystal didn’t have to go on Paradise, but what the heck did they have to lose? They could’ve licked their wounds and hidden from public, but they dove headfirst into a second round of Twitter judging. I applaud them, and I’m so happy for them. Will they last? Who the heck knows, but I'm cheering them on.

It feels like the most recent seasons of The Bachelor, The Bachelorette, and Bachelor in Paradise were all deeply flawed. Aside from Paradise being Jordan's breakout season (for better or worse), it was a real ensemble season where people traded partners like poker chips and no one person was really the star. I’ve never seen an episode like Monday night's, where couples were dropping like flies. Olivia and Jordan declined the fantasy suite; Robby and Shushanna did not find any sweet sorcery. The strongest couples, Kendall and Joe and Kevin and Astrid, blew up in little more than fraught 3-minute conversations. Hundreds of hours of beach time led to two abrupt break-ups, each with one partner storming away on the hot sand. But then 24 hours later, in front of a live studio audience, the same couples were professing their love (and commitment to attend Dancing With the Stars) to each other.

It’s fun for me to reflect on this Paradise in the context of my own journey. Every couple has their cross to bear: Carly and I had the luxury of living within 10 minutes of each other, but typically the challenge is leaving Paradise and beginning a long-distance relationship. Carly and I had to deal with the challenges of a blended family, of which there are many. Each Instagram like and comment will now be judged, and every time you use Johnson and Johnson baby products, you will be lectured by Instagram direct message. I look back to two years ago on the beach, when I didn't know what would happen post-Paradise and how I'd be received, with a sensitivity to the world and its highly fickle emotions.

Here are my Paradise Accolades for the season:

Here For The Right Reasons: Annaliese deserves some credit for this one

Most MIA: Wells somehow got a cast credit without actually ever being shown. Just kidding, we saw him... a little.

Best Dad: Kenny, for bailing on Paradise for his daughter’s recital

Most Obvious Attempt To Extend His 15 Minutes Of Fame: Robby

Best Mental-Health Advocate: Kevin, for being open about therapy

Best Analogies: Eric, for reminding me that I love cheese and will move anywhere with it

Most Self Restraint: Kendall, for not turning Grocery Store Joe into a piece of taxidermy

Best Long Game: Ashley I., who I'm counting because she appeared on this season to finally get engaged to Jared

Best Friend: Bibiana, for being the first person to get a Doctorate in Counseling on Paradise

Best Dressed: Wills, for making it OK for me to go floral again

Nicest Player: Venmo John, for kissing more people than anyone in Bachelor history

Well folks, until next year, I will desperately try to stay relevant on Twitter, I wish you a happy fall and holiday season. May your sparkling Rosé glasses stay full and your favorite Bachelor couples last forever!