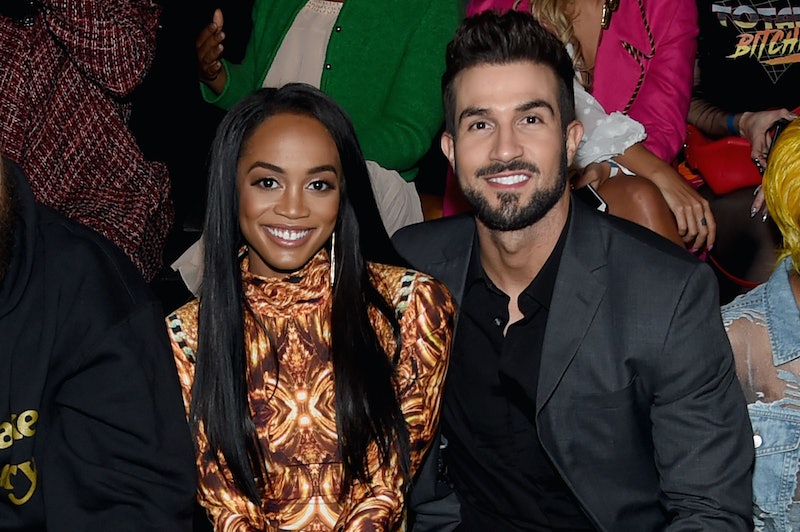 Bachelor Nation, prepare yourselves for some news. And spoiler alert: It has nothing to do with Bachelor: Winter Games. As revealed during a TV appearance Wednesday, Bachelorette Season 13 lovebirds Rachel Lindsay and Bryan Abasolo are moving to California in the near future. The newly engaged couple spilled the deets with talkshow host Wendy Williams, leading some to believe that their relocation is all part of their plan to have a spinoff series.

According to Bryan and Rachel during the interview, having their own reality show isn't on their radar, and they want to take time away to focus on their relationship. But a move closer to Hollywood, however, shows that the couple isn't exactly ruling the idea of having one out either. Just why the pair have decided to call the Golden State "home" has yet to be shared, but Williams, as well as her esteemed studio audience, seems convinced that being in the midst of the biggest names in Hollywood has a lot to do with it.

Not that Rachel and Bryan aren't household names back home or anything. In fact, after Bachelorette Season 13 wrapped, their newfound fame followed them to both Miami and Dallas. But according to Rachel, her family and friends help her retain some sense of normalcy by keeping her level-headed. She said, "Dallas keeps me grounded, and my job keeps me grounded, and I think that's what's really nice about it."

In the interview, Rachel revealed that she's still practicing law in Dallas, but she's getting ready to take the California state bar exam, so that she can practice on the west coast. As for Bryan, you won't find him in his Miami office anytime soon. He explained, "I'm actually taking a break at the moment, but I'm in the process of getting my license in California, which is where we plan on going."

It seems as though there's only one logical reason as to why Rachel and Bryan would trade in their new, yet comfortable, lifestyles for the city of angels; and that's to ensure that they keep their names in lights. And no matter how much the couple insists they want to keep their lives off-camera, or that there isn't a spinoff on the horizon, persuading fans that the move has nothing to do with the latter will be pretty tough.

Aside from giving the couple trouble for denying any superstardom aspirations, Williams also had some not-so-nice things to say about Rachel choosing Bryan over Peter Kraus on the finale. Williams isn't alone, however. She joins the ranks of a slew of other Bachelor Nation fans who thought the Wisconsin native was a better choice.

Rachel addressed the fan criticism of being "desperate for an engagement" during her season during the interview. She told Williams,

Peter and Rachel's breakup was arguably one of the most heart-wrenching moments on television in 2017, but Rachel's lack of empathy for Peter during the Season 13 finale live show rubbed a lot of viewers the wrong way. Fan tweets during the Bachelorette Season 13 show a general consensus that Peter was the "better choice" for Rachel, and Bryan didn't seem to be there for the "right reasons." But according to the Dallas native, although she cares about Peter a lot, she still feels as though she made the right decision. She explained,

Williams definitely gave both Rachel and Bryan a pretty tough time while on the show, but it seems as though she was only trying to get honest answers to the questions many want to know. Did Bryan and Rachel actually find true love, or did they just want an opportunity to become famous, household names? Let the soon-to-be-married pair tell it, and the former is totally the case. Skeptics will just have to wait and see what happens next.

Editor's Note: A previous version of this story incorrectly referred to California as the Sunshine State, instead of the Golden State.