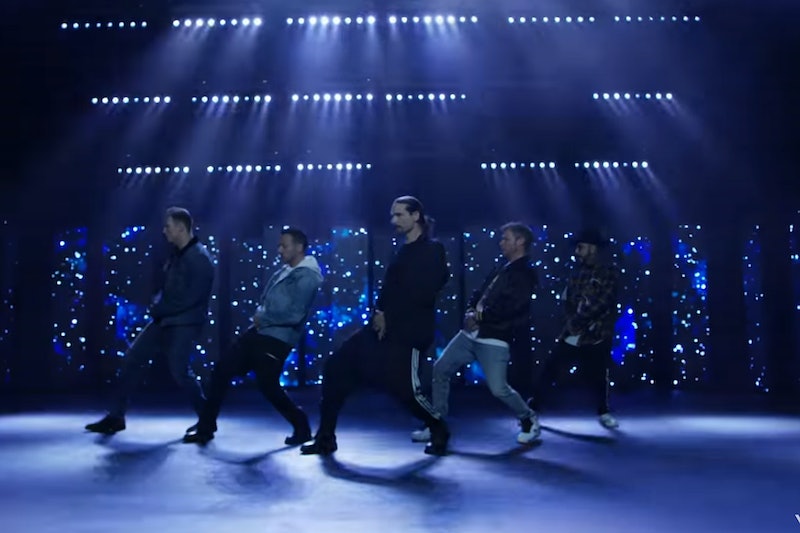 Backstreet Boys/YouTube
By Shannon Carlin
May 17, 2018

Backstreet's back with their first song in nearly five years. On Thursday, May 17, Backstreet Boys dropped a new video for "Don't Go Breaking My Heart" and it's a throwback to the early days. There's a whole lot of choreography that probably won't actually break your heart, but it likely will look super familiar.

"Don't Go Breaking My Heart" feels like a trip back in time for all those who grew up watching BSB's music videos. There are moves in this new video that look like they're straight out of their old ones. They recycled those "I Want It That Way" arm swipes (which they hated, BTW), and basically recreated the synchronized moves of "All I Have To Give." There are even flashes of the footwork that was on display in the "Everybody" video throughout this clip, which looks like it was inspired by Blade Runner 2049.

The track — their first since they dropped “Show 'Em (What You’re Made Of)” off their 2013 album, In a World Like This — will take fans back to the heyday of BSB. And in case you need a reminder how long it's been, Brian Littrell, Kevin Richardson, A.J. McLean, Nick Carter, and Howie Dorough recently celebrated BSB's 25th anniversary. And they're continuing that celebration by returning to their Las Vegas residency, Backstreet Boys: Larger Than Life in July.

But McLean teased on Twitter that there's even more new music to come from the Backstreet Boys. "I'm so excited for you guys to finally hear what me and the boys have been working on!!" he wrote on May 17. "This is just the beginning of the next @backstreetboys chapter."

Littrell also hinted that the guys were eager to release something new. “I want to create new memories. We’ve been singing the same songs for almost 25 years,” he told People in an interview published on April 20. “It’s not that we’re not excited to sing our old hits, but we want to grow, too. We don’t want to be stuck in what was. We want to continue to grow with our fans.”

On Thursday, Littrell told Entertainment Weekly that BSB recorded "maybe 10 or 12 songs and this one just hit." In that same interview, McLean said the new music is "reminiscent of old-school Backstreet Boys, like Millennium days, with a more modern twist to it. It’s a feel-good record" and is expected out in the fall. They're also planning to tour again in March 2019 for those who can't make it to Vegas, but still want to see the group live.

"Don't Go Breaking My Heart" is also the first new song from BSB since Nick Carter was accused of sexual assault by Melissa Schuman, who was a member of the girl group Dream. Last November, she wrote a blog post alleging that Carter forced her to have sex when she was 18. Through his rep, Carter denied the allegations in a November statement, saying he was "shocked and saddened" by the claims. "It is contrary to my nature and everything I hold dear to intentionally cause someone discomfort or harm," the statement provided to Bustle read.

In February, Schuman tweeted about filing a police report against Carter. She reportedly told Us Weekly in a statement, "I thought it was an option I could no longer pursue. A huge thank you to RAINN for empowering me to take this step." Santa Monica Police Department confirmed to Us Weekly that they received a complaint. (At the time, Bustle reached out to a rep for Nick Carter, the Santa Monica Police Department, and Schuman for comment, but did not receive a response.)

More like this
Now That 'Renaissance' Is Here, Let’s Revisit Beyoncé’s First Solo Album From 2003
By Grace Wehniainen
22 Movies On Netflix That Are Perfect For The Whole Family
By Bustle Editors
Selena + Chef Season 4 Was Filmed At Hannah Montana's Old Malibu House
By Jake Viswanath
Harry Styles' 'X Factor' Audition Didn’t Start Off As Well As You Thought
By Jake Viswanath
Get Even More From Bustle — Sign Up For The Newsletter