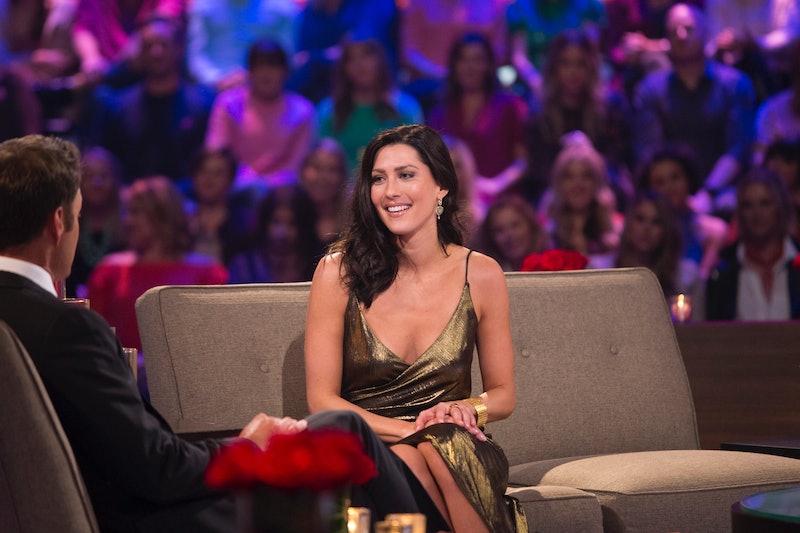 The next season doesn't premiere for another month or so, but Bachelor Nation was treated to a sneak peek on April 18 with Becca Kufrin's first Bachelorette photo. Chris Harrison had promised his 572,000 followers on Tuesday evening that he had "a little gift for you tomorrow morning," and come Wednesday morning, he did not disappoint.

The reality show host put up Season 14's first promo image, featuring the Bachelorette standing jauntily in a metallic, spangled dress with one hand on her hip and the other loosely holding a rose by her side. She smiles directly into the camera with fuzzy, out-of-focus rose petals floating through the foreground. Best of all, it brings the Minnesota-native's own personality into the shot with the text "Let's Do The Damn Thing" overlaid on the image. It's a phrase that Becca used often during her first season, and it bodes really well for her next one.

Because in addition to reassuring audiences that the show is still operating on schedule with a planned premiere date of May 28, Harrison's Twitter post also gives viewers a hint as to what they can expect from Bachelor Nation's next round. It'll be fun, it'll be straightforward, and blessedly, there don't seem to be any references — either veiled or otherwise — to Becca's previous experiences within the franchise. Just cross your fingers that that holds true.

There's still a chance that they'll go there in the longer promo, but it's refreshing to see this first image free of any references to Arie Luyendyk Jr. The race car driver's Season 22 of The Bachelor ended controversially, with Arie breaking up with and proposing to both his final women within a matter of months. The 36-year-old had proposed to Becca in the finale, but soon had second thoughts, and ultimately broke up with his then-fiancée to give things another shot with his runner-up, Lauren Burnham. (He then proposed on After the Final Rose, and the recently-engaged pair just moved in together in Arie's hometown of Scottsdale, Arizona.)

And while that history truly has nothing to do with Becca, especially as she continues her journey forward, it wouldn't have been a huge surprise to see all the drama referenced in the new season's promo. Not only was Arie and Becca's entire breakup filmed and broadcasted unedited, showing a willingness to engage with the material, but that sort of thing has been done before. A lead's romantic past is often cheekily winked at during promotion, like when Nick Viall helmed the series for Season 21.

The above promo made repeated reference to the fact that this was Nick's fourth time in the ring, and that he'd twice been left broken-hearted as a runner-up. And not only that, but it willingly invited more drama by showing contestants on the former software salesman's own season talking about how you either "love him or hate him." Kind of a weird foot to start a season on, but at the end of the day, ABC is in the business of making must-watch television, which can mean using whatever tools are in their arsenal.

That's why it's a relief to see such a clean, optimistic, positive image of Becca as the first photo from The Bachelorette. That "do the damn thing" attitude is the same one that viewers saw from her when she was meeting her first suitors on ATFR, so it's exciting to see that mindset extended into promotion for the whole season, as well. There's so much to be optimistic about going forward, and that tagline exemplifies just exactly why no one should be looking back.