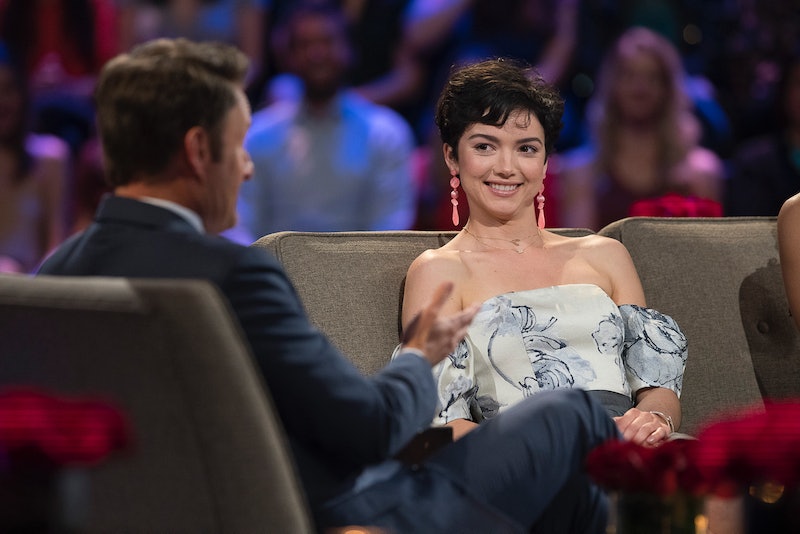 Bekah Martinez's appearance on The Bachelor only aired last year. But for the mom-to-be, it seems like a lifetime. Bekah's latest pregnancy update shows that her time with Arie Luyendyk Jr. is pretty much a distant memory at this point. As she announced back in September, Bekah is expecting her first child with her partner Grayston Leonard, and the baby could be here within the next month. Last week, Bekah shared a photo of a letter board stating that her little one is "arriving sometime in the next 40 days."

In an Instagram post on Tuesday, Jan. 8, Bekah reflected on how much has changed in her life since she was vying for Arie's heart on The Bachelor. She even made a reference to one of their first conversations, in which she asked him what made him excited to be alive — and his answer was "excitement."

The former Bachelor contestant shared a side-by-side image of her on the show and a picture of where she is now. She wrote in the caption, "A lot can change in a year...face and belly are a little plumper, heart's a little fuller. (but excitement still makes me excited to be alive)."

It was only last February that fans watched Arie send Bekah home from The Bachelor, after the show featured plenty of conversations about her age. But since her time on TV, Bekah has found love with someone who's not a member of Bachelor Nation. Grayston is a rock climbing instructor who owns a climbing facility in California, and he seems like a perfect match for the adventurous Bekah.

Bekah and Grayston started dating last year after she returned home from The Bachelor. She explained to PureWow that they had only been dating for three months when they learned she was pregnant. Both of them experienced plenty of emotions about the news, as they documented in a YouTube video. While she told PureWow that the pregnancy was unplanned, it looks like these two are more than ready to become parents.

Still, the fact that Bekah is in a relationship with someone who isn't part of Bachelor Nation doesn't mean she's lost interest in the franchise. Bekah is still issuing plenty of commentary about Colton's season of The Bachelor, both on her podcast, Chatty Broads, and on her social media channels.

For instance, in her series of tweets about the show's Season 23 premiere, Bekah referenced the age conversation that took over her time on The Bachelor. "When half the girls are under 25 and no one questions if they're ready for marriage," Bekah tweeted, along with a photo of her giving some side-eye. To be fair, she has a point.

Bekah is still watching The Bachelor as a fan. But as for her own time as a contestant in the franchise, it looks like that's way in the past for her. Bekah and Grayston are starting a new life together with their baby on the way, and it looks like they're leaving any Bachelor Nation drama behind.