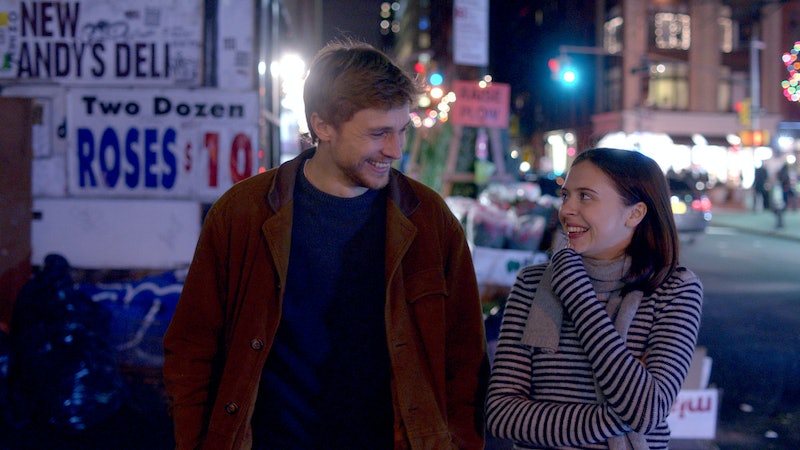 Carrie Pilby is just your average young woman living in New York, trying to get her life together — well, if your average young woman graduated from Harvard University before the age of 19. Carrie, a socially awkward genius who prefers books to people, is the protagonist of the new film Carrie Pilby starring Bel Powley (The Diary of a Teenage Girl). The movie follows Carrie as she decides to step out of her comfort zone and embark on social adventures to make friends and, just maybe, find love. In this exclusive video clip from Carrie Pilby, the character's social anxiety is on full display during an interaction with her hot neighbor, Cy.

We might not all be able to relate to graduating from an Ivy League college at 18, but I think one thing a lot of young women can relate to is Carrie's desire to never leave her apartment. Socializing is hard, and leaving your home to meet new people can be even harder, something Cy calls Carrie out on in this clip. After inviting her to an apology dinner, Cy mentions to Carrie that she has "a reputation around here for being a bit of a hermit." And, though she seems to know it's true, Carrie leaves in a huff — not exactly the beginning of an epic romance. That said, something tells me that this awkward interaction is just the beginning of a damn good love story. (And, no, I don't just think that because Cy is played by William Moseley, aka the cute guy from the Chronicles of Narnia movies.)

Based on the clip, it's clear that Cy's got his work cut out for him if he wants to get in Carrie's good graces. Carrie's strong will and aversion to social norms is actually what attracted director Susan Johnson to the project, which opens in limited release on Mar. 31, and will be available on demand and on digital Apr. 4. "I love that Carrie is a strong, intelligent, and funny young woman, but completely flawed like the rest of us," Johnson said in an interview with Women and Hollywood.

It's no surprise, then, that Carrie's story came to be told by women, not men. Carrie Pilby is very much a film made by women, about women, and for women. Based on a young adult novel of the same name, the screenplay was written by a woman, Kara Holden, marks Johnson's directorial debut, and has a multiple female producers. In fact, in the same interview, Johnson revealed that the film's female protagonist and female creative team added a huge challenge to simply getting the film made. "Getting people to pay attention to us was much harder than it should have been," Johnson said. Well, we're paying attention now.

More like this
Twitter Is Identifying With Sally Field & Jane Fonda’s Friendship In New Viral Video
By Jake Viswanath
Your Guide To Watching 'Everything Everywhere All At Once' In The UK
By El Hunt and Sophie McEvoy
Rihanna Shares Video Of 'Black Panther 2' Filmmakers' First Reaction To “Lift Me Up”
By Radhika Menon
Everything To Know About The 'Daisy Jones & The Six' TV Series
By Maxine Harrison and Brad Witter
Get Even More From Bustle — Sign Up For The Newsletter
From hair trends to relationship advice, our daily newsletter has everything you need to sound like a person who’s on TikTok, even if you aren’t.