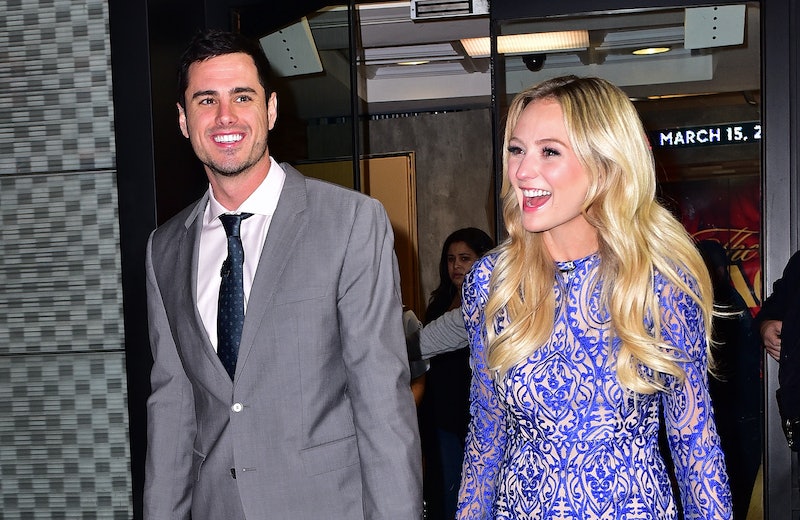 Bachelor Nation alum Ben H. only has kind words for his now-married ex-fiancée. When speaking with Us Weekly on Wednesday, Oct. 30, Bachelor star Ben Higgins wished Lauren Bushnell “nothing but the best” following her recent marriage to country singer Chris Lane. The former Bachelorette contestant also said that it would be “a little weird” of him to send his congratulations directly to Lauren, so he has “not reached out to her to wish her anything.” He explained, “I don’t know if my place is to congratulate my ex-fiancée on her new marriage, but from a distance I definitely did.”

Lauren and Ben met in 2015 while filming the 20th season of The Bachelor. They hit it off, got engaged on the season finale, moved in together, and were given their own Freeform reality series, Ben and Lauren: Happily Ever After? That question mark at the end of the show title ended up being prophetic: In May 2017, Ben and Lauren announced their split. In a statement regarding their breakup that was provided to People, Ben and Lauren said, "We feel fortunate for the time we had together, and will remain friends with much love and respect for one another."

Following her whirlwind Bachelor Nation romance with Ben, Lauren started dating longtime friend Devin Antin. They eventually split, and in Nov. 2018, Us Weekly confirmed Lauren was in a relationship with Lane. The couple got engaged the following June, and they tied the knot on Friday, Oct. 25. When Ben learned of Lauren and Lane's engagement, he took a moment on the June 18 episode of The Ben and Ashley I Almost Famous Podcast to celebrate his ex's news. Per People, he said, "Lauren, congratulations. We’re thrilled for you. You found a man that you love without any pressure and I could not be more excited for you." He also said his "life isn’t tied to her" anymore and hopes the engagement means "this is a chapter being closed completely."

Ben is currently in a new relationship, too. In February, he announced on Instagram that he is dating Clarke, sharing that they connected after he "successfully slid into her Dm's." When Us Weekly asked Lauren about Ben's new girlfriend in May, she said she is "so happy for him" and that Clarke "seems like a great girl." She added that they "don’t communicate all the time" because that "would be kind of weird," but she "[hopes] he’s doing well."

Ben and Lauren are not the best of friends or anything, but it sounds like they are in a supportive, respectful, and friendly enough place.