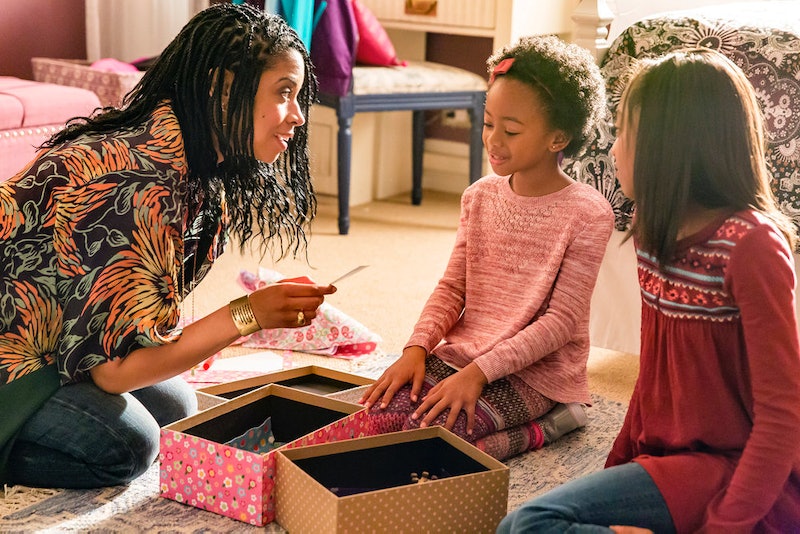 The Pearson women are in for some serious life changes this fall. As reported by Glamour, This Is Us' female characters are taking center stage in Season 2, but that means something different for each of them. For the family matriarch, Rebecca, it means the focus will shift to the aftermath of that massive season-ending fight with Jack in the past and toward a deeper exploration of who she is in the present. Meanwhile, Kate is facing new beginnings with her career and a potential wedding to Toby, and at long last, Beth is going to be given storylines all her own.

With filming of Season 2 not set to commence until later this summer, spoilers have been few and far between. Thank goodness for the Emmy for Your Consideration event and series creator Dan Fogelman. The evening inspired Fogelman to drop more than a few hints about what lies ahead for the Pearsons, especially the women of the family. The most exciting revelation is definitely that Beth will be doing more than supporting Randall and his family.

While there was never any doubt about Susan Kelechi Watson's talent, not much about the character of Beth was revealed in Season 1. Happily, it sounds like all of that is going to change in Season 2.

"I'm excited!" Watson said at the Emmy event. "We don't know as much about Beth yet, so to be able to explore her in a deeper way is just so exciting. There's the adoption thing, her family, her work, all these things…it'll be fun to explore all the different facets."

Seeing Beth come into her own as she deals with work, raising her kids, possibly adopting another child, and maybe even interacting with her own family has so much potential for drama. Watson and her onscreen husband Sterling K. Brown's chemistry was a highlight in the series' first year, so it would be amazing to see Randall offering Beth support as she deals with her own crises for a change. As a couple, they feel like they can get through anything together, and that just makes me more curious to see how Beth will react to Randall's desire to grow their family.

A character who had no shortage of storylines last year was Rebecca, but that doesn't mean there's not room for her to grow — particularly in the present. If you've been wanting answers about why Rebecca and Kate's relationship feels so strained, how she interacts with Kevin, and whether or not she can fully repair her relationship with Randall, it sounds like all of that and more is coming up in Season 2. Mandy Moore plays her character across decades, but it's the current Rebecca the show has explored the least. Seeing her interact with her adult children more could add a whole new layer to this already complex woman.

Then there's Kate. In Season 1, she was introduced as a person struggling with her weight. By the end of the year, she was in a serious relationship and embarking on a career as a singer. In many ways, it sounds like Season 2 is going to be the year of Kate as the show follows her planning her wedding to Toby and taking major steps to make her career goals a reality.

"Kate has a monster story this year involving both her singing career, her potential wedding, and then also her relationships with her brothers, with her mother, with Toby, etc."

As one of the few plus-size characters on TV allowed to be a fully fleshed-out leading woman, Kate is already one of the best parts of This Is Us, in my humble opinion. Knowing Season 2 is going to dig even deeper into her relationships and what drives her, only makes me all the more excited to see what's next for the only Pearson daughter.

By focusing on the life changes heading Kate, Beth, and Rebecca's way, Season 2 has the potential to be even more powerful than it was in its emotional debut season. I know I'm not alone in being psyched to see what happens next.