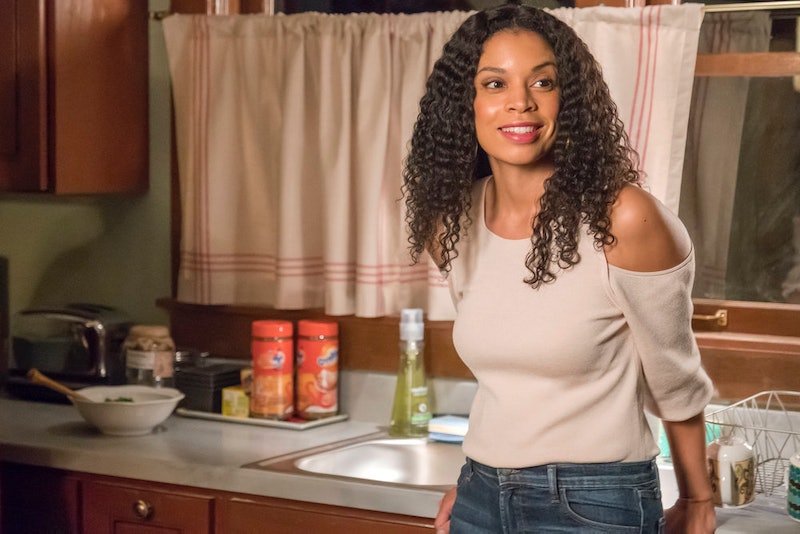 It's been a long time coming, but on Tuesday, Feb. 19, Beth will get her own This Is Us episode, and it's one that's expected to reveal how the character ends up running a dance studio in the future. In a new interview with Entertainment Weekly, Susan Kelechi Watson shared some hints about what fans can expect from the episode titled "Our Little Island Girl," and it really does sound like this episode is the one fans of Beth have been waiting for since the series began.

When she was first introduced in the pilot, Beth was a savvy business woman, supportive wife, and amazing mother. Her role throughout the first two seasons was to act as a voice of reason in a sea of Pearson problems. But in Season 3, Beth has been struggling after being laid off from work. She's on a path of self-discovery, and it's one that she'll be digging into as she returns home with her cousin Zoe to take care of her mother after it was revealed she hurt her hip at the end of the last episode.

According to Watson, a big part of the episode will be about showing viewers Beth's love of a dance — something that hasn't been explored until now. "She was willing to try hard and sacrifice to be a dancer; it meant everything to her," the actor told EW. "There's hope — and then there's regret."

Thanks to that illuminating flashforward from earlier in the season, fans know that Beth is going to find her way back to the world of dance and one day run her own studio. Before she can do that, she has to examine why she set her passion aside in the first place. And it sounds like that's exactly what this episode will do.

For her part, Watson's all in for whatever twists Beth journey is about to take. Executive producer Elizabeth Berger revealed to EW that the actor refused to have a stunt double take over during Beth's dancing scenes. Watson previously studied ballet, tap, and a number of other types of dance and she was more than willing to put her talents to use for ensure she got to tell every part of her character's story.

That level of commitment is one of the many reasons that Beth is such a standout character. Watson has put so much heart and soul into bringing her to life, and infusing Beth and Randall's marriage with a sense of realness that fans can't get enough of. It's only fitting that the character is finally getting an hour that dives into who she was before she met the Pearsons while also putting Beth on the path of who she's going to become in the future.

More like this
Taylor Swift Visited The 'Glee' Set For This Bizarre Season 5 Episode
By Grace Wehniainen
Linda Ronstadt’s “Long Long Time” Plays A Pivotal Role In The Last Of Us
By Brad Witter
You Might Want To Rewatch This Key 'On My Block' Scene To Understand 'Freeridge'
By Grace Wehniainen
A 'Terminal List' Sequel & Spinoff Are Reportedly In The Works
By Kadin Burnett and Grace Wehniainen
Get Even More From Bustle — Sign Up For The Newsletter
From hair trends to relationship advice, our daily newsletter has everything you need to sound like a person who’s on TikTok, even if you aren’t.