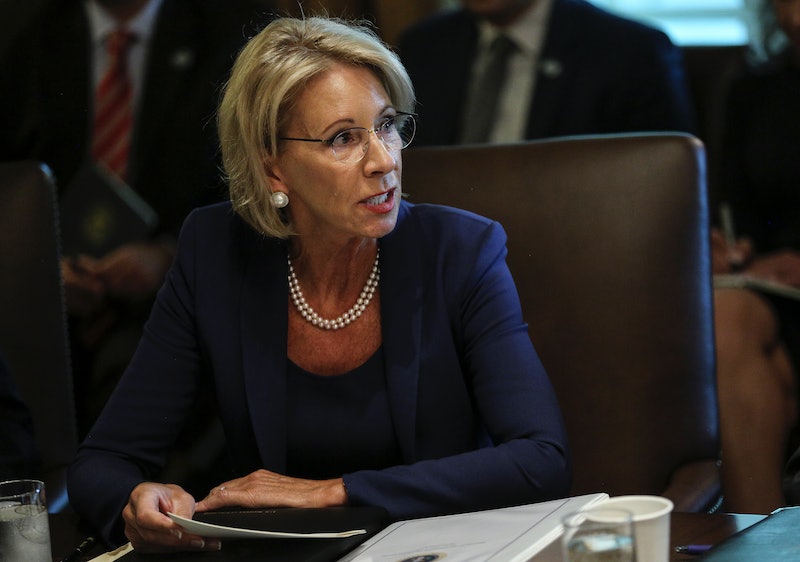 Over the course of two months, Education Secretary Betsy DeVos' proposed Title IX rules change received over 100,000 public comments. DeVos' proposal has been widely criticized by survivors' groups, as it would drastically narrow the definition of "sexual assault" while bolstering the rights of those accused of assault on college campuses.

Title IX was signed by Richard Nixon in 1972, and it prohibits gender discrimination in public schools. In practice, the Education Department decides how to interpret the law and how to apply it to allegations of sexual misconduct. DeVos' proposal would dramatically change how universities are required to address such claims in several ways.

Under the Obama administration, the Education Department defined sexual assault as "unwelcome conduct of a sexual nature." But DeVos' proposal defines in far more narrow terms, so that it only applies to "unwelcome conduct on the basis of sex that is so severe, pervasive and objectively offensive that it effectively denies a person equal access to the school's education program or activity."

In addition, the DeVos' rule would only require schools to address assault claims that allegedly happened on campus, or at school-sponsored events; as many critics pointed out, this would allow school administrators to effectively ignore allegations of sexual assault at fraternities, house parties or nearby bars.

The new proposal would also give alleged abusers the right to cross-examine their accusers, although not necessarily face-to-face, and allow schools to require a higher standard of evidence when adjudicating sexual misconduct claims.

In September, the Department of Education conducted an internal study to determine how DeVos' proposal would affect sexual misconduct allegations, the New York Times reported at the time. It found that the new rules would reduce the average number of yearly sexual harassment investigations on college campuses from 1.18 to 0.72, according to the Times. The average number of investigations per year on high school and secondary schools would plummet from 3.23 to 1.61, according to the same report.

Terry Hartle of the American Council on Education, which represents university presidents, called the proposal "the most controversial regulatory undertaking in the history of the Department of Education," and told the Washington Post that the number of comments it received is around 20 times the average for regulatory changes. Advocates for survivors of sexual assault have almost uniformly condemned the rules change, saying that it substantially weakens protections for survivors and potential victims.

"The proposed rule changes to Title IX put forward today for public comment by the Department of Education once again demonstrate that Secretary DeVos and her team lack basic empathy for survivors and do not care about campus safety," It's On Us Executive Director Tracey Vitchers said in a statement. "The results of these proposed rules would be devastating. Survivors would have fewer viable pathways to achieve justice, and all students would be less safe as they pursue their education."

Jess Davidson, executive director of End Rape on Campus, called the proposal "dangerous to survivors," and said that it "will return our schools to a time when rape, harassment, and abuse were swept under the rug." The National Women's Law Center wrote a 70-page letter to the Education Department arguing against the new rules, NBC News reports.

The Education Department is required to read and respond to all 100,000-plus comments, many of which are extremely critical, before implementing the rule.

"This is a dangerous, disgusting, and misguided attempt to dismantle protections for Title IX," one commenter wrote. "F*ck you, Betsy. You are a shame to all women and anyone who has worked hard to improve our education systems."