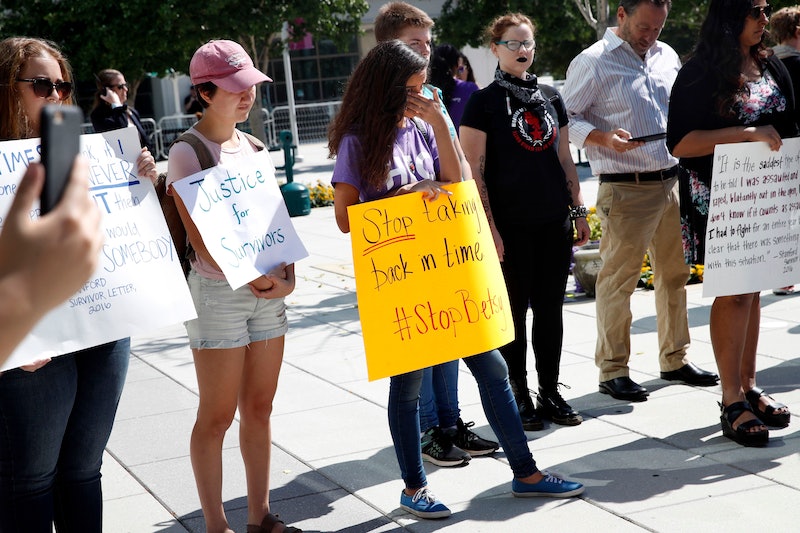 Late last year, when Betsy DeVos' Department of Education proposed changes to the federal standards for how schools should handle reports of sexual harassment, the outcry from anti-sexual violence organizations was swift. While much of that conversation has focused on how the potential rule changes would affect college students, campus sexual assault advocates say DeVos' Title IX rules would be just as dangerous for another group that hasn't gotten quite as much attention: K-12 students.

Title IX is a civil rights law that bans sex-based discrimination in any educational institution that receives federal funds. While the proposed changes would impact students of all ages, one rule that particularly worries advocates in regards to K-12 students directs schools to report harassment or misconduct that happens on campus. This would effectively absolve schools of responding to any incident that happens during social and sporting events off campus, and advocates worry it would also absolve them of responsibility for responding to cyberbullying.

"Students see and interact with their peers at non-school related events — like sports events and on weekends," Deborah Vagins, the American Association of University Women's senior vice president of public policy and research, writes in an emailed statement to Bustle. "Harassment there follows you into the classroom, and the classroom/school is a much more limited space in K-12, necessitating action on the part of the school."

When it comes to K-12 students, the fact that they're legally required to be in the classroom makes these proposed rule changes seem all the more dangerous to advocates working to end sexual assault in schools.

"This is contributing to a situation where the places that are supposed to care for [students], that are legally designated as 'in loco parentis' — as 'like parents' — when students are there, are not being required to protect students," B. Ever Hanna, campus policy manager for End Rape On Campus, tells Bustle. "And that is putting a lot of students at risk."

The way that sexual harassment is defined under the proposed rules, a school must respond when the behavior in question meets the standard of being "pervasive, severe, and objectively offensive." This would effectively disqualify one-off reports of harassment or misconduct. It could also potentially create scenarios in which students are forced to continue enduring abusive behavior, just because that behavior didn't meet an "objectively offensive" standard.

Experts point out this rule change could particularly affect boys, who are often left out of conversations about sexual harassment. As Hanna explains, a lot of behavior that an advocate would identify as harassment wouldn't also necessarily reach a standard of "pervasive, severe, and objectively offensive" — especially when it's happening to a member of a group that many perceive as impervious to sexual harassment.

"We’re a society that has some ideas about masculinity," Hanna says. "We may not view certain kinds of conduct as objectively offensive, but it’s actually really harmful to the students experiencing it."

Under the proposed rules, schools also are required to file Title IX reports only when certain people — teachers, Title IX coordinators, or officials who have the “authority to institute corrective measures" — are notified about alleged misconduct or harassment. By way of example, Hanna explains that if a student worked up the courage to tell a coach about an experience with abuse, that coach would be under no obligation to report it and the school would thus be under no obligation to act.

"This kind of rule sets up a situation where serial perpetrators like Larry Nassar can go undetected for a lot longer, because all of the people who those survivors were telling about Larry Nassar’s conduct would not be responsible for reporting it to the school," Hanna says. "It's pretty terrifying."

Those concerned about the ramifications of these rule changes still have a chance to make their voices heard, as the public comment period on the proposed changes ends Wednesday. Experts speaking to Bustle say that it's necessary to include K-12 students in the greater dialogue about DeVos' proposed Title IX rules, because sexual assault and harassment is no less prevalent there than on college campuses — even if it is, as Levin put it, more of a "hidden epidemic."

"These regulations are really misguided. They won’t improve the situation," Levin says. "They’re just taking the wrong approach here, and it’s going to do more harm than good if they approve these regulations."